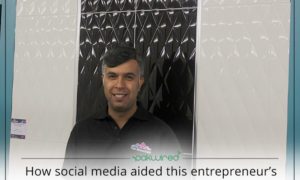 Technology often comes to Pakistan slowly and gradually, with much delay and interruption. It also takes a while for certain elements of technology to gain popularity and social media is no exception.

Compared to the rest of the world, the usage of social media in Pakistan’s society has been slow-paced in the past, however, in the last couple of years, the number of people on social media and its usage has expanded manifold.

One of the features or advantages has been the growth of several businesses using the online platform.

Mohammad Iqbal is one of many successful social media entrepreneurs that is running an online tiles business in the United Kingdom (UK) with annual revenues of $20 million and he hopes to double the turnover in the next two years.

Iqbal moved to the UK at the age of seven when his uncle adopted him due to his mother’s ill health and has been living there since. He started his career as a salesman in Topps tiles.

However, in 2004 he decided to leave Topps tiles and start his own business. “I started with one shop and worked there myself and within three years we had 32 branches. However, soon after I got a buy-out offer and continued as CEO until the company reached 100 stores.”

After that, Iqbal returned to Pakistan to take some time off where the rapidly expanding social media caught his attention.

Iqbal attributes his interest mainly to his kids who would buy items online and then share their purchases with friends using Facebook.

It did not take long for Iqbal to set up his own shop, aimed at creating an outlet only in the digital sphere. The company called Tile Mountain started operations in 2012 using only social media – Google and Facebook – for advertising and engaging bloggers who would review his products.

“The business has a simple model,” explains Iqbal. “In the beginning, we became a simple conduit. Ethernet the consumers and factories around the world, we would show the images of products and customers would place orders and we would arrange all the transport from factory to the customer’s house. Since we had no shops and a limited staff, we could offer the most cost-efficient price.”

Now, they are moving into a 120,000 square feet warehouse that will be used to stock products.

“Our customers can receive a sample of any tile they choose and then we can deliver at any address within 24 hours. I can also track the business from anywhere in the world as we have developed systems that allow us to profile our customers.”

But there are not many Pakistanis in the UK who run an online business and similarly in Pakistan not many businesses work online compared to the rest of the world, he says.

However, ample talent exists in Pakistan for developing online companies and they could become a major force in supplying services to the social media around the world, he says.

A well-known English company, just-eat.com’s software was developed in Lahore by Pakistani developers when it was launched.

Many businesses have IT back offices based in Pakistan, Iqbal says, adding the talent here is huge and the youth just need to be given an opportunity.

“But the lack of government policy for attracting foreign investment to nurture our youth and talent is allowing our best people to leave and work in foreign countries.”

Absence of decent IT parks and a very slow internet speed in the country are one of the main challenges to e-commerce, he points out. IT parks are like specific zones where the government can provide good infrastructure for companies like the Media City in Dubai.

Costs of setting up online stores using social media is significantly lower and carries two huge advantages such as no big challenges and mortar costs.

This post was originally published on: Tribune | image: realbusiness.co.uk