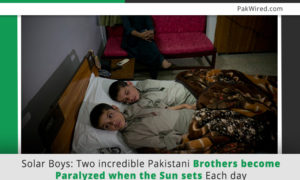 During the daytime, 9 year-old Abdul Rasheed and his 13 year-old brother Shoaib Ahmed are like normal kids – they go around, walk, laugh and play with their mates.

But as soon as the sun sets, the Pakistani brothers become immobilized, and are unfit to move or talk again until next morning. It’s the first case of its kind, and doctors have no idea what is causing the problem.

“We took this case as a challenge,” Javed Akram, a professor of medicine at the Pakistan Institute of Medical Sciences (PIMS), told the Associated Press.

“Our doctors are doing medical tests to determine why these kids remain active in the day but cannot open their eyes, why they cannot talk or eat when the sun goes down.” he maintained.

The brother have been labeled the ‘solar boys’, and since the beginning of this year, they have been under treatment in a hospital in Islamabad. Their treatment is all free of cost and so far they have undergone more than 300 medical tests.

The condition was somehow related to the light itself, rather than the time of day. It’s like they are getting their energy from the Sun.

But that assumption has now formally been ruled out, because medical specialists showed that the ‘solar boys’ were able to move around and walk during the day in a dark place.

Doctors have also shown that the boys are not suffering from short-term paralysis caused by nerve breakdown, or sleep paralysis: The state where our body remains effected (paralyzed) during sleep while the brain stays functioning.

This unique condition is somehow related to genetics, keeping in view the fact that the boys’ parents are first cousins, a practice that is common in Pakistan.

However, the doctors are not sure which genes could be having such a remarkable, isolated and severe effect on brothers’ behavior.

The family has lost another pair of brothers, apparently from the same disorder; however, their sister is unaffected.

The doctors are now collecting soil and air samples from brothers’ home, and have sent their blood samples abroad for detailed analysis.

The positive thing is that the doctors have been testing a range of medicines on the boys to help ease the condition, and has had remarkable results.

Hopefully over time, with more research, we will find the root cause of the disorder, it will help anyone else who is going through the same problem.