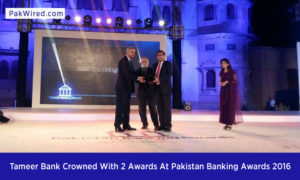 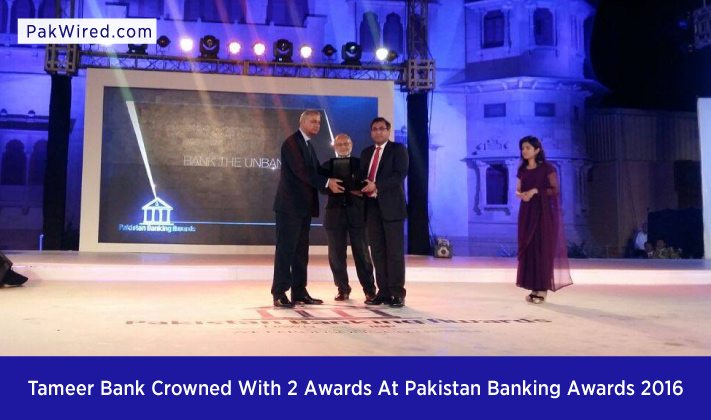 Microfinance is a source of financial services for underprivileged entrepreneurs and small businesses lacking access to banking and related services. Tameer Bank is one such and the first Micro Finance Bank Limited in Pakistan and a part of Telenor Group.

Incorporated in 2005, Tameer Bank is inspired to make a difference in peoples’ lives through inclusive financial services. Their aim is also to become the most innovative microfinance bank in the world. They provide microfinance, branchless banking and related financial services targeted to the undeserved segment. In 2009, they were partnered with Telenor to jointly launch ‘EasyPaisa’ – Pakistan’s first and largest branchless banking solution.

Pakistan’s First Banking Awards 2016 were held at the Mohatta Palace recently in Karachi. Tameer Micro Finance Bank was crowned with two prestigious awards at the occasion. The first one was for being ‘Best Micro Finance Bank’ while the second award category was ‘Bank the Unbanked.’

In terms of expanding outreach through penetration, innovation, efficiency and access to low-income communities across Pakistan with strong boom and social impact, Tameer Bank was awarded with ‘Best Micro Finance Award.’ Tameer Bank, through its Microfinance leadership and branchless banking services is committed to accelerating socio-economic development.

The award of ‘Bank the Unbanked’ recognizes Tameer Bank for all the hard work that the bank has done for the financial inclusion in Pakistan. Tameer bank has paid most attention to financial inclusion by expanding its outreach through rural and low-income urban penetration and diversification among all segments of accounts holders, including female account holders.

As the first microfinance bank and the financial powerhouse behind Easypaisa, Tameer Bank has brought financial services to millions of Pakistanis, with over 75,000 touch points and more than 21 million active customers.

Speaking at the occasion whilst receiving the awards, the newly appointed President and CEO of Tameer Bank said that:

“We are humbled to be recognized as a leader at the highest level in the industry. Our strategy is about transforming ‘banking-for-a-few’ to ‘banking-for-all’, it’s about moving the long drawn out processes and exorbitantly expensive access to money for the unbanked, to instant digital fulfillment at an affordable cost. We take pride in leading the drive to innovate within the country’s financial ecosystem and this award is a testament of our success to date.”

A total of 28 banks competed for 8 categories. They were adjudged on the basis of their evolution and performance as well as their current standing in Pakistan. The jury consisted of the President and CEO of Pakistan Institute of Corporate Governance, Fuad Azim Hashimi; Chairperson of State Life Insurance Corporation of Pakistan, Nargis Ghaloo; former Banking Mohtasib, Pakistan and former country head of SCB Pakistan, Azhar Hamid; former SBP governor Syed Salim Raza; and former regional head of Citibank Middle East and Pakistan, Shehzad Naqvi.

Tameer Bank believes in keeping up with its mission of improving lives of people of Pakistan by building the ecosystem for the unbanked through innovation, best in class talent and customer care, in a sustainable manner.