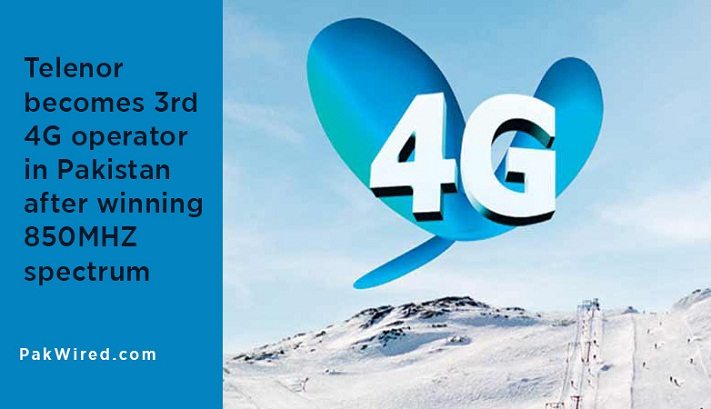 Telenor, which is an existing 3G mobile broadband internet service provider in the country, was the only bidder for the spectrum auction, Next Generation Mobile Services (NGMS). There were certain rules and regulations that were well-defined prior to the auction and Telenor’s paperwork was found to be comprehensive and accurate, according to PTA.

At present, 3G services of Telenor runs on 5MHZ block on 2100MHZ band. However, the new license would allocate it another 10MHZ block on 850MHZ band at a base price of $395 million. PTA stated in the information memorandum for the award of 850MHZ spectrum:

“In case where the auction is not required due to no-excess demand, the applicant that submits a pre-bid offer, supported by a correct pre-bid deposit, is awarded the amount of spectrum stated in their pre-bid deposit form”

During the successful spectrum held in 2014, the base price was held at $295 million but the authorities incremented the base price this time around by 34% to take it whopping $395 million which has been successfully won by Telenor Pakistan.

Information and Communication Technology (ICT) expert, Parvez Iftikhar, said that the singe bid did not surprise him. He stated that:

“It was expected. The bandwidth and frequency offered by PTA only suited Telenor”

According to the PTA, frequency assignment tenure will be 15 years. Telenor Pakistan will also become the 3rd network operator in Pakistan once the announcement will be made officially. The timeline, however, of launching 4G service is yet to be disclosed.

It is now expected that major cities of Pakistan will be offered rapid and reliable 4G service after the attainment of 4G license. After winning the spectrum license, Telenor Pakistan will definitely look to attract users from other networks as well. They would be keen to maintain the quality and in the customers would be satisfied with Telenor once they will be shifted from 3G to 4G.