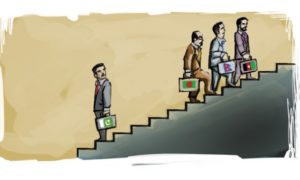 This is a guest post by Liam Massaubi who is a Canadian businessman and has done business in Pakistan for many years.

Pakistan can be a great place to do business or it can be your worst nightmare. Pakistan is ranked 128 out of 189 countries in the World Bank’s “Ease of Doing Business” index.

The majority of Pakistan’s problems come from structural imbalances in the government. I’m not trying to put Pakistan down. Instead my list of ten reasons why western companies may be avoiding the country all together is offering insight from the perspective of a western buyer.

Time used related to cultural differences. When you have two cultures, you have business being conducted in different manners. While in Pakistan not many are direct with answers, in the west we require direct answers. I have found it rare in doing business with Pakistan to hear a direct “no”. And when there is one, it often comes at the last minute which is the worst time for a western business. Many manufacturers in Pakistan will often say they can do things that they can’t and things change last minute. This runaround is a major waste of time to the structured and often time pressed western business.

Energy and Transport. There are often power and communications outages that account for substantial losses in productivity. The transportation infrastructure is a major concern for many and there is often shortages of oil and gas. Combined these pose a substantial risk to the flow of business and makes manufacturing unattractive to western investment.

It is nearly impossible to recoup losses. I have not met a manufacturer in Pakistan that will cover losses even if the mistake is on their end and there is more business ready. In western business, we would keep the flow going and for example often give out free samples or pay for our errors to retain clients. Having to continuously pay for a manufacturer’s errors though can be extremely frustrating.

There is also no real recourse if a western business is scammed. Although this does not happen that often, it still happens. While you can lose money anywhere overseas, an inability or unwillingness of law enforcement to assist a western business only adds to the list in Pakistan. e limited capital. In 2012 Pakistan was ranked 127 out of 177 in Transparency International’s corruption perception index (CPI)

Aggression, attacks and unrest scare people. The ease of doing business drops with perceived or real growing militancy, violence and political, ethnic and religious division. Whether it is fair or not, all a westerner sees is what is on the news and all the warnings given. Many governments issue warning to not travel to Pakistan as the country is considered dangerous to do so.

In some cases, direct threats have been made to western businesses as a form of retaliation against a western government. This makes foreign business very wary especially smaller businesses who do not have the resources of large multinational corporations.

Money is difficult to move. As with many things in Pakistan, moving money is not as smooth of a task as we are used to. Bank wires take time and sometimes do not reach the manufacturer’s account. Not many manufacturers are able to process credit cards. Online payment services will not operate in Pakistan for the most part and Western Union provides no real recourse to recover your money. We are often limited to amounts we can send. Not to mention looking potentially suspicious to domestic authorities sending money to a country considered dangerous by our government to someone we do not really know. This can turn in to an absolute mess.

No long-term vision. If a country doesn’t have a real long term vision on business, the focus on the here and now can create chaos and many problems can arise when you’re not working toward a real end goal that long-term business relies on. This instability is too big of a gamble for many westerners.

Intellectual property rights. Much like China a western company really has no intellectual property protection. In 2005, the Government of Pakistan established the Intellectual Property Organization of Pakistan (IPO) to try and combat piracy but many consider it fairly ineffective. While this may not throw everyone off from manufacturing, added to the list of other concerns it can be considered problematic.

Communication often deteriorates. What is considered rude in Pakistan may be normal here and the opposite. More companies than you would think develop a toxic relationship with their manufacturer because they unknowingly disrespect each other during communications. While you would think many businesses would research appropriate etiquette, many don’t because they quite frankly don’t care to do so. Communication can turn to nothing and it doesn’t work out well for anyone.

Costs are increasing. Costs are increasing on many items. T-shirts for example can get up to close what they cost to manufacture domestically and a company saves the transport, import and hassle of dealing with down times. Of course costs will always rise as stability drops but if a company can do it at the same cost domestically there is no need for Pakistan in the equation at all.

Production is too slow and times are not often met. There is a more laid back approach to production in Pakistan and we must not forget about lost productivity due to power loss, floods, unrest or other outside cause for delays. Whatever the exact reason, production can take twice as long as other countries and the western markets do not wait on anything. For this reason, Pakistan is a real gamble if you need something done on time as it rarely is. If you have customers or retail waiting they do not want to hear about ground problems in Pakistan causing delays.