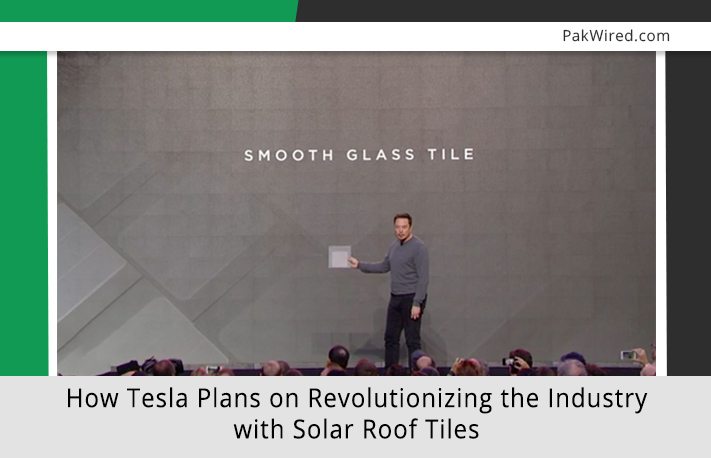 28th October, 2016 is a day that might as well go down in history because it was on this day that Tesla’s Elon Musk unveiled his newest product: Solar Roof Tiles. Working on the same principle as any conventional solar panel, these tiles aren’t just efficient and eco-friendly–they make a fashion statement too.

Usually, when it comes to going green, people consider themselves above caring about minor details such as the looks of a thing, especially when the said product performs well. However, in his very recent demonstration, Elon Musk proved that when it comes to efficiency, eco-friendly items can be made beautiful too.

Inviting a small group of media and tech personnel on the set of the famous soap opera, Desperate Housewives, Elon introduced the world to Solar Roof Tiles. These tiles come in 4 styles that are commonly used and preferred for roofing tiles across the states: Textured Glass, Slate Glass, Tuscan Glass and Smooth Glass. The tiles are designed in such a way that when viewed from the street or even up close, the tiles look like ordinary roofing tiles. It is only when viewed directly from the top, i.e. the sun’s vantage point that these tiles reveal themselves to be the solar cells they truly are. Suffice it to say that the tiles are disguised well enough to make anyone believe that they are traditional roofing tiles due to their beautifully conventional design.

However, when it comes to the benefits of buying these Tesla tiles, beauty isn’t the only selling point, not by a long shot!

Musk claimed that his tiles can not only completely power a house, but they can also provide a spare backup thanks to the newly unveiled Powerwall 2 battery. This backup will especially help during bad weather conditions and/or other outages. Coming to the financial side of the matter, Musk said that the cost of installing these tiles along with the Powerwall 2 battery will still be less than the cost of installing a roof the conventional way along with paying for power bills.

Another plus point to these tiles is their resilience. The Tesla Roofing Tiles are tougher than conventional tiles including Terra Cotta, Clay and Slate tiles. This, Musk claimed, was due to the toughness of the glass that goes into the making of these tiles. He demonstrated the tiles’ toughness by comparing them with terra cotta, clay and slate tiles and dropping a kettle ball on each in turn. Only the Tesla tile was able to withstand the extreme weight and impact of the hit.

When talking about projects that are still in the pipeline, Musk said that by the time these tiles are made available to the masses, they might undergo still many more improvements. He said that he was currently working with 3M in order to improve the coatings of the tile so the light that is captured by the tiles gets refracted within the glass in order to utilize more of the potential energy the light carries so that it can be turned into further consumable power. Until now, the Tesla tiles work at 98% the efficiency of normal solar panels.