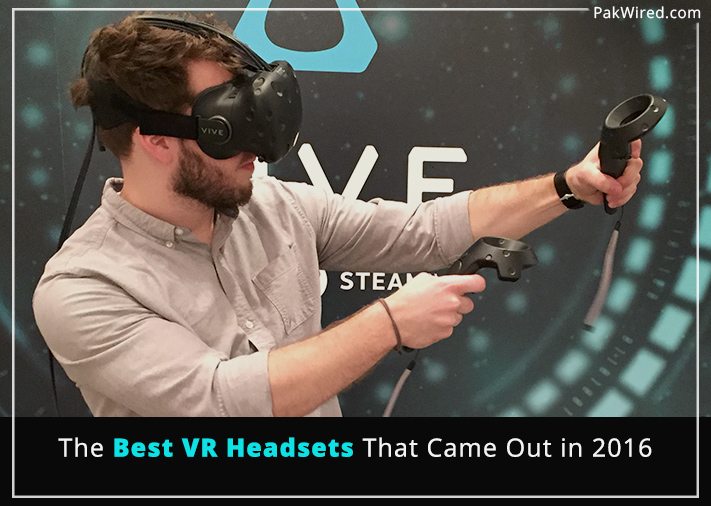 2016 might be a controversial year in many ways but for the world of Virtual Reality, it has been the best year yet. During this year, the consumer has accessed the Oculus Rift and has even had a taste of the first CONSOLE-POWERED VR HEADSET!

However, with all these cool gadgets basically flooding the market at this very moment (with many more to come in the beginning of 2017) it gets very hard to choose, especially if it’s your first time buying a VR Headset. Hence, if you’re feeling swamped with too many options, let us help narrow everything down for you!

Right now, this is the headset you can purchase without any second thoughts. If you don’t want to skim through the long lists of specifications and are troubled by the idea of comparing all the features each product has to offer, you should just go with the HTC Vive. This is because this headset has a bit of everything to it. Even though the pixel density isn’t great, the view is still 1080p. The headset lets you walk around your room and tracks you for up to 4.5 square meters.

The only downside to the Vive is the fact that it costs you an arm and a leg. In fact, this little monster will cost you as much the gaming PC you’ll need to run it so it’s not really an option if you’re on a very tight budget.

Up until now, we’ve learnt that one needs a pretty heavy gaming PC to run both the Oculus Rift and the HTC Vive. However, that’s not the case with the PlayStation VR because this little number only requires a PS4.

Even though the PS VR costs around half of the HTC Vive, it’s still a pretty nifty gadget. This headset is a surprisingly capable gadget with an impressively adequate refresh time and headset tracking.

The biggest catch (and it’s sadly a negative one) with the PSVR is the fact that it doesn’t come with a PS4 Camera nor the PS Move Controllers you need to run the headset so when you add all those additional costs, your budget gets stretched slightly further than you were expecting it to.

Don’t be fooled by the predecessing two names in the list, the Oculus Rift is still one of the best bets at buying a VR Headset you’ll have. This is because the Oculus was the first of its kind and despite a few glitches; it’s still in our top-3, especially if you’re a bit of a spendthrift.

This headset is perfect for those who don’t want to invest in the HTC due to space issues.

This one’s for the smartphone junkies out there. If you just want a portable taste of the VR experience, this one’s for you. The Samsung Gear VR was the first headset launched in the market by Oculus and though we’ve progressed much since then, it’s still one of the best you can ask for.

All you need for this headset is a phone as recent as the Note 4 or further, download a few games off the Playstore and there you go!

Let’s call this the poor man’s VR. Like its name so bluntly puts it, the Google Cardboard is in fact, made of cardboard.

A lot of techies call this headset a joke but hey, if you’ve got a weekend to kill and wanna see what the fuss is about, just download the instructions off the internet (which makes this the most affordable headset since it’s free!) or purchase them from a vendor (even the most priciest of Google Cardboard headsets are well under the 100 dollars range). Once you’re done with that, just download the Google Cardboard app to your Android or iOS phone and viola! Even though this Headset might not be the best, it’s still pretty good and fun to use when you’re bored and looking for a good time-kill.