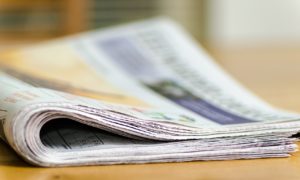 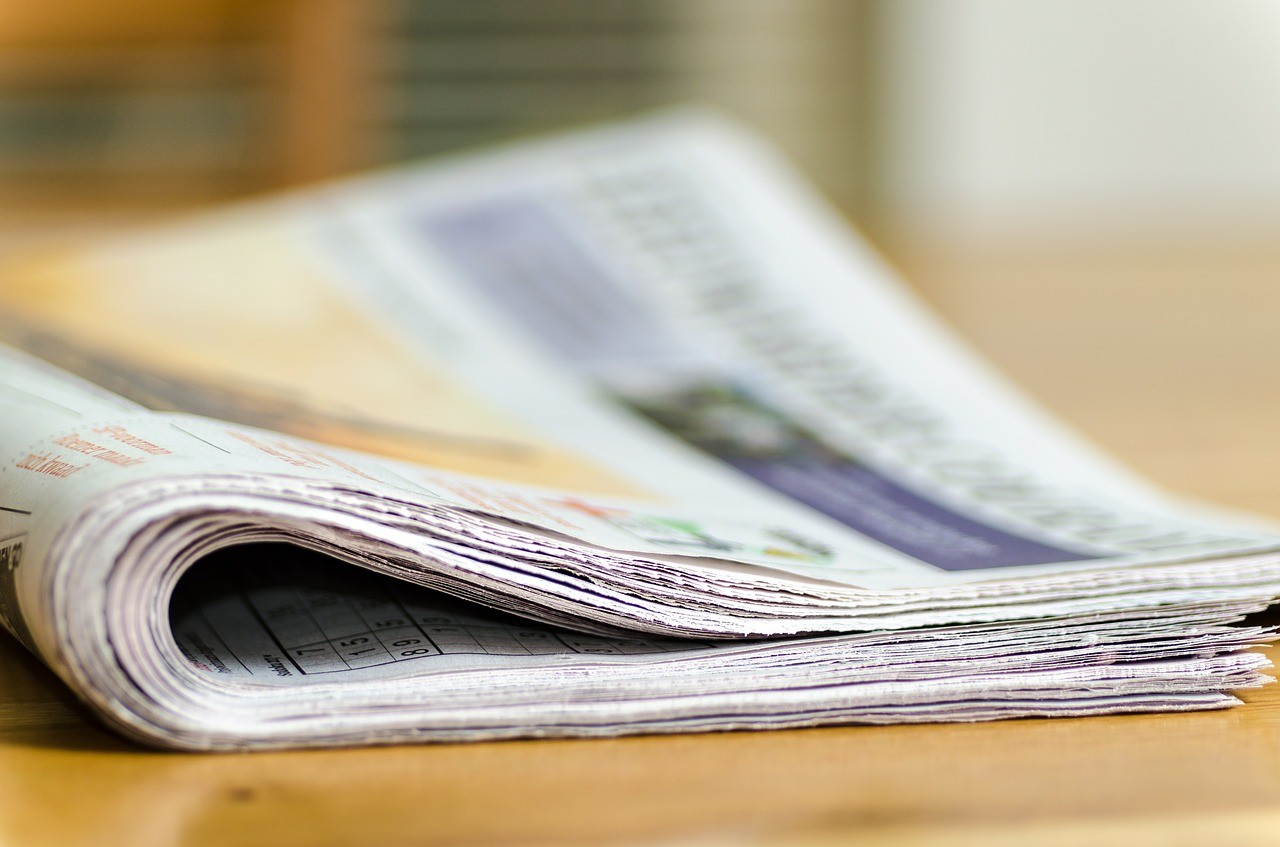 Are you someone who likes to read their newspaper every morning, or would you rather get your news online via Twitter or newsfeeds? Some people even like going through online editions of their favorite newspaper, rather than getting the print version.

Here we’ve taken a look at the five main Pakistani newspapers (English-language) in the country, based on popularity online, and taken a look at their websites and social media profiles. Follow your favorites on Twitter to get the latest news in an instant. 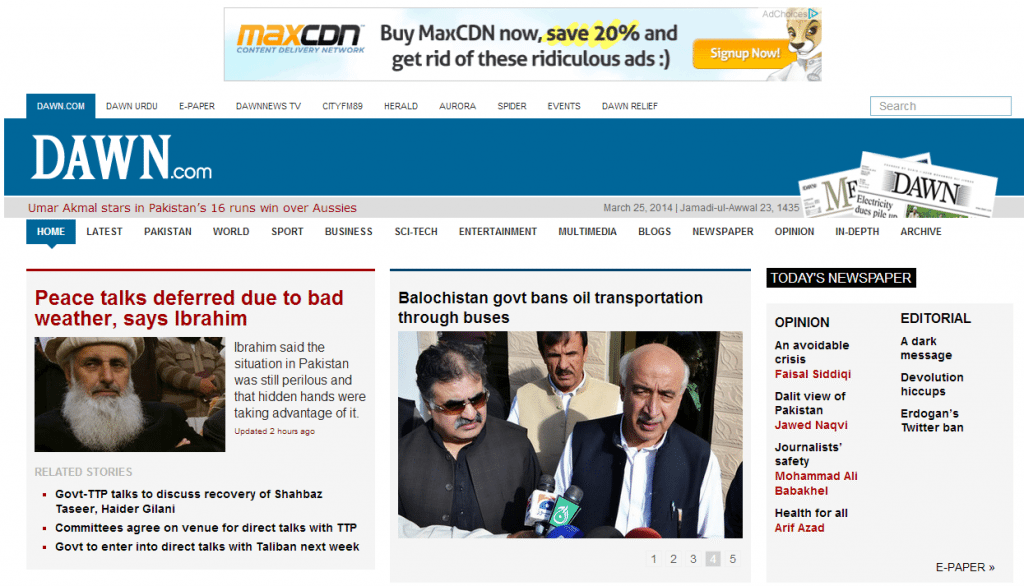 Pakistan’s oldest English-language newspaper, Dawn also has one of the largest reader-base. The newspaper was founded by Quaid-i-Azam Mohammad Ali Jinnah in Delhi, India on 26 October 1941, so that the Muslim League would have a voice in the community. It is owned by the Dawn Group of Newspapers.

A few years ago, Dawn revamped it’s website. The revamp has made the website a lot easier to go through, with interactive features like polls on the main page. You can browse through articles based on number of views and recent comments. You can also go through a popular “author” tab to get to specific columns quicker.

Based out of Lahore, The Nation is part of the NawaiWaqt Group which also owns a large Urdu-language daily paper and a television channel – Waqt News. The NawaiWaqt group started in 1940, so the newspaper is part of a media group older than the Dawn Group of Newspapers. It also has a stronger reader base in Punjab.

The website has a strong layout – and is similar to other major papers’ websites. Along with links to social media, you can also download the iOS or Android app to catch up on your daily news.

The News International – Launched in 1991 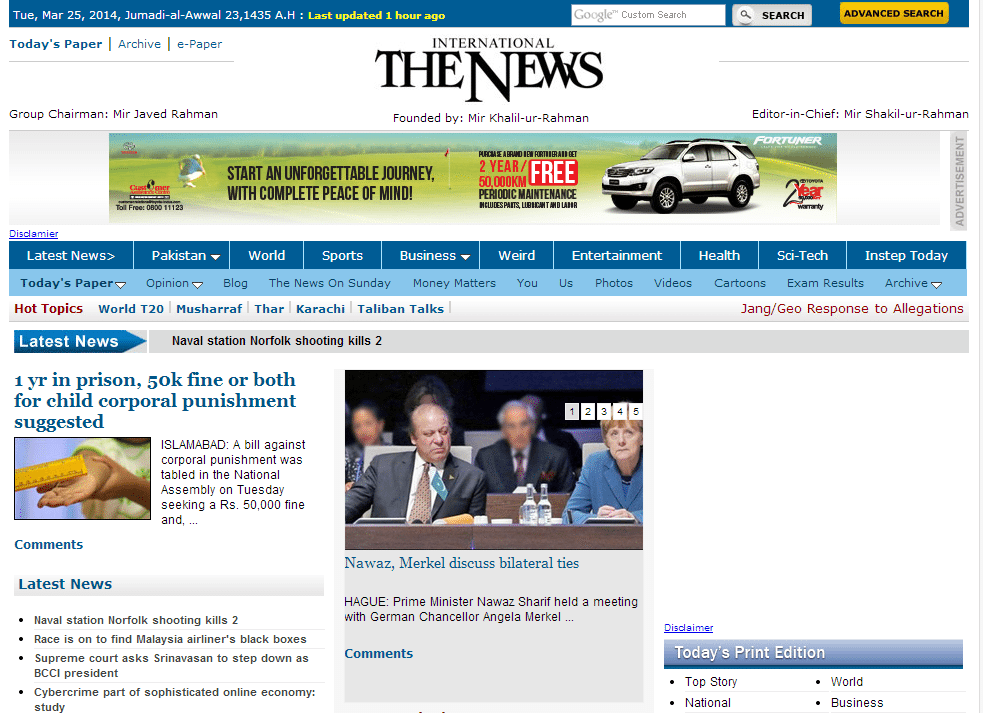 At a 140,000 strong circulation, The News International claims to be the largest Enlish-language newspaper in the country. Published in four cities, including London, there is currently a plan to also launch a New York City publication. Owned by the Jang Group of Newspaper, who also own the very popular Geo News and related channels – The News International is one of the most popular newspapers in the country.

Unfortunately, out of the top five papers, The News International probably has the least impressive website. It’s simple, and easy to go through, yet at the same time too crowded with widgets and columns. In an attempt to get a lot of information on the main page, the newspaper has managed to make the home page very confusing. 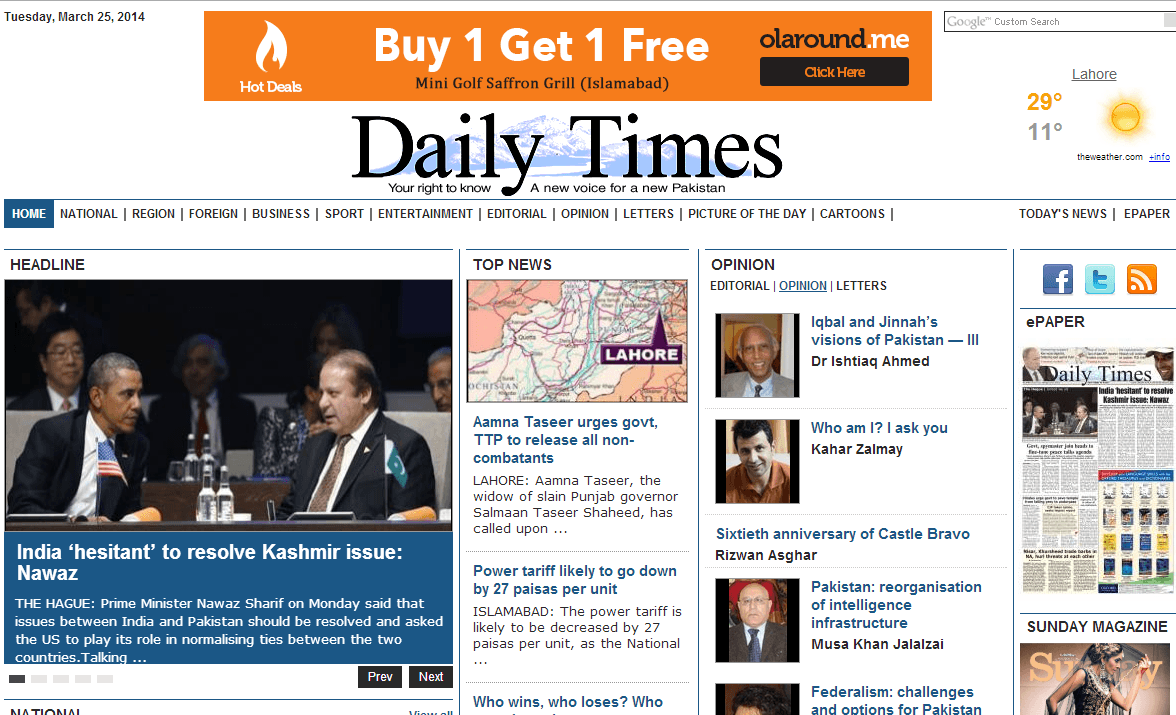 Owned by the late Governor of Punjab and Pakistan Peoples Party stalwart Salmaan Taseer, the Daily Times is published in three cities – Lahore, Islamabad and Karachi. A liberal, secular newspaper, it is popular for its editorials, not just in Pakistan but also abroad.

The Daily Times website is in need of an overhaul to make it easier to go through, and more visually appealing. It has the same crowded look that The News International website carries, and that the Dawn website used to have until a few years ago.

The Express Tribune – Launched in 2010 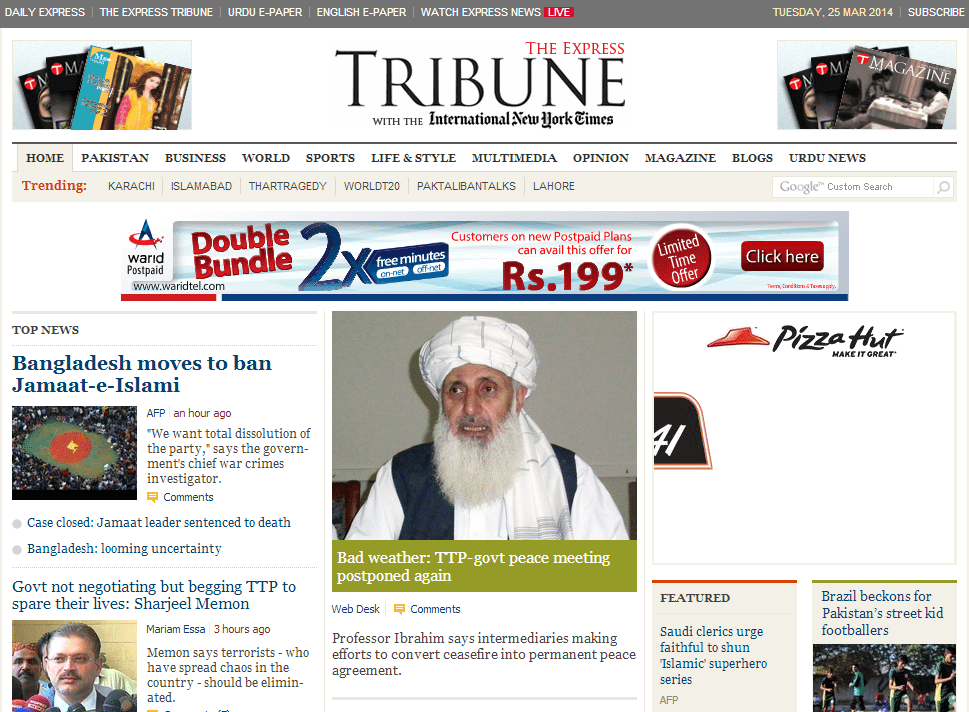 The country’s only internationally affiliated newspaper (with the International New York Times) it is printed in Karachi, Lahore, Islamabad and Peshawar. A social liberal newspaper, the readership is mostly on the mainstream left of political opinions. The paper has a popular blogs section, and was the first newspaper to allow users to leave comments on columns.

Most local newspapers started realizing the importance of website, and online readership, after The Express Tribune started dominating the online reader-base. This is largely due to their well-designed website, strong presence on social media, and popular blog section which allows readers to submit their own opinions.

While the above five newspapers stood out for being larger publications, with a wider readership, the following three stood out as being unique in other aspects. 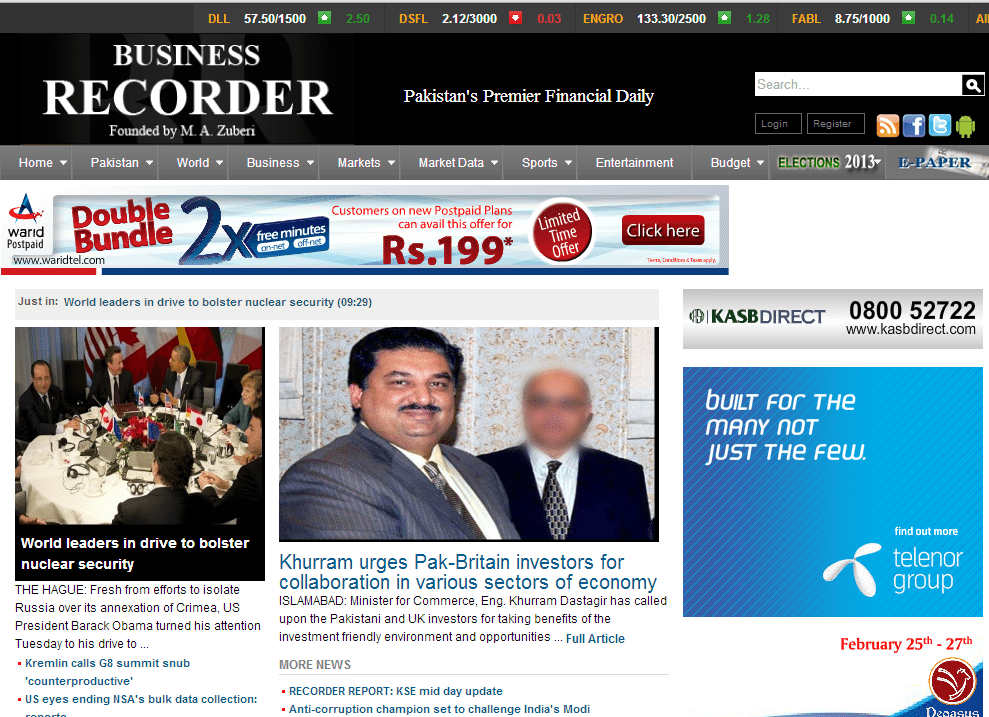 True to its roots, the Business Recorder website is geared towards the financial industry. There are several widgets showing the latest stock market reports, which is probably perfect for someone looking for a quick update. 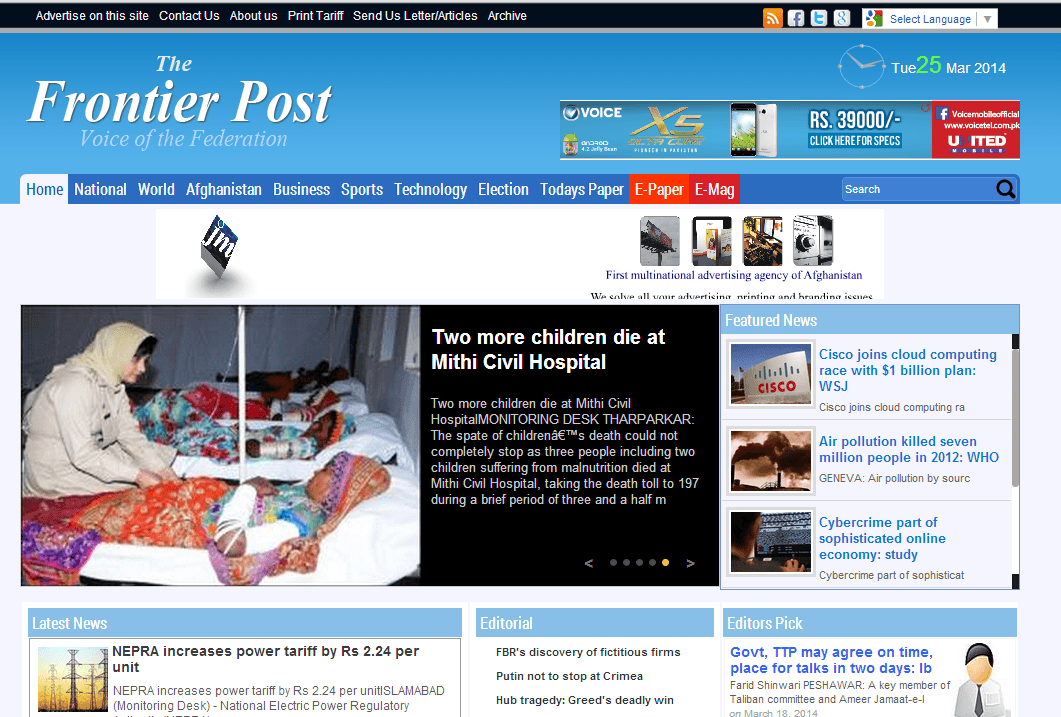 The only English-language paper to circulate in both Afghanistan and Pakistan, The Frontier Post, is based out of Peshawar. We believe this earns it a mention in this post. Unfortunately, their website is not very pleasing to the eye, and (to our great surprise), the links for their social media profiles are not correct. We found the correct Twitter link and posted it below, should you want to stay up to date on KPK events. 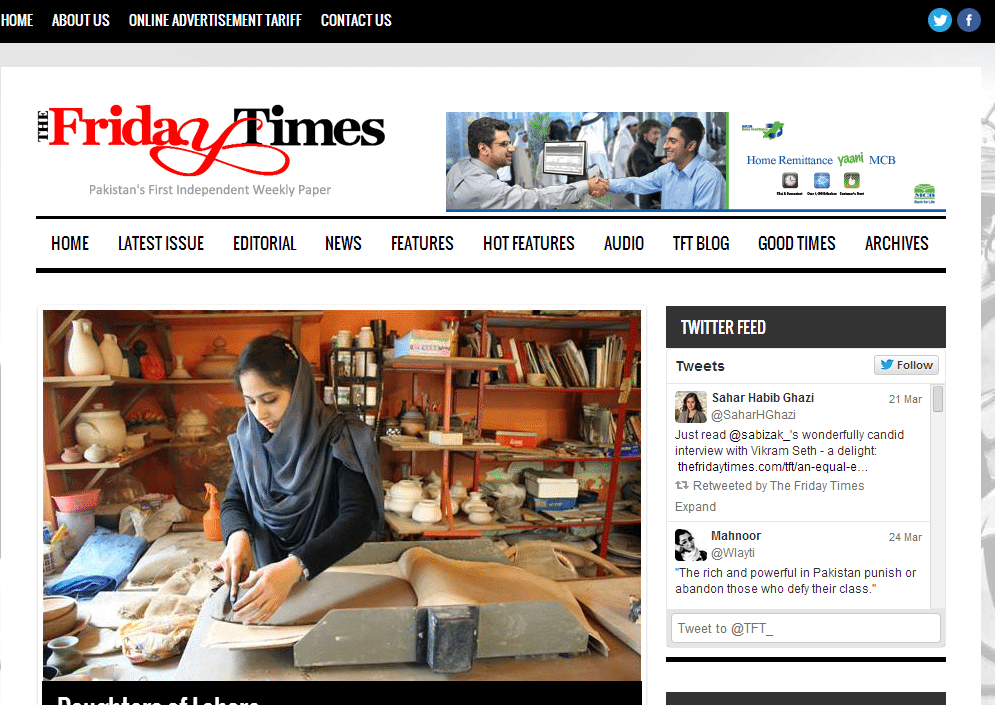 The Friday Times is not a daily, but it is a newsweekly. The unique thing about it is that it was set-up by Jugnu Mohsin and Najam Sethi, but when they applied for permission to start the paper, Mohsin said it would be, “a social chit chat thing, you know, with lots of pictures of parties and weddings”. The independent, liberal, weekly is much more than that. You can read the very interesting account of how and why it was set-up over on the website itself.

The website is well-made and easy to navigate. It is possible to browse through editorials and features from the main page, and columns like “Diary of a Social Butterfly” are easy to find. Links to social media accounts are visible in the top navigation bar, but you can also go through their Twitter feed on the website itself.

Which paper do you read? Do you prefer to get your news online, or do you like reading the print version of a paper? Leave us your comments!