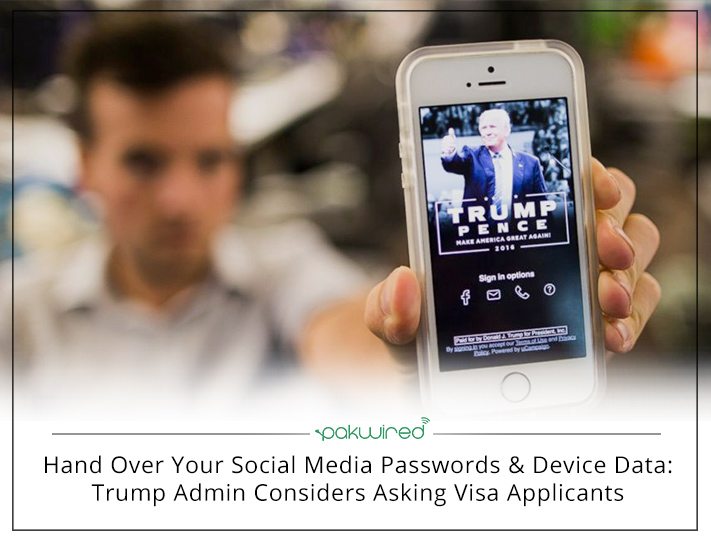 Among news of Trump‘s refugees ban, court’s suspension orders and demonstrations against a presidential executive order banning entry of Muslim majority nations, another aspect of Trump administration’s immigration policy has been overshadowed: American embassies could ask visa applicants for passwords of their online social accounts in future background inspections.

Maintaining security amid the threat of terrorism remains high on the agenda of Trump administration. During a hearing of the Homeland Security Committee on Tuesday, Secretary of Homeland Security John Kelly was quick to point out that

“We’re looking at some enhanced or some additional screening. We may want to get on their social media, with passwords.”

Mr. Kelly underscored that it is one of the options under consideration particularly  for immigrants from seven Muslim majority states with very weak vetting process of their own —  Iran, Iraq, Libya, Somalia, Sudan, Syria and Yemen.

“It’s very hard to truly vet these people in these countries, the seven countries. But if they come in, we want to say, what websites do they visit, and give us your passwords. So we can see what they do on the internet.”

“It’s very hard to truly vet these people in these countries, the seven countries… But if they come in, we want to say, what websites do they visit, and give us your passwords. So we can see what they do on the internet.”

Moreover, he stressed any applicant who refuses to cooperate would not be allowed to enter the US. While no final decision has been taken on that option, Kelly stressed that “extreme vetting” is a definite course in the future, even if it causes longer-lasting delays for issuance of visas to visitors and immigrants from those nations.

“These are the things we are thinking about,” Secretary Kelly concluded.

“But over there we can ask them for this kind of information and if they truly want to come to America, then they will cooperate. If not, next in line.”

NPR‘s host Rachel Martin confirmed Kelly’s plan to only go through the social media passwords, but to also check the device data of the visa applicants.

DHS Sec John Kelly tells me administration is thinking abt making people who want 2 come to US hand over cell phones & internet passwords.

On January 27, President Trump issued an executive order which suspends for a period of least 90 days the intake of citizens of Iran, Iraq, Libya, Somalia, Sudan, Syria and Yemen into the United States. The executive order states that the travel ban applies to natives of the seven named countries who seek entry into the U.S. as refugees, visa holders or immigrants. The ban however does not apply to government officials or diplomats of the seven named countries.