Most people know the general story behind Google. The company was first established by Larry Page and Sergey Brin. The two met at Stanford University, when Sergey was assigned as a welcoming party to the newly accepted Larry. They became friends, and started a search engine on the Stanford edu network.

At first, the page was a sparse and simple tool. Neither founders knew HTML, and so opted for as easy a layout as possible. From there, they developed it further until it became a major technological release, backed by angel investors who saw the early potential of the project.

The rest is history. Google has become the largest dominating force on the web, reaching now offline into multiple services and areas. They are involved in mobile phones, tablets, television, media entertainment, social media, maps, shopping, fiber optic cable, and even self-driving cars that are slowly becoming a reality. You can’t look at any industry without seeing some kind of impact formed by the internet behemoth.

While they are a controversial company, due mainly to privacy policies and, more recently, one of their acquisitions, they continue to grow today. Love them or hate them, you almost certainly use some kind of feature they provide.

Here are some facts you might not have known about Google.

1. Google “Mows” Their Lawn With Goats

Rather than use lawn mowers, Google has chosen to “mow” their lawn using goats. The animals are regularly hired brought in as a group of two hundred. They get to stand around, chewing the grass until they are sated, grazing all day. Then they go back with their handlers until the next time things around the Mountain View headquarters looks a bit too overgrown.

…The Imaginary Language Spoken By The Swedish Chef From The Muppets

Other interesting language choices include “Elmer Fudd”, “Hacker”, and “Klingon”.

3. Google Has Made an Astonishing 166 Acquisitions

This was by August 26, 2014, and so it might have changed since then. In fact, it almost certainly has by the time you are reading this. The company tends to acquire a new company or more on a weekly basis.

4. The Original Page Didn’t Have The Copyright Info

Back when the Google search engine was first launched, there was nothing but the basic search box and logo. When people were using it, they had no idea when the page was done loading. Often they would stare at the page and wait for it to finish. The founders decided to add the copyright info for the engine at the edge of the page to show that it had loaded fully.

Every year, Google spends approximately $110 million on the I Feel Lucky Button. Keeping it there direct 1% of overall annual traffic. Which means 1% of all traffic isn’t subject to multiple results, or to the ad revenue that come from the queries. Which costs them $110 million every year to maintain the button. Yet, they keep it up, as long as others use it.

“More than” is an understatement. This figure was released back in 2012, and the last two years will have brought many, many, many more searches and URL’s into the picture. Especially since Google remains the most used search engine in the world, with more international success on a wide scale than any other engine.

In fact, 500 million miles of road can be viewed on Street View alone. That doesn’t even count those areas that have road listed, but cannot be seen in detail. They also have more than a million public transit stop schedules, and driving directions for 27.9 million miles of road across the globe.

Remember that awful movie, The Internship? In it, the new staff members to join Google are called Nooglers. Something that many assumed was a bad joke. Nope, they do, in fact, call those who are new to the company Nooglers. The people who are there for awhile graduate to Googler over time.

The hope in 2004 when Google went public with their API was that they would raise $2,718,281,828. Why this figure? It is the mathematic constant of ‘e’, apparently. They didn’t manage to reach that number, however…they made $1.6 billion, instead. Not that they were complaining.

That is 2,400,000 searches per minute, 144 million per hour, and almost 3.5 billion per day. Go up to a year? We start to see trillions, and that is just for their search engine. The activity on all of their services combined is overwhelming.

11. Google’s First Computer Storage Unit Was Made Of LEGO

Being two broke college students, there was a definite limitation to funds that could be used for equipment. So they got creative, building a storage case out of LEGO. Which means the protection of what became one of the most important technological inventions of the last fifty years came down to some plastic kids blocks.

12. The Primary Code Of Conduct For Google Is “Don’t Be Evil” 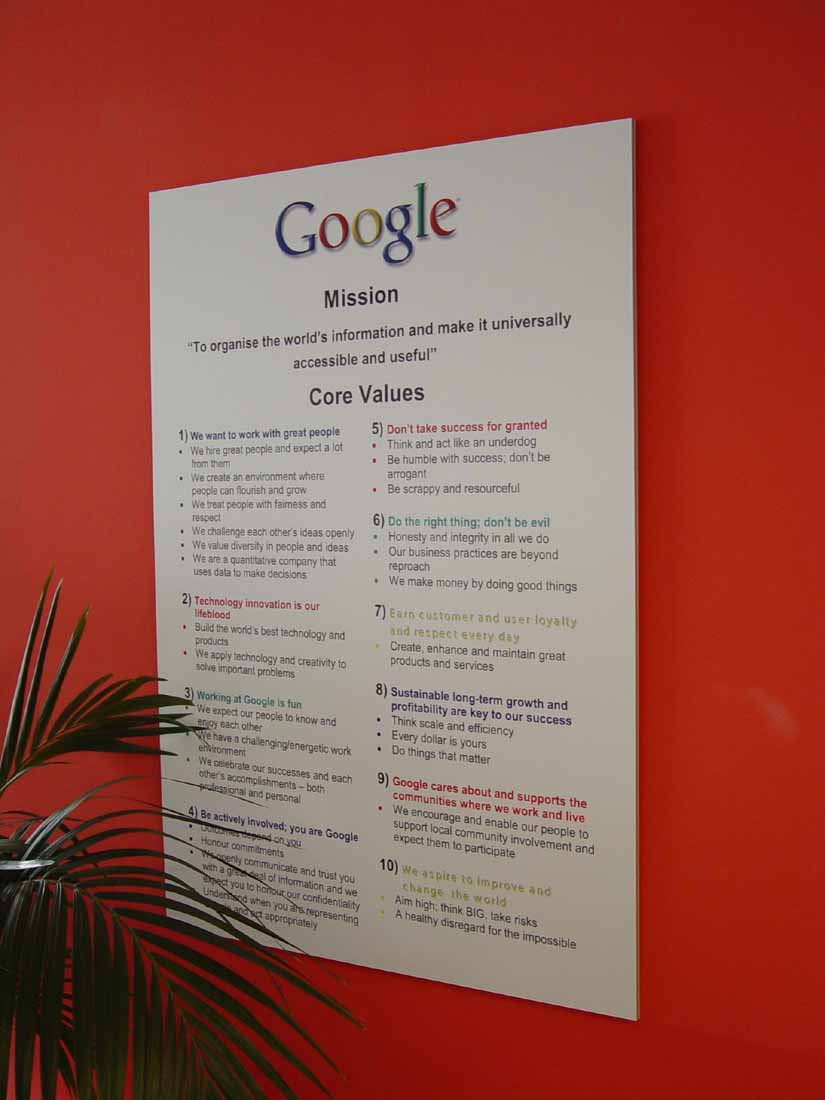 It is right there in the very beginning of their Code of Conduct: Don’t be evil. What does it mean? According to them, making sure that everything done is to the highest ethical standard possible. Also, they let dogs in their office. Not cats though, just because they feel that cats would be stressed by the sheer number of dogs chilling at headquarters. They are probably right.

All employees at Google are given time to work on personal pet projects, as long as there is no direct conflict of interest. Which is very cool.

Know of any other interesting facts about Google? Did you not know any of the ones listed above? Let us know in the comments!