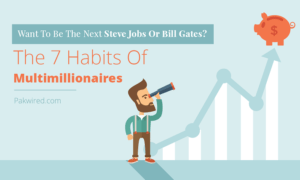 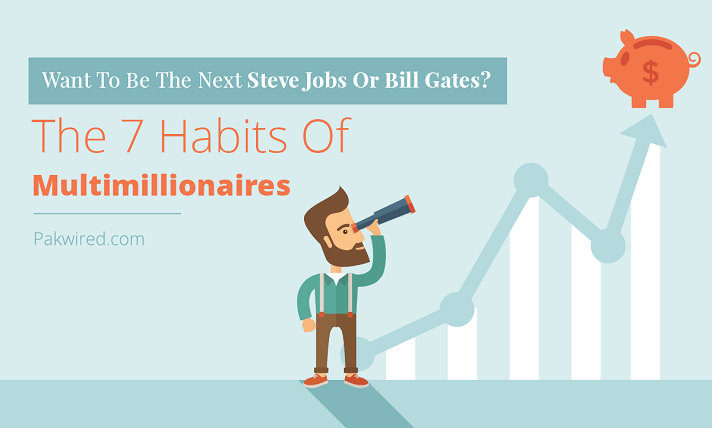 Each and every one of us is driven by success. What that success is will differ from person to person, but we all want to grow and develop; we all want to say we’ve achieved something in our lives.

And looking around us, there’s no shortage of inspiration. From the likes of American technology figures Steve Jobs and Bill Gates through to Pakistan’s own Mian Muhammad Mansha and Tariq Saigol who’ve both made large parts of their fortunes in textiles and energy, it seems more people than ever are finding that perfect route to success.

But is there actually just one perfect route? Is there a formula we can all tap in to to see success?

There may not be a ‘winning formula’ as such, but there’s definitely a number of habits that it seems all successful people follow on the path to becoming multimillionaires:

If there’s one commonality the vast majority of multimillionaires have, it’s they all rise early. They’re all up and working before the majority of the population has even got out of bed.

Steve Jobs woke at 6am. Current Apple CEO Tim Cook reportedly rises over an hour earlier and is sending e-mails by 4.30am. Padmasree Warrior, former CTO of Cisco and Motorola, is said to rise at a similar time, and Tim Armstrong, AOL CEO, gets out of bed at 5am, having told The Guardian “life is too exciting to sleep”.

There are numerous theories as to why the most successful wake early, but the most simplest is it’s a quieter time of day. As most people are still in bed, there are no distractions or interruptions from phone calls, e-mails or even meetings – you have several hours to focus purely on what you need to do.

When you read interviews with millionaires or successful people in general, you’ll often find that although they come across as working continually, there’ll always be a mention of some type of relaxing time; time away from work.

For example, AOL CEO Tim Armstrong spends time early in a morning chatting with one of his daughters. Mark Stevens of MSCO recommends getting two hours of peace every weekend, explaining he “recognized that I could think of new life [and] business directions while I was hiking. Just let my mind flow”.

In essence, it’s not about what you actually do to relax, it’s just about taking the time to take a break fully from work and do something you enjoy; something that takes your mind away from the role and allows you to step back from it all.

One of Steve Jobs’s most famous characteristics was his love of walking, and not just as part of his personal life – using his walks for “exercise, contemplation, problem solving, and even meetings”, he’d regularly ask people to take a walk with him if they wanted to chat, rather than sitting stationary in a meeting room.

Although it may sound a little ‘quirky’, the actual basis of it is fantastic.

Walking clears the mind. When you’re not in an office, it changes your perspective of things. You can take in the fresh air and see – literally – the bigger picture. You aren’t restricted by physical walls or ceilings and as such, you’ll find your creativity levels boom.

It’s a simple trick and one that we can all do, but it’s undoubtedly one of the most important, and one that helped Jobs amass a fortune of $11 billion before his death in 2011.

Possibly one of the most surprising entries on this list for some, it’s fascinating how many of the world’s most successful people meditate on a daily basis.

Rupert Murdoch. Oprah Winfrey. Russell Simmons. Arianna Huffington. Even Clint Eastwood. They’ve all meditated regularly for years, explaining it has a multitude of benefits, from allowing you to truly relax physically, through to clearing and cleansing the mind, making a busy, hectic and often stressful day a lot more manageable.

Interestingly, whilst all forms of meditation can be practiced, it’s often Transcendental Meditation that’s favoured most. Developed in the mid-1950s in India, it gained popularity throughout the 1960s and it’s become a much-loved variation – particularly in North America – owing largely to its numerous benefits and short period required (most only practice it for 15 minutes per day).

According to Thomas Corley, 81% of millionaires create and continually update a to do list. An interesting figure in itself, it becomes even more so when Corley explains only 9% of people on low incomes do.

When you’re on a journey to success, you undoubtedly have a lot going on. You have ideas and thoughts being created in abundance, and as a result, tasks and requirements for each of them that need actioning continually.

In some ways, a to do list may seem a little outdated, but the simple fact is they work – list down everything you need to complete for your goals and you’ll have a clear idea of exactly what needs to happen for you to achieve them.

One of the most interesting findings when looking at multimillionaires is that they live – or for a long time lived – a very frugal lifestyle.

Warren Buffett, for instance, still lives in the same house he did in 1958 and has pledged to give all but 1% of his fortune. Bill Gates has stated the same (in fact, he is said to have convinced Buffett to do so).

Look at Ingvar Kamprad, too. The founder of Ikea, he has a reported fortune of $3.5 billion, yet travels economy when flying for business and either drives his own Volvo around town or gets the local bus.

Although such people may have cash in vast quantities, they don’t feel the need to spend it in an unnecessary way. Whilst there’s no doubt an occasional treat can do you wonders, especially if you’ve worked hard and feel you deserve it, if you’re focused on becoming financially secure, you have to ask yourself – is that product or service really needed and worth the money?

We all know we should exercise. It keeps us fit and healthy and as a result, we will generally live a longer and happier life. And although there are plenty of people who do so regularly, the majority of us consider it a chore; an inconvenience to our daily routine.

For some of the most successful people in the world, however, exercising forms a key part of their day.

Richard Branson once said his number one secret to success was to “work out”, explaining it gave him around four extra hours of productivity each day.

In the early 2000s, Oprah Winfrey was doing cardio six days a week and Bill Clinton was famous throughout his presidency for at least 40 minutes of jogging three times a week.

According to another American President John F Kennedy “Physical fitness is not only one of the most important keys to a healthy body, it is the basis of dynamic and creative intellectual activity.”

To see success, there are a lot of components that need to be considered. A huge number of variables that can impact on your journey. But as with everything, you can do a lot worse than learn from those who’ve gone before you – and these seven habits have, or are still, all part of numerous multimillionaires’ daily lives.