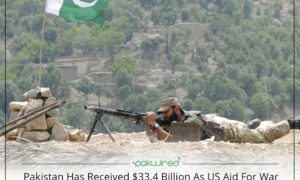 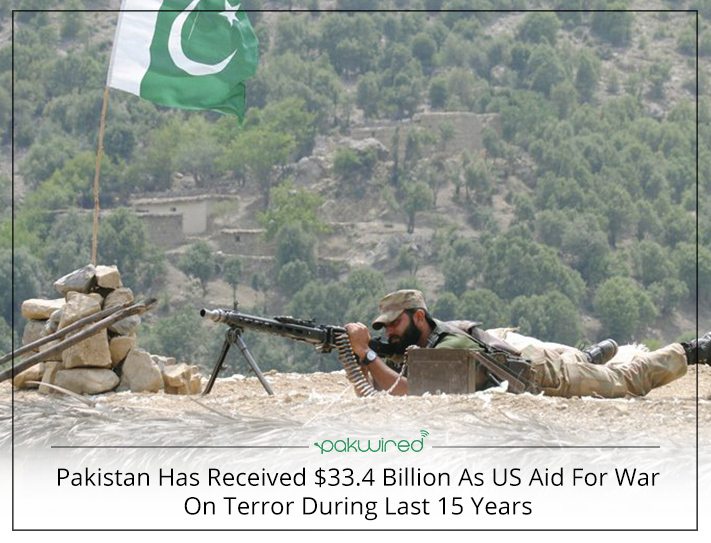 The much talked about US aid to Pakistan for the war on terror has summed up to $33.4 billion during the last 15 years. Much of the payment (44 percent) was dispersed for the support services provided to Washington to carry out their operations in Afghanistan. A large chunk of population in Pakistan believes that these numbers do not provide enough levy to the US government to manipulate Pakistan and force it to dance to its tune.

As per the numbers provided by the Department of State and other development agencies, $14.57 billion has been accounted for the logistics and aerial support out of the total aid. Whereas, only $18.8 billion was given to Pakistan for civilian and security related aid, during 2002-2016.

Realistically speaking, Pakistan has actually lost more than what it has gained in terms of foreign aid of $18.8 billion.

The total losses Pakistan has suffered in this war on terror since 9/11 account for $123.13 billion, according to Ministry of Finance.

The flow of funds from US to Pakistan has diminished significantly during the last few years specially post 2014. Islamabad has received $1.6 billion annually in 2014, versus an average figure of $2.3 billion during 2002-2013.

These numbers include the funds received under Coalition Support Fund (CSF) which have been used to support Afghan anti-terror operation. Thus, US aid to Pakistan during 2014-16 hovered around only $810 million versus an average of $1.4 billion during 2002-2013. Pakistan now has very little dependence on US as this aid amounts to only 1 percent of our federal budget which can be arranged from internal sources.

Breaking down the numbers, since 2002 US has given almost $7.96 billion to Pakistan in the name of security assistance. Out of which, a sizable amount of $3.8 billion has been allocated for Foreign Military Financing Programme. Additionally, another $2.35 billion is allocated for Pakistan Counterinsurgency Fund and Counterinsurgency Capability Fund.

Pakistan has also received a significant sum of $10.85 billion under the head of economic assistance from US. During the last 15 years, per year average turns out to be $723.5 million. Out of this sum, almost $8.5 billion was allocated for Economic Support Fund, another $918 million was given for International Disaster Assistance Programme and the remaining $623 million in the form of food assistance.

But the disbursements for economic assistance have declined sharply during last 3 years dropping to $1.4 billion. The finance ministry did not include this aid into the budget which raises a question about the integrity of Pakistani government authorities which handle these funds.

Neither US nor Pakistan have received any benefit out of this anti-terror operation in Afghanistan. According to a report published by USAID, US could not achieve its long term development plans in Pakistan as some short term political tug of wars defeated the whole purpose.

Despite the fact that US has reduced the quantum of aid given to Pakistan during the last few years, Pakistan still needs US support to deal with UN donors agencies. Since we do rely on International Monetary Fund (IMF) and World Bank to secure loans, thus US support will ensure that the terms are less stringent.

According to Dr Ashfaque Hasan Khan, a former economic adviser to the finance ministry:

“Pakistan’s economic relations with the US has been on the decline for the past 15 years, as its share in exports, remittances and foreign direct investment have drastically reduced”.