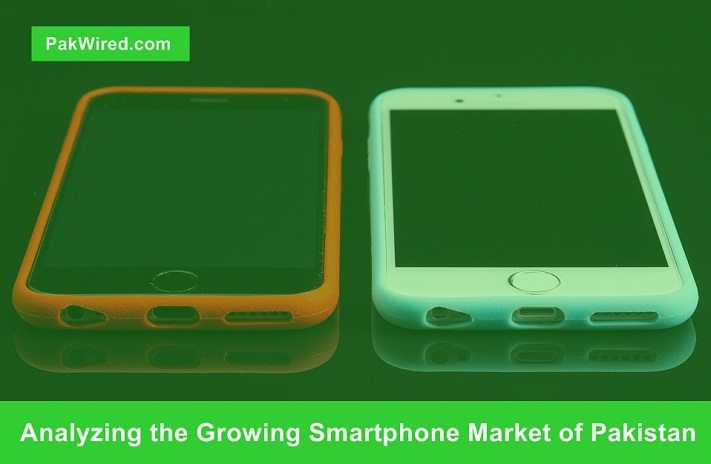 Smartphones make us feel connected to the world. Today in urban Pakistan we see people from all walks of life and all social strata holding a smartphone in their hands.

These gadgets are used to connect to friends and family from all over the world. You could talk to your brother in London or message your colleague in the cubicle next to you to ask where they will be after work.

Not just social connections, some people also use these devices to watch TV shows online.

Upgrade to the future

The upgrade to smartphones revolution in Pakistan is being driven in major part by the age group 18-34.

This shift to upgrade has skyrocketed after the launch of broadband 3G & 4G services over mobile networks.

“1 million people per month are becoming high-speed internet users since 3G and 4G services were launched in the country”.

This growth of mobile broadband has created a huge demand for smartphones and also laid the base to create various opportunities for the country. The availability of these services can now lead to further technology integration in the education, healthcare and other sectors and also create employment opportunities.

Today in Karachi, every locality has 4 – 5 mobile shops. Instead of visiting large mobile malls or the Sadder market as was the trend 5 years ago, Karachiites are now turning to these community shops to buy their mobile phones.

The same can also be said for Lahore; the mobile markets limited to Hafeez Center and Hall Road can now be seen all over the city. This rapid increase of shops in Lahore is due to increased demand also from adjacent cities.

What is the Size of the Pakistani Mobile Phone Market?

Although one cannot give an exact number to this question, if we base our estimate on the country’s mobile phone imports through legal channels we get a pretty good idea. According to independent market research, the size of the Pakistani mobile phone market was $840 million a year as of September-2015; during which time 1.53 million mobile phone units had been imported. The size is estimated considering the average price of a phone to be $45. According to another estimate, by the end of 2016 Pakistan will be home to 40 million smartphones.

However, the current estimate of imports does not take into consideration phones that are brought into the country via the grey channel and non-residents who bring phones for their friends and family. According to Mr. Parvez Iftikhar, an expert on Information and Communications Technology, mobile phones that come into the country via informal channels are worth around $1 billion. 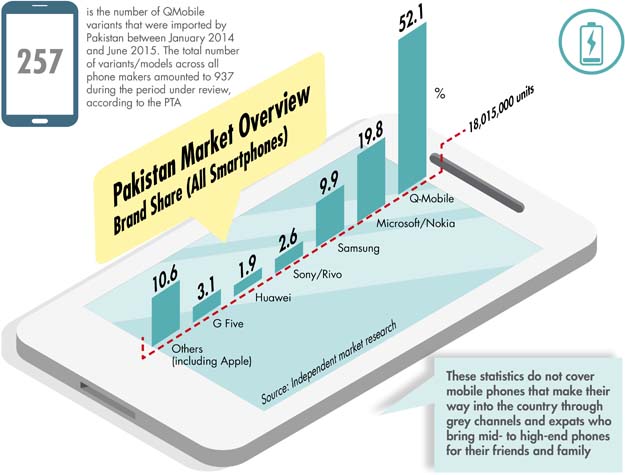 Samsung increased its market share from 6.6% or 111,000 units to 11.3% or 173,000 between September 2014 and September 2015. And in the next official numbers, it is expected that Nokia will be overtaken by Samsung in the second position. Currently Samsung imports 300,000 units a month and accounts for more than 80% of the high-end market segment.

Categorizing brand leaders according to price is a better way of depicting the dominance of a brand.

If we look at this breakup for the 3rd quarter of 2015, we will see that Samsung is the dominating brand in the mid-to-top tier segment. Samsung is followed by Huawei in this category and Apple also has a fair share of the segment’s pie.

Decreasing price gives a stiffer competition to these international brands. Qmobile comes into the scene as prices get lower and dominates most price bands below $100.

The $100-$150 price band has Qmobile and Samsung in neck-to-neck competition whereas in the $30 – $75 price range, the race is between Nokia and Qmobile.

According to Mr. Iftikhar “Going forward, I see a phenomenal growth in smartphone penetration, just like black and white movies were replaced with colour films…” He added that 2015 was good for telecom growth, which is similar to global trends. But this growth could be faster if the government removes or lowers entry barriers such as import duties and taxes.

“The government is aware that cellular mobile operators will not invest in network expansion to remote areas nor buy bid for more spectrum unless their concerns regarding taxes are addressed” said Mr. Iftikhar.