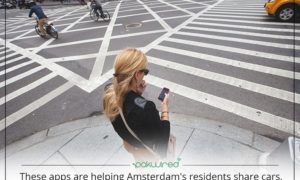 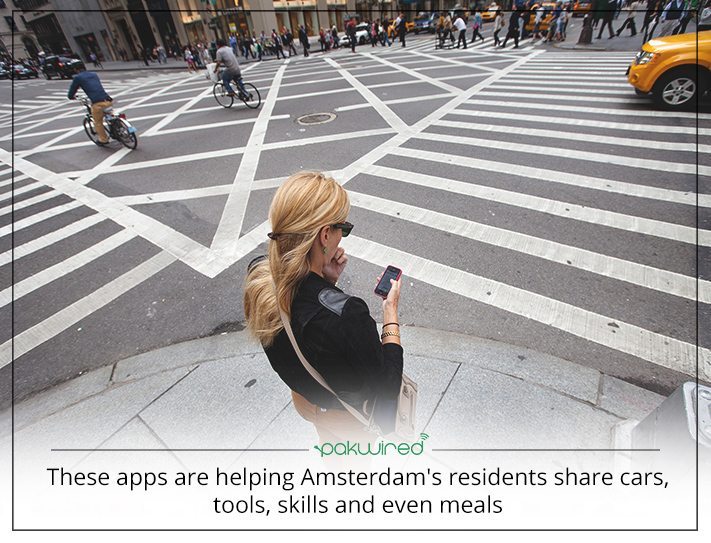 Amsterdam has created dozens of new digital platforms encouraging citizens to participate in the sharing economy.

An app called ParkFlyRent leases out cars parked by holidaymakers at Schiphol airport. Instead of the cars sitting idle for weeks, they are rented out and a portion of the income is handed to the owners. An app called Djeepo finds private storage spaces (basements, attic and spare rooms) for those needing extra room for their belongings.

Konnektid allows users to share skills like guitar playing or foreign languages. We Helpen gives details of voluntary work available in the city’s neighbourhoods. An app called Camptoo allows people to rent privately owned motorhomes, which are usually only used 4-5 times a year. Abel connects drivers with passengers who are going in the same direction.

‘We wanted to truly make living in the city a shared experience,’ explained Harmen van Sprang, one of the organisers of Amsterdam’s sharing economy initiative. ‘We want people to feel like they have a connection not just with the city, but to each other as well.’

The apps lift citizens into the sharing economy and remind them that sustainability is an in-built motive. As part of a concerted effort to reduce waste and remove one percent of all cars from roads in Europe, an app called SnappCar allows users to rent out their vehicles, monetising transport which sits unused 90% of the time. Another app called MyWheels allows users to rent a car from somewhere immediately in their neighbourhood.

The sharing extends to other services like food and drink. Over a lunch of carrot soup, bread and cheese at her home in the neighbourhood of Jordaan, an amateur cook called Caro van der Meulen describes a platform called AirDnD (Drink and Dine) which offers food in private homes prepared by around 2,000 amateur chefs. Diners can pop into a private kitchen to eat home-cooked food.

‘I enjoy cooking and I enjoy meeting people” said Meulen. ‘I think for people for whom cooking is a hobby, or who don’t want to take the risk of running a restaurant, this is a unique solution. The people who come to eat are regulars and curious people who have heard about AirDnD. I think it helps with the community experience.’

Amsterdam’s sharing economy initiative is a move away from traditional monetised platforms like Airbnb and Uber. An app called Home Exchange, for instance, asks users to upload pictures and descriptions of their homes. Users can then swap homes for short breaks or longer holidays. The direct swap encourages a level of trust which doesn’t exist on platforms like Airbnb.

From the public sector’s point of view, sharing and collaboration are valuable tools in the drive towards achieving a sustainable and friendly city. ‘We are trying to increase social capital, and sharing is a good thing,’ says Nanette Schippers, program manager, sharing economy for innovation office, at the government of Amsterdam.

She continued: ‘Everything indicates that people continue sharing because of a whole bunch of other reasons such as a sustainable society. Now, we know who is willing to share – those between the ages of 20 and 45 are more likely to share. But our role is to expand this group to include low income groups and the elderly. We want a pro-active, open attitude which understands the sharing initiative and helps everyone.’

The initiative began in 2015 when Amsterdam was made the first European Sharing City. The push to promote new platforms associated with sharing has been a priority for the city’s government since. A large part of this work has been done by the government of Amsterdam and a social enterprise called SharedNL, which advises start-ups on how to encourage collaboration between the public sector, companies and local citizens.

ShareNL was founded in 2013 and conducts research into new trends while acting as a convener for over 60 public and private partners who want a piece of the sharing economy. ShareNL also convenes round-table discussions with partners every three months, and organises free meet-ups for entrepreneurs. ShareNL recently launched the Sharing City Alliance, which promotes ideas from other like-minded cities like Barcelona, Tel Aviv, Hamburg and Toronto.

Amsterdam first noticed the potential in a sharing economy in 2013 when a survey of 1,300 adults revealed over 84% of Amsterdam’s respondents were willing to take part in at least one type of collaborative consumption. ‘Everything points to the fact that sharing economy will only increase,’ said Harmen van Sprang, who is one of the company’s founders. ‘Two thirds of consumers are already using sharing economy platforms. This shows they want to collaborate.’

His co-founder Pieter van de Glind agreed: ‘We think that by 2020, a large portion of people will have tried sharing in some way. In 2013, ten percent of locals in Amsterdam said they would share something with a stranger. That number went up to 32% last year.’

Worth billions of dollars

The poster child of the Dutch sharing economy is Peerby, launched in 2012, which allows users to borrow household items from their neighbours. Most of the items are available for free and a small amount are available to rent with Peerby taking a share of the income. Items vary from pressure cookers to recreational holiday vehicles, power drills and even toys for children. Last year, Peerby – whose inventory of products is valued at around $1 billion – raised $2.2 million from 1,051 crowdfunders on the Dutch sustainable-crowdfunding platform OnePlanetCrowd. Peerby has expanded its services to 20 cities in Europe and the United States.

‘Some of the products, like drills for example, are unused for months at a time. We think communities are stronger when people share with each other,’ said founder Daan Weddeppohl, sitting in his rooftop conference room. The idea for Peerby came to him in 2009 when he lost his home to a fire, and subsequently lost his job. ‘One of the challenges is to persuade traditional bricks-and-mortar businesses to participate in what they see as a new model. There are lessons for everyone. We are seeing a generation evolve who would much rather share both services and skills.’

“We are seeing a generation who would rather share”

That evening, as two service staff buzzed around her, Judith Manshanden, the owner of GEEF Cafe, talked about how she resigned from her job at Boer & Croon Management Consulting to open a pay-as-you-go restaurant in Amsterdam. GEEF began as a pop-up restaurant in Rotterdam in 2013 and has had several temporary locations until reopening as GEEF Café Amsterdam in April 2016.

The restaurant uses only food which is about to be thrown away for its menu. Diners are informally told of a cost price, and pay accordingly. A portion of the income is used to feed the less fortunate. And in an exercise in community cohesion, guests can also volunteer their time at the restaurant in exchange for food.

Over dinner, Manshanden described the day-to-day management of the business side of GEEF – ‘I can’t even cook at home!’ She left her corporate job because she was unfulfilled and looking for a more interesting challenge. ‘I wanted to find something that made me feel happier. I thought there had to be more to a career than just ambition and earnings.’ She laughed: ‘No-one ever says running a restaurant is easy, and GEEF is no different. But the community aspect of it is very fulfilling.’