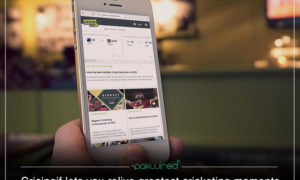 Cricket enthusiasts who dig through internet to find that one moment to relive, won’t have to go through this ordeal now. A new Pakistani startup has come up with an app where users can stream a GIF of the latest cricket match highlights even on a very ordinary mobile phone via Cricingif. These moments include every important ball, every victorious highlight, every wicket taken, and all the scoops of the cricking world which happened on the green grass! Practically the fans are getting a chance to cheer on everything which interests them about this sport.

Shahid Rasool, former CTO of Offroad Studios, founded Cricingif in early 2014. He brought on board as cofounder Qasim Zafar, who got his preliminary success for initiating the first ride sharing app of Pakistan, Savaree, which was later acquired by Careem.

The Philosophy Behind The Startup

The founders of Cricingif got inspired from the idea that viewers have the right to watch the moments on their own terms. The dilemma was that once they missed an important moment it was almost impossible to find it again. They would get lucky if someone shares the highlight someday. There is also commentary available of every delivery but in the text format which doesn’t inspire every type of viewer. Therefore, the idea came to start something novel in this field.

Now this on-demand, engaging content philosophy is being taken a step forward and is being expanded to the entire cricket coverage, and not only live matches. It should be considered as Cricket’s Buzzfeed as compared to Cricinfo which works on the pattern of the New York Times. They have raised initial investment and the product has been relaunched with a much broader scope.

The Revenue Model at Cricingif

The revenue model is simple as they intend to make money from online advertisements and sponsors. They are also working on the idea of placing ads inside the ball-by-ball video clips. Their financial target is to capture at least 5 percent of the $2.5 billion estimated market.

The market is currently being bifurcated into three tiers. Tier 3 could be targeted with low marketing spends but it needs a very good understanding of the market. Tier 2 needs a lot of cash to capitalize on it and Tier 1 has intense competition since it covers hot territories of cricket. They plan to take reverse gear from Tier 3 than to 2 and, eventually, tier 1.

The overall strategy is aggressive in nature and inculcates strategic partnerships to expand the user base. Their aim is to include those features which enable the content to become viral and widely shared.

The growth trajectory of Cricingif is also impressive. It is expanding at a rate of 15% on a monthly basis for the past six months without spending on its advertising. This growth trajectory is based on most important metrics. Consequently, it can be derived that these growth numbers could be improved with some product enhancements, better branding and marketing efforts.

It is pertinent to mention that they had to take the site down due to licensing issues for 4 months last year since ICC and BCCI served them legal notices. However, they relaunched towards late 2016 and currently Cricingif ir operative with proper licensing and investment.

Prior to investment, the founders put $35,000 from their pockets, along with the proceeds from their technology consulting business, into team and technology development for Cricingif. Their first round, which values them at $4 million, is primarily geared towards helping them expand as rapidly as possible in the Pakistani market and begin exploring other territories.

Currently the owners are looking out to establish partnerships with major brands and large organizations which can promote Cricingif brand. This will enable them to boost up the user base. For this purpose they are also in contact with renowned Pakistani sportsmen.

The biggest catch is to make things viral so they plan to add engaging features into the content to ensure maximum sharing. In addition, online advertisement push is also on the cards. They expect their future team including investors and employees to bring connections and relevant experience from the advertisement field. As a result, it will help raise their brand awareness. Nonetheless, preference will be given to investors with prior experience in the digital and broadcasting field that will help them grow steadily in a short time span.