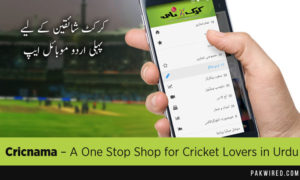 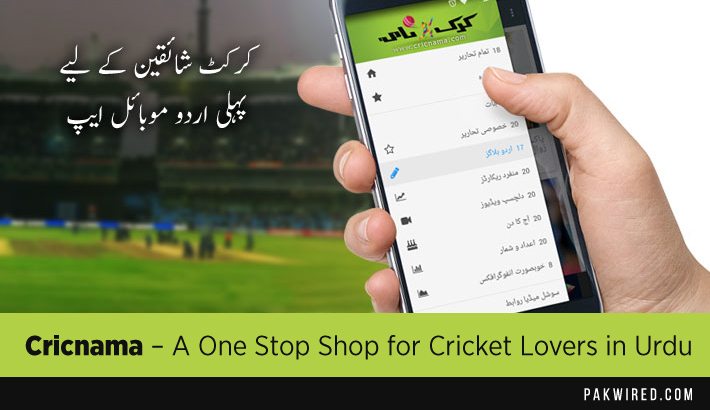 Cricnama.com is a famous Urdu language website that is all about Cricket. The latest news and happenings in the cricket world are the USP of the website, especially what’s going on in Pakistani Cricket.

Keeping up with the times, cricnama.com has now come up with an app for its users. They have launched an Android app in Urdu. The app will bring all the latest cricket coverage to the palm of its users.

The launch of the Pakistan Super League followed by the Asia Cup and then the T20 world cup and the general uptick in cricket consumption has gotten the country in a constant cricket frenzy. This has resulted in quite a few apps being launched, notable among these: PSL Fantasy League and Wasim Akram’s Cricket News app.

This is also the right time for an app like the one Cricnama has launched; a one stop shop for all your cricket news in URDU.

The Cricnama app is at the moment in an alpha testing phase and, as mentioned, will operate on Android powered smartphones and tablets. It should however be noted that an iOS app for Apple’s platform and a Windows mobile app will also be launched soon.

The USP of this app and cricnama.com is that it is not just a cricket news site but it provides all its news in Urdu, our national language, which is what most of the country speaks and read better than English.

Even after the roll out of 3G and 4G networks and easy accessibility and acceptance of smartphones in Pakistan, what lacks is good quality sites and content for the masses in Urdu. Although cricnama’s app does not cater to all news, at least from here on in the realm of cricket we will not have a dearth of content in Urdu.

Cricnama will be the first app of its kind coming out of Pakistan in Urdu and will cater to the growing information needs of users in Urdu. Features of the app include: news, analyses, debates, reports, records, videos, photos, statistics and infographics on cricket.

Mr. Fahad Kehar, founder and editor of Cicnama, said this when introducing the website and app “Pakistan is a richly multicultural and multilingual country. Language, accent, culture, tradition, lifestyle, dress, food — everything changes every hundred kilometres.”

Mr. Fahad Kehar added that “Two things that stay the same throughout the country are Urdu, which is spoken and understood in every nook and cranny, and cricket, loved by everyone no matter what their age, class, caste or color is. What CricNama does is it blends the two values together”.

Cricnama is leading the way for Urdu content for consumption of the masses and we are sure that it will pave the way for more such apps in various other industries as well.