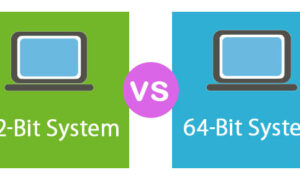 We can count in many ways but in computing terms, there’s only the binary option: 0s and 1s. Either of them is considered a ‘bit’ i.e. for 1-bit computing, you’ll get two possible values; four values for 2-bit, eight for 3-bits, and so on (2 cubed).

These numbers just show how powerful higher-bit computing chips can be. They aren’t just doubles.

Every few years, chips inside computers/smartphones and the software running on them make strides in supporting a new number. Example:

It’s quite obvious: 64-bit or x64 is capable more performing better than 32-bit of x86, a term that originally referred to an Operating System (OS) with instructions set to work on Intel 8086 through Intel 80486.

How can you tell which version you have?

If you are using Windows on a computer which is less than 10 years old, your chip is most likely 64-bit but you could have installed a 32-bit version of the OS. It’s easy to check.

In Windows 10, go to Settings > System > About or type About in the Windows 10 search box. Under Device specifications, type: “64-bit operating system, x64-based processor“. If you do, it means you’re covered.

Mac users don’t have to worry, MacOS has been 64-bit since a long time. The latest version (10.14 Catalina) 32-bit apps on Mac aren’t technically supported.

The big reason might be you have a 32-bit processor which naturally requires a 32-bit OS.

To have such a CPU today is unlikely. Intel began manufacturing 32-bit processors in the 80836 range back in 1985; it sold 64-bit processors by 2001. If you purchased a PC when the Pentium D chip was released in 2005, it’s unlikely that you only had a 32-bit instruction inside.

Most likely, you have an old system with an OS which only came as 32-bit. Any upgrades might not have bumped up your installation to 64-bit. Not all of the early 64-bit processors had all features combined. You can use software like 64bit Checker to find out if your PC is fully ready for the whole processing power. It works on all versions of Windows including Windows 95.

Installing a 32-bit OS on a 64-bit architecture can work but it isn’t recommended. It has more limitations, can only truly use 4GB of RAM. Increasing the RAM on a 32-bit OS doesn’t improve the overall performance. However, if you upgrade that system with excess RAM to 64-bit OS, you’ll see the difference.

The theoretical limit of RAM at 64-bits is 16 exabytes equal to 1 million TB or 1 billion GB. We’re far away from having the hardware to support it.

64-bit computers have many other improvements such as wider data paths, large integer sizes and eight-octet memory addresses. Computer scientists can take adequate advantage of these features.

You may have noticed some downloadable programmes giving you the option to choose between 32-bit and 64-bit variants. Firefox is one such example as well as Linux.

32-bit OSes are still out there for people still using them. A 64-bit OS can support 32-bit programmes – Windows has an emulation sub-system for that called Windows32 on Windows64, or WoW64.

You’re least likely to find support for 32-bits on Mac. Apple is trying to end support for 32-bit apps under Catalina. On the Apple menu, select About this Mac and choose System Report; highlight all apps listed under Software, each one will have a “64-bit (Intel)” entry reading Yes or No (most will be Yes). If you have an important programme which says No, avoid Catalina for now.

Apple’s A7 chip was the first 64-bit processor to be integrated into a mobile phone (iPhone 5S). In 2015, Apple ensured all iOS software went 64-bits. As of June 2016, opening any 32-bit app in the latest versions of iOS prompted a “not optimized” warning: “using it may affect overall system performance“.

If you have iPhone 5S or higher with iOS 10 or above, you can’t use older 32-bit apps. Yes, Apple can force that to happen.

It can be trickier to uncover details on Android phones unless you’re familiar with the chip inside. You’re on 32-bits if you’re still using OSes below Android 5.0 Lollipop. The AnTuTu Benchmark app can help you identify; load it, click the Info button and search for the Android line which will inform you about the version on your phone and whether its 32- or 64-bits.

Shifting to x64 doesn’t guarantee better performance; it has other benefits such as fetching larger data streams per cycle (and quicker), improved encryption and power efficiency.

The 64-bit revolution is already here. You don’t to know anything about x64 to be a part of it.