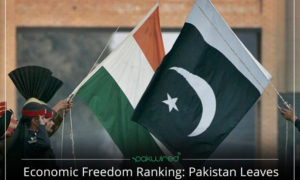 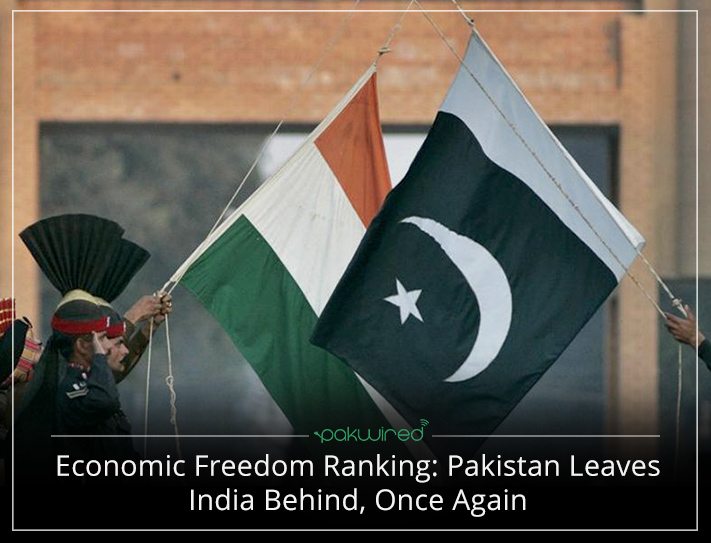 Not too long ago, Pakistan left two countries, China and India, behind in terms of equity market performance. In a latest development, Pakistan has once again surpassed India in yet another economic indicator i.e. Economic Freedom Ranking.

As per the recent Index of Economic Freedom Ranking 2017, Pakistan is positioned at 141st position while India, with its shinning India slogan, is placed two places lower at 143rd. Heritage Foundation is the official publisher of the report.

It is relevant to mention that both India and Pakistan are ranked too close to the bottom. However, Pakistan has been consistently keeping ahead of India in the recent few years due to improved security situation and ample amount of foreign investment.

Also Read: Bloomberg calls Pakistan to be a steady economy

In terms of business development and government spending, Pakistan has stepped ahead of India. Subsequently, faring reasonably well against the arch-rivals, their performance in the financial market has also flourished.

What does Economic Freedom Ranking indicate and how was it Measured?

The ranking indicates quite a few parameters about a specific economy including economic stability, freedom of economic activities in the country and the willingness of foreign investors to invest. The report is measured after taking into consideration the following indicators:

Quick Read: Anusha Rehman steps up to introduce the world to a digital Pakistan

Do these Rankings really matter?

To be fair, it does, especially to equity market investors. The improvement in the Economic Freedom Ranking is an indication that the country is progressing towards higher economic growth rates and higher equity market. Pakistan’s position ahead of India is a powerful depiction of the aforementioned statement.

One of the quotes from the Pakistan profile read:

“Pakistan has pursued reforms to improve its entrepreneurial environment and facilitate private-sector development. The financial sector has undergone modernization and restructuring”

On the other hand, Indian profile read:

“The state maintains an extensive presence in many areas through public sector enterprises. A restrictive and burdensome regulatory environment discourages the entrepreneurship that could provide broader private-sector growth”