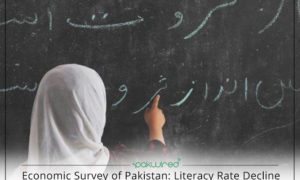 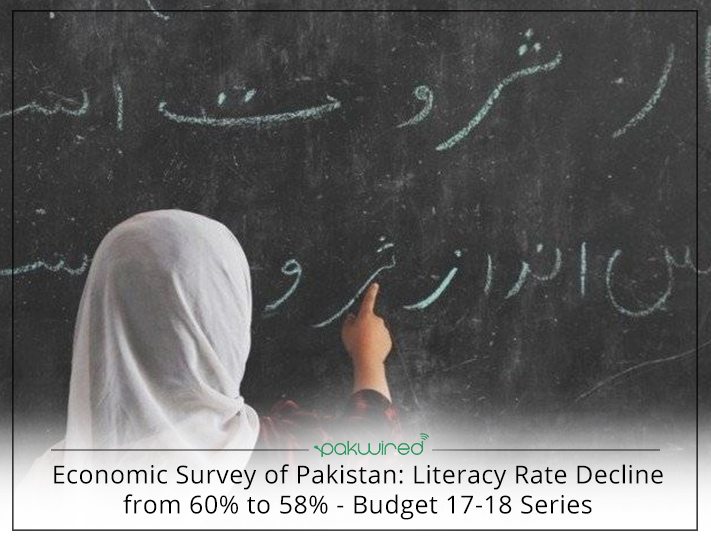 The Economic Survey of Pakistan (2016-17) released on Thursday has revealed decline in literacy rate from 60 to 58 percent.

The Net Enrollment Rate (NER) at primary level has also seen a dip from 57 to 54 percent nationwide. NER statistics indicate that all provinces except Sindh have seen a decline with Balochistan dropping to a low of 33 percent.

Also Read: Public Healthcare Facilities In KP: Govt. Putting The Money Where The Mouth Is

The PMLN Government, despite criticism from opposition parties, has mostly remained bullish on the country’s outlook. The infrastructure progress under ‘One belt, One road’ initiative has been marketed as a new dawn for the education sector as well – with more opportunities available at a higher level to open doors for enrollment at primary level.

Currently Pakistan spends 2.3 percent of GDP in education sector – a number that remains significantly lower than all other countries within the region let alone on a global level. The increase from 2.2 to 2.3 (2015 vs. 2016) has been a major talking point in budget 2016-17. The government defended its stance pointing towards a gradual increase since 2012. The opposition however maintains that with the limited expenditure on the sector, the primary government schools suffer the most.