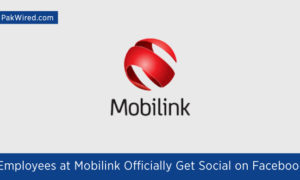 Well, now things are changing. We now have an enterprise version of the popular social media site called ‘Facebook at Work’ and though it’s not mainstream yet, one major company that has jumped on to the enterprise version is none other than telco leader Mobilink.

A few months ago in an interview Mr. Amir Ibrahim, Deputy CEO of Mobilink, mentioned that digitization of the company was the new direction and he was making sure it happened.

Now Mobilink has formally stated that they will use Facebook at Work for their employees all across the country.

Create your own network

It is the first instance where a telco has adopted a private network of this sort. For now it has bettered communication among employees at Mobilink and communication over the network has decreased outbound email traffic.

Facebook at Work has similar features as the main site such as:

However, the enterprise version is designed to share content and collaborating with co-workers. The aim is to create a connected and productive workplace.

The security aspect has also been addressed. One would think that it would not be up to the mark but the enterprise Facebook claims to have enterprise level security as well.

According to Jeffrey Hedberg, President and CEO – Mobilink, “As we move towards digitalization, Facebook at Work will serve as a platform which will not only connect our employees better but will also serve as an informal platform for information sharing. I am confident that the use of Facebook at Work will enhance our ability to communicate more efficiently and help develop a better integrated Mobilink family,”

The good thing is that most Mobilink employees already use Facebook and did not have any issues when they began using Facebook at Work and thus roll out of the enterprise version proved to be a very easy process throughout the organization.

Although it won’t actually be like connecting to your friends on Facebook, in our opinion it won’t really be that bad either to use Facebook for collaboration at work.