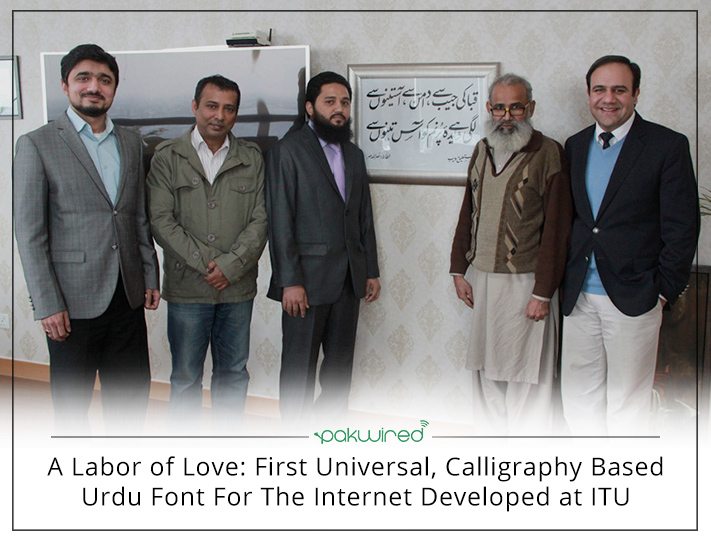 One of the most widely spoken languages in the world, Urdu is the national language of Pakistan with an Indo-Aryan origin and written in the Perso-Arabic script. Written and read from right to left Urdu provides no distinction between upper- and lower-case letters, though shapes of letters may vary depending on their position in a word. Many of the letters share a common base form, however they differ by pronunciation symbols placed either above or below them.

Calligraphy, from the Greek words kallos (beauty) and graphos (writing), refers to the harmonious proportion of both letters within a word and words on a printed page or webpage. While the calligraphic writing may appear to some as an effortless form of art, each letter and diacritical mark is the result of painstaking measurements and multiple strokes.

Nasrullah Mehr is a well-known Pakistani calligrapher. He is a recipient of the Yousaf Sadidi Award — honored by the Governor of Punjab in 1998. For almost three decades he has been involved in Urdu calligraphy and has worked for numerous magazines and newspapers.

Just as the Internet has affected all aspects of our life, tit affected Nasrullah’s business as well. His business growth and the appreciation of the manual art form he created, considerably slowed down as the internet penetration continued to deepen.

It was his son, Zeeshan Mehr, who came up a digital solution: instead of following classical practices, he suggested creating a more refined version of Urdu font for the internet. He started off with learning computer programming and teaching himself everything he needed to know to create stunning Urdu font with ease. In all, it took them approximately 10 years to build the font.

However, they lacked the exposure and reach to bring their font to the mainstream market.  Furthermore, a lack of finances and resources also hindered the progress.

Fortunately, things turned out for the best before it was too late. With the support of Dr. Umar Saif, Vice Chancellor of Information Technology University (ITU) and under the supervision of ITU’s technology expert, Dr. Agha Ali Raza, Zeeshan and his team developed a new Urdu font with enhanced compatibility to the intricate Nastaliq style, which is widely used by calligraphers.

The Mehr-e-Nastaliq Web Font looks beautifully hand-crafted compared to the old computer Urdu fonts, with a very minute footprint so that it can be easily rendered by the web browser.