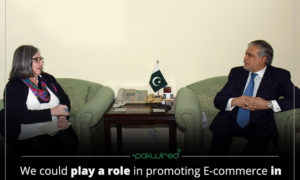 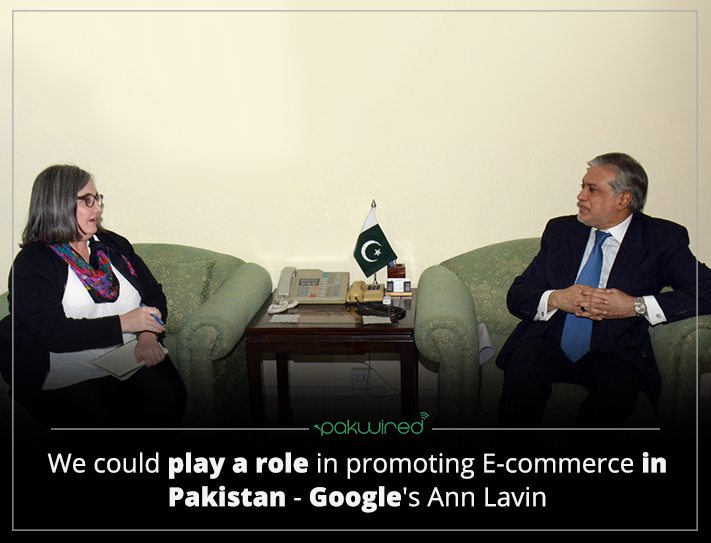 Lavin acknowledged the economic turnaround the country has achieved since the “financial downturn” of 2008. Moreover, she said Google could play a key role in transforming e-commerce and Information technology operations across the country.

“Google could play a role in promoting e-commerce in Pakistan.” – Ann Lavin

She said her company could play a role in IT development, promotion of e-commerce and assist in attracting investment in Pakistan.

Pakistan’s economy continues to maintain its growth momentum for the 3rd year in a row with real GDP growing at 4.71% in FY 2016 – the highest in 8 years. Moreover, the industrial sector during FY 2016 recorded a remarkable growth of 6.8 % against the expected 6.4 % and is all time high in 8 years.

Despite the economic growth that happened over the past few years, the country is still lagging behind its peers when it comes to technology integration, telecommunications infrastructure, and e-commerce.

E-Commerce is at its early stages of development in Pakistan. As the number of Internet users swells, with young consumers accounting for more than over 60% of web users, the trend is expected to continue and is likely to become the dominant practices as time goes on.

While mentioning the possible role of her company in promotion of digital economic growth in the country, Google’s Regional Director stressed that Google could prepare the ground for attracting foreign investment in Pakistan.

The Finance Minster requested the Google director to present a practical proposal for implementation of these recommendations so it could be considered by concerned authorities and stakeholders. The government is committed to providing a favorable environment to all prospective national and international investors to thrive, Mr. Dar added.

“Pakistan has been projected by renowned international institutions as the second best place for investment in the world,”

“The turnaround of Pakistan’s economy, macroeconomic stability, improvement of energy and law and order situation in the country has provided a favorable environment for strong business activity and foreign direct investment, however, many newcomers have already shown willingness to invest in Pakistan’s IT sector.”