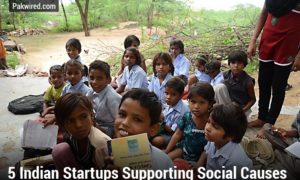 Startups are brilliant ventures that are initiated by smart minds – some who aim at solving the need of the hour to cash in on it and some who primarily do it to help a social cause. Yes, there are some startups who aren’t just running after big money – because they are focusing on actually making a difference to the world around them.

Here are 5 Indian startups supporting social causes and what you can learn from them:

Milaap is now India’s largest funding platform for social and personal causes of people across the country. It allows you to raise money, lend some or donate to a cause you truly believe in. Empowering people to be the change they want to see, this venture was started by three young entrepreneurs back in June 2010, with a single vision: “To change people’s concept of giving and make it a personal, transparent, and sustainable process.”

What you can learn from Milaap

Triggering emotions by bringing forward genuine causes from the country is the best way to nudge people to take action and participate in your venture. Sometimes, it is all about doing good for others to be able to do good for yourself.

Teach For India started back in 2009 and is today called a nationwide movement of outstanding college graduates and professionals, who commit to work towards eliminating India’s educational inequity. Started as a project of Teach to Lead, they are now spread across 7 cities with 910 teachers, and aim at reaching the 8th city very soon with 2000 teachers in tow. Running on one motto: “Every child deserves excellent education”, this is one venture to take inspiration from!

What you can learn from Teach For India

A lot of startups are only growth oriented and keep their target audience limited to a few cities. If you’re standing for a social cause, then take it further. Encourage people from other locations to become a part of your venture in their own way to help you grow as well as make a difference in that sector. Crowdsourcing help is not a bad idea when you know exactly what your goal is.

A BigData software company with its roots in India and Singapore, Corporate360 isn’t just offering a SaaS based marketing data cloud software to B2B marketers. They are actually enhancing their product’s value by backing it up with a venture called SmartWorker. The company recruits the unemployed youth of Kerala, trains them to become data analysts and gives them an opportunity to join the company. Starting with only 5 such employees back in 2013, now the company has 25 employees and is creating their own IT Park to give them the exposure, and experience of working in the industry.

What you can learn from Corporate360

Picking and aligning yourself with a social cause is easy, but it takes a different level of will to be the person behind the difference you make in the society. If your startup identifies a loophole in the society and has the bandwidth help people out – be it in terms of jobs, finances, education, etc, don’t hold back. And once people know of your efforts, the numbers that associate themselves with your products and services will automatically increase.

Oust is a mobile app that uses the mobile gaming experience to make studies more fun. It consistently assesses the student’s grasp on subjects in a way that only hooks him enough to play and hence, study longer.  A silicon valley startup, one might expect them to take the product to those abroad, but that really didn’t happen. Taking it to the smaller cities of India like Mysore and Belgaum first, it aims at taking technology to those who might not have the access to it yet. In fact, they’re running an event called OUSTATHON with exactly that vision.

What you can learn from Oust

Micro-targeting is the key. Even if the idea behind your venture is one of its kind in the country, it is always a good idea to start small. Targeting a small section, getting them accustomed to the idea and then taking it to a bigger audience increases the chances of it being received well. Apart from that, you become the one who has actually made a difference before vouching for it in public – a humble startup.

Impact Guru is an online fundraising platform that empowers anyone to help the nonprofits and social causes in India. They actively provide alternatives to traditional forms of fundraising for non-profits, which are more often than not, inadequate and expensive. Running a crowdfunding model for these organisations, this startup actually decreases their fundraising costs to less than 10% and increases their impact across the country.

What you can learn from Impact Guru

A crowdfunding business model is a good idea only if you plan to cater to the social sector. While initially it might require you to bootstrap the model itself, it eventually takes shape when people see results. Identify your target audience beforehand so that you can design your promotion campaigns accordingly – not everyone relates to social causes.

Planning on starting your own venture? Something that will impact the world in the real sense? Before you get inspired by the above, keep the following in mind:

“Be the change you wish to see in the world.”