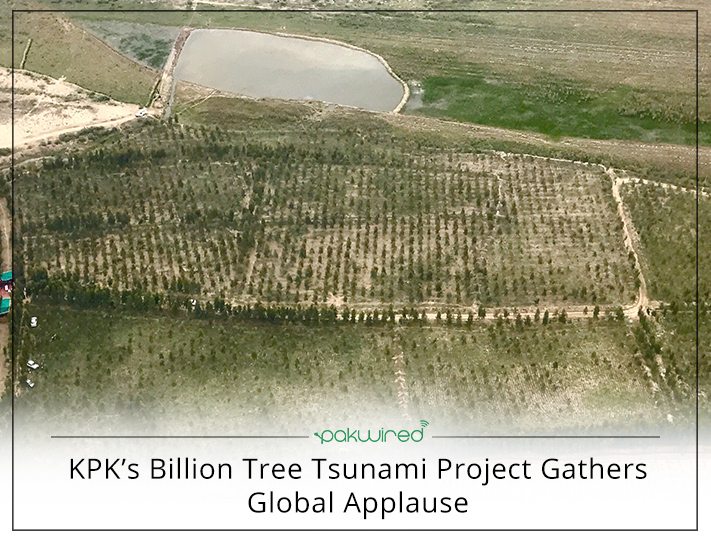 The government of Khyber Pakhtunkhwa successfully planted one billion trees and restore nature to the barren lands under Billion Tree Tsunami Project.

They have surpassed the Bonn challenge to afforest across 348,400 hectares by the end of the year. According to International Union for Conservation of Nature (IUCN), the government has already restored 350,000 hectares of land before time. As a result, this very project gathered plenty of applause from all around the world.

KPK government accounted 40% of planned afforestation and 60% of protected natural regeneration to achieve the target.

Ensuring green growth along with the development of sustainable forestry is the project’s core vision.

The government has also spread 1300 nurseries across the province. The whole world is appreciating the accomplishment of the project before time.

Global media that include BBC, VOA, and Al Jazeera etc have spread the word about Pakistan’s huge contribution to nature. Even World Economic Forum appreciated Pakistan’s effort to resolve the global climate changes.

. @wef's exclusive report on #BillionTreeTsunami ; the project was recognised by the Bonn Challenge and BTT has surpassed it ! pic.twitter.com/6DKPGZoaGN

“IUCN congratulates the province of Khyber Pakhtunkhwa on reaching this momentous milestone. The Billion Tree Tsunami initiative is a true conservation success story, one that further demonstrates Pakistan’s leadership role in the international restoration effort and continued commitment to the Bonn Challenge”

WWF also passed their appreciation to Pakistan for restoration of nature.

In Asia, highest deforestation rate rests with Pakistan. Pakistan lies in the top 10 countries to be witnessing climate change as per Global Climate Risk Index 2017. This is what pushed the Billion Tree Tsunami project to go green and restore the lost natural beauty of Pakistan.

Such projects are now a necessity for Pakistan in order to restore forest and decrease climate change in the country and across the globe.