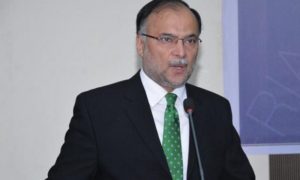 The Interior Minister of Pakistan, Ahsan Iqbal has directed the National Counter-Terrorism Authority (NACTA) to strictly and closely observe the activities of extremist elements on social media. According to the interior minister, the extremists are using different social media channels to spread the propaganda.

Considering the rising trend of extremism in the international as well as national sphere of happenings, it makes absolute sense to figure out the channels being employed to propagate the message. One of the most significant channel for the propagation of extremism has been found to be the social media platforms operating in the digital world.

On Monday, a meeting was held which was chaired by Ahsan Iqbal, primarily, to evaluate the performance of NACTA. During the meeting, the interior minister emphasized on the need of empowering the authority. He also asked NACTA to become more active and vigilant. He further stated:

While speaking about the NACTA law, Ahsan Iqbal said that the law needs to be reviewed with the consultation of relevant authorities. As a result, it will help in eradicating all the errors within it.

In addition, he also stressed on NACTA to formulate and execute strategies which will essentially lead to a national counter narrative against extremism. He said:

According to the interior minister, the unrest in the society is being promoted by employing plenty of false and fake information, which is easily available on the social media. For that matter, Ahsan Iqbal directed the cybercrime wing of FIA to tackle fake news and cease its broadcasting.