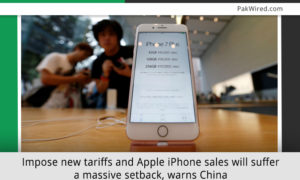 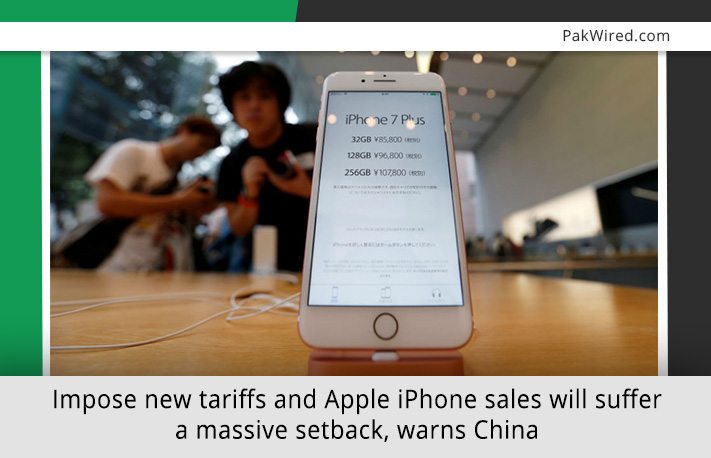 In a recent development, China has warned that Apple iPhone sales could suffer severely if President-elect Donald Trump imposes new tariffs on China.

Apple is among a couple of essential advancement stocks, including Alphabet, Amazon and Facebook, unloading since Tuesday’s election as investors move capital into financial and open works associations seen helping from deregulation and infrastructure spending under President-elect Trump.

Amidst all these developments, the stock of a California company, the Cupertino, declined by 2.5% on Monday. As far as the total loss is concerned since Tuesday’s election, the total tally is almost 5% as compared to S&P 500’s 1.16% advance.

The overall matter has raised quite a few eyebrows as far as Apple investors are concerned. An op-ed published in the Global Times which is also backed by the Government of China has warned ‘tit for tat’ kind of retaliation in case President-elect Donald Trump levy 45% tariff on all imports from China.

A statement from the op-ed read:

“A batch of Boeing orders will be replaced by Airbus. US auto and iPhone sales in China will suffer a setback, and US soybean and maize imports will be halted”

In terms of delivering speedy growth to the tech giant, China has already become a disappointment. The market failed to meet the expectations of Apple which hoped to make up for the steadier iPhone sales in the US and other matured markets.

Moreover in terms of revenue, China recorded a whopping 30% decline in the September quarter. The figures is worse than America’s 7% decline.

Analyst at Rosenblatt Securities, Jun Zhang in his email stated:

“China iPhone sales fell in October, even after fixing supply issues affecting the iPhone 7 Plus”

Don’t you think the sales will further suffer a setback should Donald Trump goes ahead with his tariff campaign?