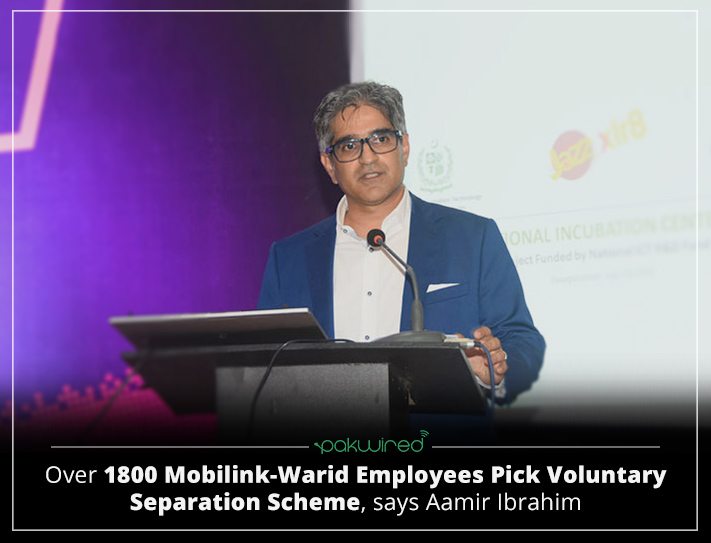 While speaking to the media in Islamabad yesterday, the CEO of Jazz (formerly Mobilink), Aamir Ibrahim, has affirmed that over 1800 Mobilink-Warid employees have chosen Voluntary Separation Scheme (VSS).

What is Voluntary Separation Scheme?

When the merger between Mobilink and Warid took place, they announced Voluntary Separation Scheme for all their direct, contractual and other employees. The notion of this step was to provide an opportunity to the employees to avail free transition in their careers without any hiccup.

Employees who chose VSS were offered the following benefits:

“We couldn’t let all of the applicants go, because we have a business to run. Therefore, we had to reject a good number of VSS applications”

According to Aamir Ibrahim, there were 660 total franchisees from both Mobilink and Warid. However, 260 out of 660 were terminated as 80% of them were Warid franchisees while 20% of them belong to Mobilink.

Aamir Ibrahim, while explaining the reason behind the termination of franchisees, stated:

“Naturally it was not possible for us to keep all of them, especially in cases where both Warid and Mobilink franchisees were next to each other”

He further added that Jazz had to let go some of the franchisees to find the prime balance between the two companies. In addition, the CEO hired foreign consultants and third-party appraisers (not related to the management) to help them in identifying which franchisees are suitable to the needs of the customers.

It is relevant to mention that a friendly exit was formulated for the terminated franchisees. Moreover, one third of them have accepted the terms, inked the letters and received their compensation benefits.

Quick Read: Warid users need to replace their SIMs in order to use 3G/4G service

“I respect departing franchisees. I will continue to hope that they will be our ambassadors even if the relationship ends”

What are the Compensation Benefits?

“Now that still may not be good for someone, who feel that they were doing a great job, but it was not possible to sustain in the long run — not only for us but for them as well”

The compensation benefits for the departing franchisees include: