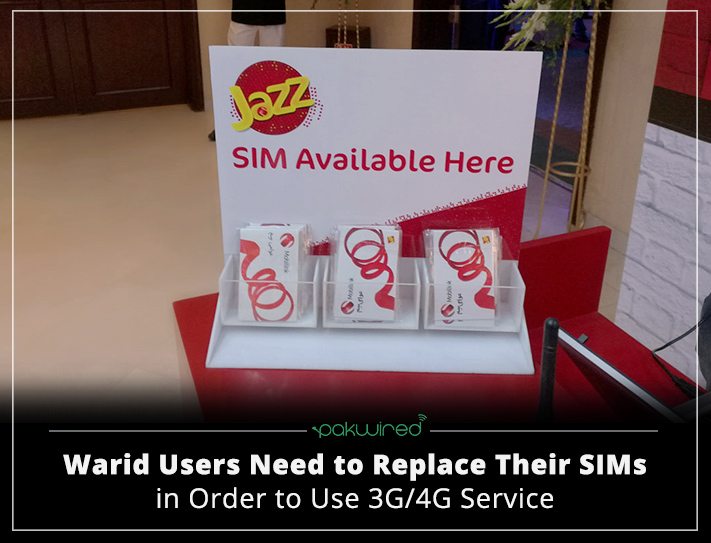 In order to avail the services of 3G and 4G, Warid customers with old non-4G SIMs will have to get their SIMs replaced with the new one. In a recent development, Mobilink-Warid merger has revealed a new and amalgamated brand – Jazz. As far as the integration process of both the telecom companies is concerned, it is close to the completion.

Chief Executive Officer (CEO) of Mobilink, Aamir Ibrahim bid adieu to the old company i.e. Mobilink yesterday. Subsequently, he announced Jazz as the unified brand and publicized it as the official brand identity of Mobilink-Warid merger.

As long as all Warid users are not moved to the network of Jazz, the brand name will stay. However, in the space of next few months, it is expected that the brand name of Warid will be ultimately removed.

Fundamentally, all Warid users will have to obtain new SIMs in order to avail 3G and 4G services. This thumb of rule is applicable to legacy SIMs (users with non-4G SIMs). However, customers who have obtained and are using 4G compatible SIMs will be entitled to use the same SIMs without replacing it.

Also Read: Transaction between Mobilink and Warid merger is finalized

On the other hand, Jazz customers can use their old SIMs for 2G and 3G. However, to utilize 4G services, they will be required to upgrade/replace their SIMs directly from the company.

The whole amalgamation process between the two companies will be completed in next few months. Warid customers (with non-4G SIMs), if they fail to replace their SIMs in a specific time period, won’t be eligible to avail 4G services.

It is worth mentioning that Jazz will notify all the Warid customers about the replacement of their SIMs at a certain time. According to Jazz, this complete exercise of replacing SIMs will be panned out in parts.

To achieve the desired results, feasibility is being planned. All the customers will be notified about when, how and from where they can replace their SIMs.