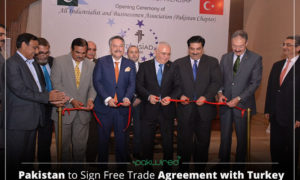 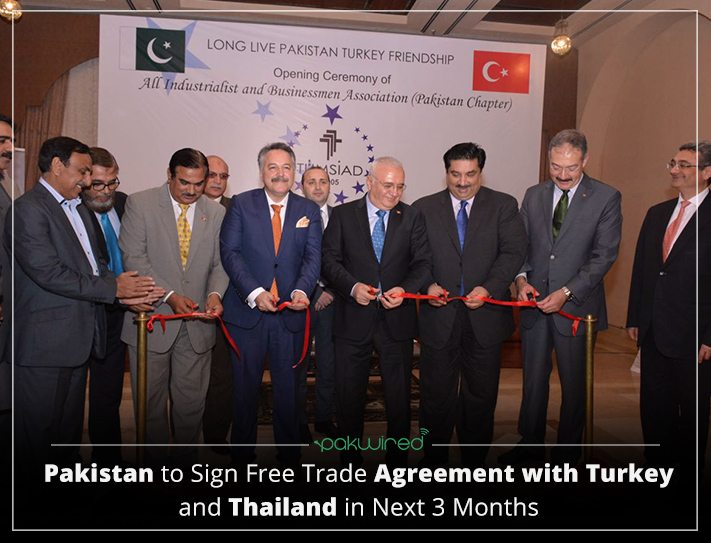 Pakistan is likely to ink Free Trade Agreement (FTA) with Thailand and Turkey within next three months, as put forward by the announcement of delegations of high level dignitaries from Turkey and Thailand arriving in Pakistan on Tuesday (17th January 2017). The objective of their visit to the country is to negotiate terms with the Government of Pakistan on FTA.

While recording the statement, one of the top officials in the Ministry of Commerce stated:

When the official was asked about possible Free Trade Agreement with China, he answered that Phase-II is long overdue. According to the official, FTA was inked between the two countries in 2007. However, before the formal launch of Phase-II, Pakistan is eager to slack the duty on 50 products. While elaborating his statement, he added that the reason Pakistan is keen to minimize the duty on 50 products is to safeguard the domestic market besides ensuring effectiveness and competitiveness.

In another question, he commented that the domestic market is nowhere near at the moment when it comes to competing with matured economies. He observed:

“We are just coping with energy demands for local market. Subsequently, the market would take some time to boost its production and growth”

The official at Ministry of Commerce further went on to state that once Phase-II of FTA with China is launched, it will be certain that both China and Pakistan will be having zero tariffs. However, it would be extremely difficult for Pakistan to offer such concessions at this very stage. In addition to aforementioned statements, he said that China is constantly giving Pakistan some tempting offers. Subsequently, Phase-II will be launched soon since both China and Pakistan are on the same page when it comes to demand list. He said:

“We demanded unilateral relaxation on 50 different products for coming few years before signing Phase-II of FTA. We are in consultation with exporters, chambers including all stakeholders. The reason is to involve them with policy dialogues and getting their inputs in Free Trade Agreement (FTA) with these countries”

The official ensured that Government of Pakistan is determined to shelter the local market. Moreover, it is also looking for avenues to provide competitive environment to both the exporters and the market.