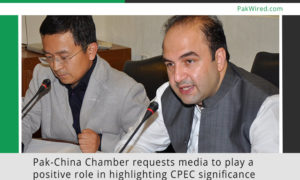 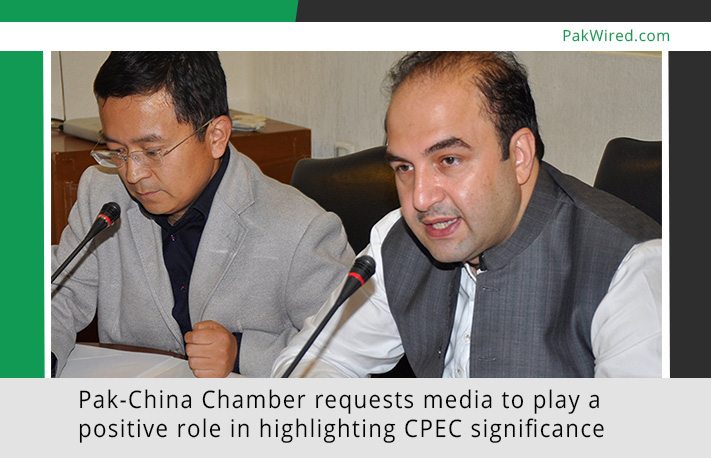 President of Pak-China Joint Chamber of Commerce and Industry (PCJCCI), Shah Faisal Afridi has urged the media to play an active and positive role in emphasizing the importance of China-Pakistan Economic Corridor (CPEC). The president also requested the media to discard all the negative propaganda that could mislead people from both countries.

He believes that CPEC will turn out to be a fate-changing project for Pakistan. In addition, he also mentioned that the enemies of Pakistan do not wish the project to be successful. While commenting on the significance of CPEC, he stated:

“China-Pakistan Economic Corridor is a center of attention for the people. However, unfortunately the enemies do not want to see it successful”

According to Shah Faisal, the security of CPEC is the top priority. He stated that the security situation in Pakistan is stable over the past few years. However, he still stressed on improving the security in region. PCJCCI president also praised the efforts of Pakistan in combating violence and playing a crucial role in regional stability. Likewise, he was also confident that personnel of the security division are vigilant enough to cope with any unpleasant situation.

The president also added that Pakistan is determined to implement each and every project under the umbrella of CPEC. He further said that the country is geared up to combat any challenge that may arise. Pakistan has also given a strong message to the enemies of Pakistan by staying resolute throughout.

Additionally, he informed that about 8,000 Chinese workers are presently working on 210 projects in Pakistan. In addition, 7,000 other workers are expected for executing multi-billion projects along the proposed routes. He also said that China and Pakistan had proposed 29 industrial parks and 21 mineral zones across the country under CPEC. The idea would enable Pakistan to increase its production. Shah Afridi also affirmed that Pakistan will be able to export more public goods and related material in international markets. Under CPEC, thousands of job opportunities will also be created for the people of Pakistan, he added.

Do you agree with Shah Faisal Afridi that CPEC will prove to be the fate-changing project for Pakistan?