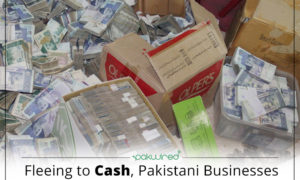 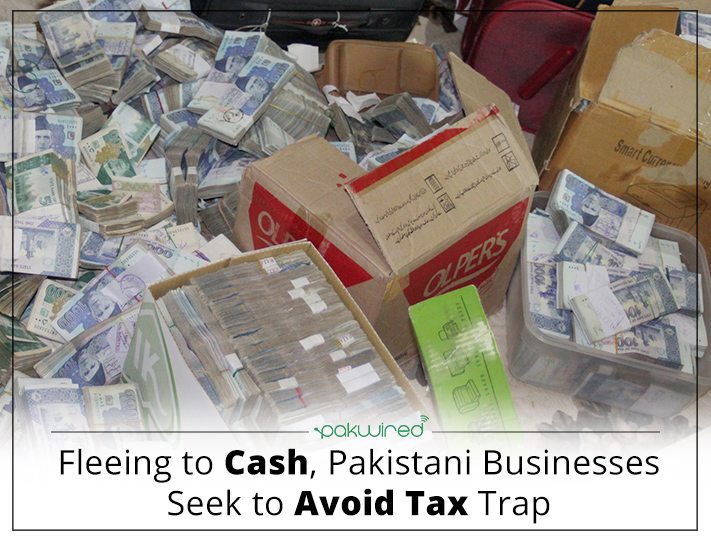 Tax evasion is not a new phenomenon for the South Asian economies but Pakistan has outnumbered its cash in circulation, rising at a fastest growth rate during last 15 years. The amount of cash in the economy surged by 31 percent during the outgoing fiscal year ending June 2016, according to the latest trend tracked by Bloomberg.

This unusual trend is triggered by the government’s recent move to tax every bank transactions above Rs50,000 for non-filers. Tax authorities are justifying this move in their efforts to bring most citizens under the tax radar which are trying to evade taxes for so many years.

Traders and small businesses have not welcomed this stance as they have started piling up hard cash at home and at their business centers. According to a small grocery shop owner, Khan:

“We are already paying enough taxes, on almost everything such as fuel, electricity and phone credit. This tax is unjust”

Also Read: Increase in taxes leads to decline in banking transactions in Pakistan

The government introduced bank charges last year as it was committed to bring most people into the tax bracket. This move was politicized resulting into massive protests by traders and businesses. However, individuals came up with other means to shield their income from taxes such as:

The nation started paying higher taxes on purchase of luxury items such as cars, property or airline tickets from 2014. It ensured filing income tax returns look promising. To combat this pattern, FBR imposed 0.6 percent withholding tax on non-filers. However, this rate was slashed to 0.4 percent amid rising protests and extended till March 2015.

“Let them open 36 instead of six bank accounts, they will badly suffer once nabbed. The tax is very much in place and will not be withdrawn as it aims to bring the non-filers into the tax net”

Pakistan’s cash in circulation rose by a significant 31 percent during 2016. In addition, its money supply also reached its highest number in last 4 years, i.e. 15 percent in 2016.

Despite being a nation of almost 200 million people, the tax to GDP ratio is one the lowest in the region. This shows minimal commitment by individuals and lack of efficient regulatory efforts by tax authorities. Although IMF introduced a few reforms to expand the tax bracket but these reforms were not taken very seriously by the current government with elections almost round the corner.

Rehmatullah Khan Wazir, another member of Federal Board of Revenue, said earlier that only 10,000 members have willingly registered with the tax authorities against the target of 1 million.

“No one is ready to send money through banks. Ask party for a payment and he will tell you to collect it in person”

According to an extreme move to counter tax evasion, Indian Prime Minister Narinder Modi invalidated high currency notes in his country in November last year. This initiative received mixed responses from the financial gurus in his country. Since it was a surprise move, thus millions of Indians headed to banks to change their piles of cash. As a result, 86 percent of cash in circulation was slashed from the economy.

Quick Read: Effects and Influences of the Withholding Tax

Pakistan’s Governor of Central Bank calls it an extreme stance. He gave his opinion that tax avoidance is deep rooted into South Asia’s “DNA which needs to change”. He further added that Pakistan’s informal industry that creates almost half of its economy is not monitored and taxed.

Although Pakistan’s tax collection saw an increase of 20 percent during the last fiscal year but most of this jump came from businesses already paying taxes and not from a broadened tax net.

The trickle down affect has impacted banks in general as deposits grew by a meager 10 percent during the last fiscal year which is the slowest growth in seven years, as per data given by SBP. However, the numbers have seen a respite during last six months increasing by 11 percent till December 2016.

These policy measures do not provide immediate results. Moreover, tax authorities are currently facing multi-pronged challenges in order to widen the tax net.