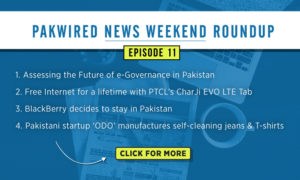 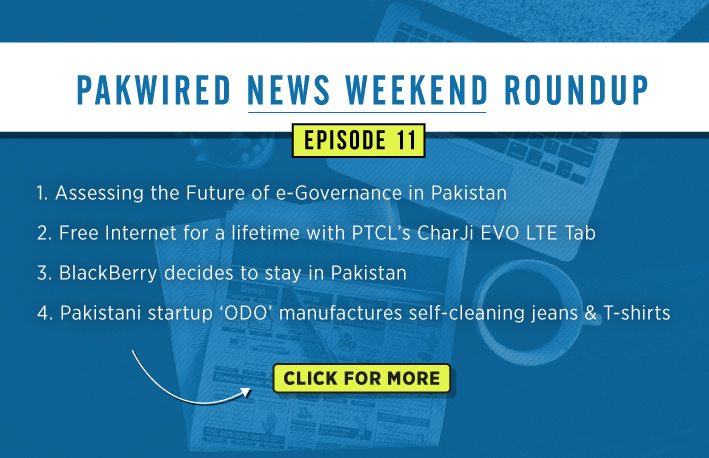 Happy New Year to all our valued readers in Pakistan and across the world! May this year bring loads of happiness, peace and prosperity for you all :)

1. Assessing the Future of e-Governance in Pakistan

Summary: PakWired presents an in-house assessment of Pakistan’s e-governance initiatives in comparison to world developments, especially in neighboring India. We also forecast what we believe to be the near term future outlook for Pakistan based on somewhat ambitious projects undertaken by the Ministry of IT & Telecom to boost this critical sector. Click here to read our piece.

Summary: PTCL had introduced its line of CharJi LTE tablets at a reasonable cost of Rs. 25,000 filled with an assortment of free add-on features. It works with 4G services in Islamabad, Rawalpindi, Lahore, Karachi, Faisalabad and Peshawar. On December 25 (Quaid Day), the corporation announced that users could get free lifetime access to the Internet on these tabs for the first 2,500 customers who purchased its Android (Kitkat) HD tablet the same day. Read more about this news in a report by our colleague S. Aijaz.

3. BlackBerry decides to stay in Pakistan

Summary: In a surprising move, BlackBerry has decided not to exit the Pakistani market after a ‘row‘ with the federal government in late November last year. Reportedly, the Canada-based firm talked with PTA officials and agreed to resolve its outstanding issue with assisting law enforcement authorities for access to data in its enterprise servers. Will BlackBerry adopt the same path it did with Indian authorities and decide to ‘tone down’ on its bizarre anti-Pakistan rhetoric? Let’s see. What we do know is that the service’s popularity has continued to decline after the introduction of other VoIP and OTT facilities and Android/iOS devices.

Summary: A new Kickstarter venture from Pakistan ODO claims it is a self-cleaning denim startup which aims to produce jeans and T-shirts that can clean themselves and will never require you to wash them. Funds have already crossed the $100,000 mark. ODO is the brainchild of LUMS alumnus Salman Chaudry. The startup makes their jeans stink proof by weaving their fabric with purely metallic silver fibers which counteract the bacteria. Interested people can buy jeans, T-shirts and even scarves. ODO will commence its shipping operations in June 2016.

Summary: It seems the merger between Mobilink and Warid has paid off well in time. The latter has recently announced the launch of 4G LTE services in 8 new cities including Kamoke, Muridke, Okara, Sargodha, Sahiwal, Turbat and Kasur. Users in these newly-covered cities will also be rewarded with 7 days of free trials along with SIM replacement options and the facility to purchase affordable handsets compatible with service requirements.

Summary: A lot of people (including some of us in the PakWired crew) were left dazed when popular messenger app WhatsApp suffered almost 45 minutes of downtime on New Year’s Eve. Many have rightly speculated that the disruption could be attributed to the flood of greetings that must have exchanged between the millions of people using this handy tool.

7. Google’s next Android versions will not use Java APIs

Summary: Big news for Android developers out there! According to a report by VentureBeat, tech giant Google is replacing Java APIs in Android with Oracle’s OpenJDK. A Google spokesperson said the objective behind this change of libraries was to create a common code base for developers. Google hoped that Android developers would welcome the change as it would greatly simplify the code on which they build apps.

8. Atlanta among top US cities to launch a startup

Summary: San Franciso-based research platform DataFox has ranked Atlanta as one of the best cities to launch a startup, notably outisde Silicon Valley and New York. This is because the city’s economic development agency ‘Invest Atlanta’ had launched “Start Up Atlanta” in 2012 to encourage entrepreneurship among budding startup enthusiasts. The report further notes that “With a focus on scaling and low cost of living, Atlanta is the perfect place to grow a company from one employee to 100.”

Summary: It seems every other major technology corporation is taking user security very seriously. After reports surfaced that Microsoft had remained silent about Chinese government officials compromising target Hotmail user accounts, the corporation has decided to now notify its users of future state-sponsored cyber espionage and attack attempts. Microsoft wrote: “As the threat landscape has evolved, our approach has too, and we’ll now go beyond notification and guidance to specify if we reasonably believe the attacker is ‘state-sponsored.’”

10. Microsoft’s selfie app for the iPhone

Summary: Speaking of Microsoft, the company released a product called “Microsoft Selfie” for iOS which improves photo qualities like color balance, skin tone and lighting. It’s a somewhat minimalist version of the Lumia Selfie app that was designed for Windows phones. It has 13 filter options to clean up noise and make general improvements, including also a special facility to “compare” your photo with your “digitally enhanced” self.