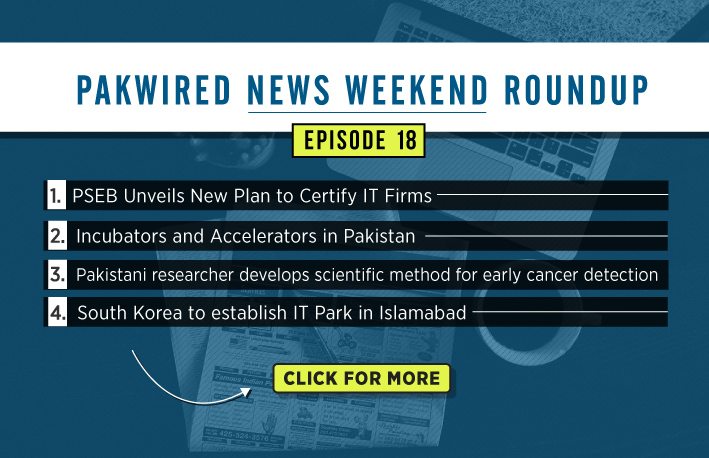 Summary: The Pakistan Software Export Board (PSEB) in the IT Ministry has signalled the launch of a new plan to help local IT companies acquire international certifications. Through such incentives for Pakistani IT companies, the PSEB aims to increase IT exports from the current Rs. 2 billion per annum to Rs. 10 billion by 2025. The development came after Federal Minister for Planning, Development and Reforms Mr Ahsan Iqbal approved the project. Click here to read details by Absar Kazmi for PakWired.

2. Incubators and Accelerators in Pakistan

Summary: Pursuing entrepreneurship in Pakistan isn’t easy. There are simply too many financial and administrative risks to be mindful of. Another major factor which hinders the promotion of an entrepreneurial culture is the lack of government support (read “mentorship”) to budding entrepreneurs. Absar Kazmi has compiled together a list of Pakistani tech incubators and startup accelerators for readers at PakWired. If you plan on incubating your own startup, this will certainly prove helpful! Click here to read it.

Summary: Samir Iqbal, a Pakistani Associate Professor in the Electrical Engineering Department at University of Texas, Arlington has developed a scientific method to help in the early warning and detection of cancerous cells for timely diagnosis. Details of the research he carried out with his team were published in a paper titled “Effects of Nanotexture on Electrical Profiling of Single Tumor Cell and Detection of Cancer from Blood in Microfluidic Channels”. The research by Samir Iqbal and his team is considered a medical breakthrough. Click here for details.

4. South Korea to establish IT Park in Islamabad

Summary: South Korean envoy to Pakistan Dr Song Jong-Hwan revealed during an address at the Islamabad Chamber of Commerce and Industry (ICCI), that his country’s government plans to establish an IT Park in the federal capital. This is part of Seoul’s agenda to improve trade ties with Pakistan. Exim Bank of Korea has agreed to provide $50 million and teams from South Korea are expected to conduct a feasibility study soon. Dr Song added the IT Park will promote also help promote small and medium enterprises. Click here for details.

Summary: At its 3rd Grand Tech Executive Meetup in Karachi on February 19, Chairman Pakistan Software Houses Association (P@SHA) Syed Ahmad announced the launch of ‘Digital Pakistan 2020’. The campaign aims to produce a knowledge-based economy in Pakistan, similar to campaigns successfully realized by countries like Malaysia, Jordan, Indonesia and India. Mr Ahmad said that creation of almost 300,000 jobs and increasing IT exports to reach $5 billion per annum by 2020 are among the core objectives of the campaign. Click here for details.

Summary: TechCrunch reported that Facebook Messenger will start rolling out ads during the second quarter of the year. According to a memo obtained by the website, these ads will only be served to individuals who had one-on-one conversations with companies, not in other instances. Last month, Facebook said more than 800 million people were using its Messenger app on a monthly basis.

Summary: Google recently announced that Google Translate is just close to translating all sorts of content on the Internet in a whopping 103 languages i.e. 99% of the total online population. The company recently unveiled translation support for 13 languages including Sindhi and Pashto.

Summary: Earlier this week (Tuesday, to be precise), the FBI asked Apple to help decrypt contents of an iPhone which belonged to a shooter in the San Bernardino shooting. Apple CEO Tim Cook had responded to this request with an open letter denying the request, calling it a step that “threatens the security of our customers“. NSA whistleblower Edward Snowden tweeted that if Google remained silent, it would be equivalent to supporting the FBI, not the public.

Summary: Sketchfab, TimeSlice Films and GoPro have released a jointly-manufactured product which allows users to interact with a “4D scan” on the Internet. Users can take 360 degree recordings of a subject and loop their videos while simulataneously have the ability to view it from the perspective of their choice. 4D footage like this is also referred to as “volumetric capture”. It has the tendency to achieve mass appeal as a super compliment to VR technology. Click here for a preview.