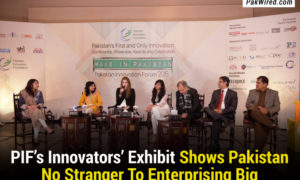 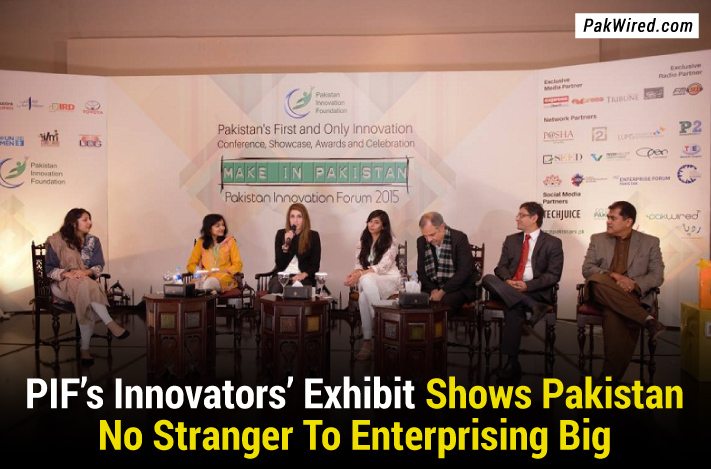 A little more than a week ago, we wrote about Pakistan Innovation Foundation’s innovators’ exhibition at its second annual forum. After three days of auditions in the beginning of December, the event was finally held on the 9th to great success.

Uzma Quresh from UN Women, Hasan Rizvi from LEAD Pakistan and Anoosha Shaigan from Courting the Law were only some amongst many panellists who shared their expertise to accentuate Pakistan’s need to tread its future through innovation and development.

The Makers’ Showcase, held in collaboration with Mobilink, brought 50 innovators from across the country. Impressed by the success of the event and the talent that came through, Prof.Ahsan Iqbal, who is Federal Minister for Planning, Development and Reform, promised to introduce curricular reforms in the education sector that would encourage research and innovation-based learning over only theory. To take PIF into an international platform of knowledge sharing, CEO of Malaysian Technology Development Corporation (MTDC) Dato Norhalim B. Yunus announced the creation of International Innovation Network in partnership with PIF. The network would bring together innovators from Malaysia, Pakistan, Egypt Jordan and UAE, thus giving greater market access and diversity of resources to innovators.

At the event, 12 general category and three special category awards were presented to the winners. Businessman, philanthropist and educationist, Syed Babar Ali, who set up paper and board mill Packages Limited, was bestowed with a Lifetime Achievement Award for his dedication to reforming health and education through his philanthropic ventures. Earlier this year, Korangi teenager Habab Idrees, who placed third in the Intel International Science and Engineering Fair 2015 in Pittsburgh, USA for his multi-purpose solar-powered thermostat device, received a Young Innovator’s Award.  The event included a dozen winners like Coke Studios, Packages Ltd, Pink Rickshaws, Cricflex (NUST) and LUMS SSE.

PIF featured a diverse assortment of innovators and influencers from Pakistan. It showed just how enterprising the nation is even in an environment where resources are hard to come by.

Some of these exhibitors included:

Procheck, a startup that uses smart serialisation for premium and high-volume essential medicines, which would help users assess the authenticity of their medicine, allow pharmaceutical companies track production and analyse data gathered by use of medicines. The startup was established last year amid growing concern over number of counterfeit medicines in Pakistan.

doctHERs is a healthcare marketplace for marginalised and underprivileged women who not only have poor access to quality healthcare, but, due to social customs, are not permitted to visit male doctors. doctHERs allows access between women and female doctors through internet-enabled technologies (like video conferencing), which allows providing better point-of-care diagnostics, by health workers, to treat these patients. The healthcare startup also allows people to adopt a clinic, whereby every new clinic can treat an additional 7,000 patients a year.

Peshawar 2.0 is a small startup working to build a large startup ecosystem in Peshawar, Khyber-Pakhtunkhwa. Through technology, the Internet, design and innovation, the people at Peshawar 2.0 are working to build Peshawar into a city where entrepreneurs of all varieties are not starved for resources and find a rich community to collaborate with.

Cowlar, a wearable device for cattle that allows wireless dairy farm management. This essentially means that the device measures temperatures and tracks the animal’s activity to help farmers monitor their herd.

Team Muhafiz, a comic book series that uses design, storytelling and teenage heroes to tackle social and civic issues for young children. So far Team Muhafiz has dealt with controversial issues like child marriage, corruption, drug abuse and environmental degradation. Their books have been introduced to juvenile prisoners in a bid to rehabilitate them through art than punishment. A contemporary in the same area, 3D animated series Burka Avenger, a show centred around female empowerment, education and crime fighting, was also featured at the PIF exhibit.

Code for Pakistan, a non-profit startup that helps train or create a space for everyday citizens to use their skills to innovate for public and civil services with the intent of creating a smart and more efficient city.

TeleTaleem, a startup to make learning more inclusive and accessible by using information and communications technologies whether for primary education, tertiary education or technical training.

Saad Amanullah Khan, Chairman of Pakistan Innovation Foundation, at the exhibit, stressed the importance of Pakistan recognising the work of its own people and rewarding it. He said, “There are exemplary things that happened in Pakistan – from Orangi Pilot Project, to Easy Paisa, and the like, and we must recognise those innovators so that the hands of others are strengthened.”

There is an old and oft-repeated saying: ‘If you look hard enough, you can even find God’. In realising Pakistan’s potential for innovation and entrepreneurship, looking is half the battle won, and organisations like PIF are an important means to that end.