Jambulingam Street, Chennai, is a local legend. The tar road in the bustling Nungambakkam area has weathered a major flood, several monsoons, recurring heat waves and a steady stream of cars, trucks and auto rickshaws without showing the usual signs of wear and tear. Built in 2002, it has not developed the mosaic of cracks, potholes or craters that typically make their appearance after it rains. Holding the road together is an unremarkable material: a cheap, polymer glue made from shredded waste plastic.

Jambulingam Street was one of India’s first plastic roads . The environmentally conscious approach to road construction was developed in India around 15 years ago in response to the growing problem of plastic litter. As time wore on, polymer roads proved to be surprisingly durable, winning support among scientists and policymakers in India as well as neighboring countries like Bhutan. “The plastic tar roads have not developed any potholes, rutting, raveling or edge flaw, even though these roads are more than four years of age,” observed an early performance report by India’s Central Pollution Control Board. Today, there are more than 21,000 miles of plastic road in India, and roughly half are in the southern state of Tamil Nadu. Most are rural roads, but a small number have also been built in cities such as Chennai and Mumbai.

Adding flexible materials to strengthen tar roads is not a new idea. Commercially made polymer-modified asphalts first became popular in the 1970s in Europe. Now, North America claims 35% of the global market. Modified asphalts are made from virgin polymers and sometimes crumb rubber (ground tires). They are highly versatile: Illinois uses them to build high-traffic truck roads, Washington State uses them for noise reduction and in rural Ontario they are used to prevent roads from cracking after a harsh winter. Polymerized asphalts also tend not to buckle in extreme heat the way conventional roads do – plastic roads will not melt unless the temperature goes beyond 66C (150F), compared to 50.2C (122.5F) for ordinary roads – and are frequently used on roads in the Middle East.

But even in the US, cost is a significant barrier. The most widely used polymer, styrene-butadiene-styrene, can increase the price of a road by 30-50%. In India, high-stress roads like runways and expressways are increasingly using polymer modified asphalts made by manufacturers like DuPont.

While polymer roads in the US are made with asphalt that comes pre-mixed with a polymer, plastic tar roads are a frugal invention, made with a discarded, low-grade polymer. Every kilometer of this kind of road uses the equivalent of 1m plastic bags, saving around one tonne of asphalt and costing roughly 8% less than a conventional road. Dr R Vasudevan, a chemistry professor and dean at the Thiagarajar College of Engineering in Madurai, came up with the idea through trial and error, sprinkling shredded plastic waste over hot gravel and coating the stones in a thin film of plastic. He then added the plastic-coated stones to molten tar, or asphalt. Plastic and tar bond well together because both are petroleum products. The process was patented in 2006. 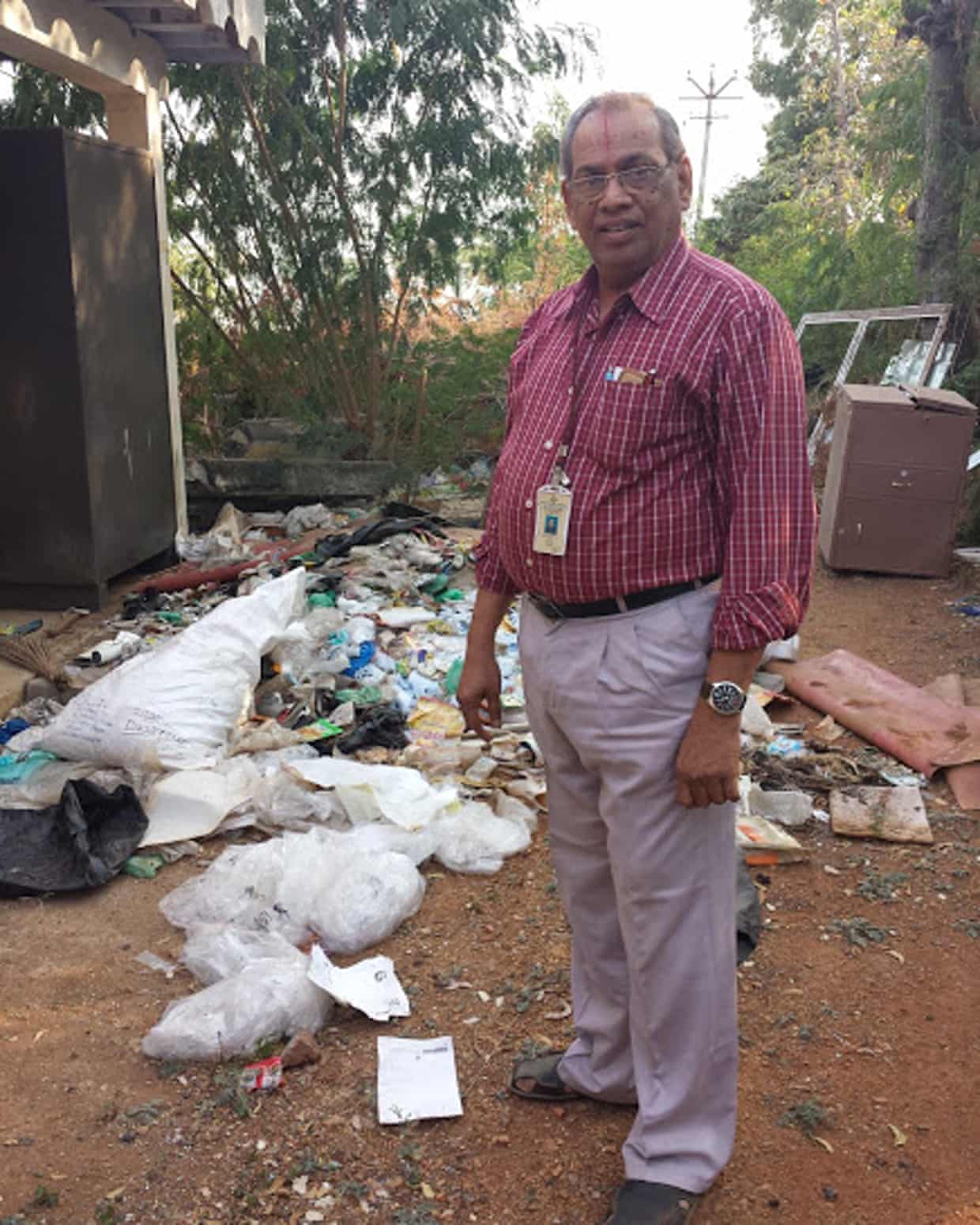 Dr R Vasudevan, a chemistry professor and dean at the Thiagarajar College of Engineering in Madurai. Photograph: Sribala Subramanian

A modified version of the road which adds road scrap to plastic-coated gravel was tested out in March this year on a highway connecting Chennai with Villupuram. It was the first time plastic road technology was used for a national highway. It is expected to reduce construction costs by 50%.

Dr Vasudevan’s lab contains all the raw materials he needs to make a plastic road: shredders, a gas cylinder, a wok – and a pile of garbage. “This is my raw material,” Vasudevan says, pointing to a small pile of bags, plastic cups and foam packaging. These materials are the dregs of the plastic world, worthless even to rag pickers who cannot recycle them. Vasudevan melts shredded plastic over low heat to avoid emissions. Polystyrene is toxic when burned but, when softened, it makes an excellent pothole filler.

In India, plastic roads serve as a ready-made landfill for a certain kind of ubiquitous urban trash. Flimsy, single-use items like shopping bags and foam packaging are the ideal raw material. Impossible to recycle, they are a menace, hogging space in garbage dumps, clogging city drains and even poisoning the air. Delhi’s air, in particular, has been called a “toxic pollutant punchbowl” partly due to contaminants from plastic-fueled street bonfires.

However, urban plastic roads are still a rarity in India. Chennai was an early adopter of the technology, building its plastic roads from waste materials donated by the public. One satellite town even offered a gram of gold as an incentive for citizens to collect discarded plastic bags in 2012. But a year later, the plan was abandoned, because the city could not produce enough shredded plastic waste. It was also rumored that influential road builders, threatened by the prospect of pothole-free roads, had scuttled the project. Late last year, the mayor of Chennai announced the plastic road project was being revived, triggered in part by the devastation to Chennai’s roads after the floods of 2015.

Last November, the Indian government announced that plastic roads would be the default method of construction for most city streets, part of a multibillion-dollar overhaul of the country’s roads and highways. Urban areas with more than 500,000 people are now required to construct roads using waste plastic. The project even has the blessing of India’s prime minister, Narendra Modi, who has made “Swachh Bharat” (which translates to “Clean India”) a kind of personal crusade.

India’s road upgrade is long overdue. A recent road safety report by the World Health Organization (WHO) found that 17% of the world’s traffic fatalities occur in India, with crumbling roads partly responsible for the high death toll. In 2014, potholes alone caused more than 3000 deaths. According to the latest budget released by the Indian government, more roads projects were greenlit in 2015 than in previous years.

With so many projects underway, the Indian government is looking to a range of alternative materials to lower costs. The Delhi-Meerut Expressway, for example, which is currently under construction, may use unsegregated trash from one of the capital’s overflowing landfills to build its base and embankments. In aninterview with the Times of India, India’s roads minister Nitin Gadkari said: “Delhi will get rid of these mounds and we will get the material for laying base with little expense.”

The reintroduction of plastics into the environment is not entirely without consequence. Old roads or poorly built ones are likely to shed plastic fragments into the soil and eventually waterways when they deteriorate as a result of photodegradation, which causes plastics to break down when exposed to environmental factors such as light and heat.

These minute plastic particles called microplastics act like magnets for pollutants like polychlorinated biphenyls (PCBs) and can have an impact on their surroundings. “Once in the soil, these particles may persist, accumulate, and eventually reach levels that can affect the functioning and biodiversity of the soil,” writes Matthias C Rillig, a professor of plant and soil ecology at Freie Universität Berlin.

In the short run, the bigger challenge for plastic roads is execution. They require a hefty dose of government intervention to succeed. Tamil Nadu was the first state in India to actively develop a cottage industry around shredded plastic. Most plastic shredders are women who buy subsidized shredding machines and sell their finished product for a small profit. Job creation for waste pickers and small entrepreneurs is an added benefit of the roads – a point not lost on India’s prime minister.