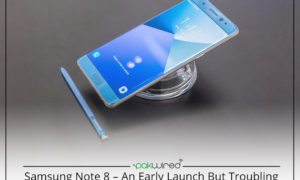 Samsung are planning an earlier than expected launch for Note 8 in a bid to gain competitive edge over Apple. There is however, a tiny problem to sort before all goes well in the Note 8 world, and this time it comes in the form of a front no-button finger scanner.

The marquee Note 8 has been pushed forward by the Korean company unlike the previous models. Galaxy Note have normally been given a debut at Berlin’s IFA event in September, the exception was 2016’s Note 7 which was given an earlier launch. That move was also made in a bid to have a competitive edge over Apple as Apple itself was in the phase of launching iPhone and iPhone plus models.

An August launch for Note 8

Various sources have confirmed that Samsung is trying its best to launch Note 8 during August. This time is being seen as a key period for the Note 8 to gain a foot in the market – Note 8 will be competing against the tenth anniversary iPhone design. Hence the company really is looking for at least three to four weeks to build a promotional and potentially a commercial advantage over the iPhone.

The early launch however seems to have hit a potential roadblock. Earlier leaks indicated that Samsung have moved away from fingerprint sensor on the back of the handset. The back of the handset location has proven to be awkward with the Galaxy S8 and S8 Plus. One of the major factors to that comes as the close proximity to the camera lens.

Problems with the fingerprint reader

The Korean company had been looking for solutions to integrate the fingerprint scanner under the glass on the front of the device. This would make for an extra clean interface and create a better design. The good news however ends over here. Early reports suggest that Samsung is planning to altogether remove the feature.

It is being reported that the implementation of optical fingerprint reader that was tested on the Galaxy Note 8′s display was imperfect due to uneven screen brightness; the area containing the fingerprint reader appeared brighter than the rest of the screen.

Given the problems related to Galaxy Note 7 and how carrying it on planes is still a federally punishable crime, it may be assumed that Samsung will ditch the fingerprint reader and attempt an early launch without the feature. Fingers crossed while that happens, both literally and figuratively in this particular case.