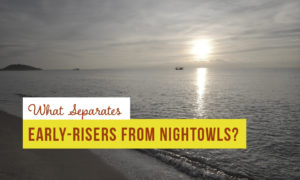 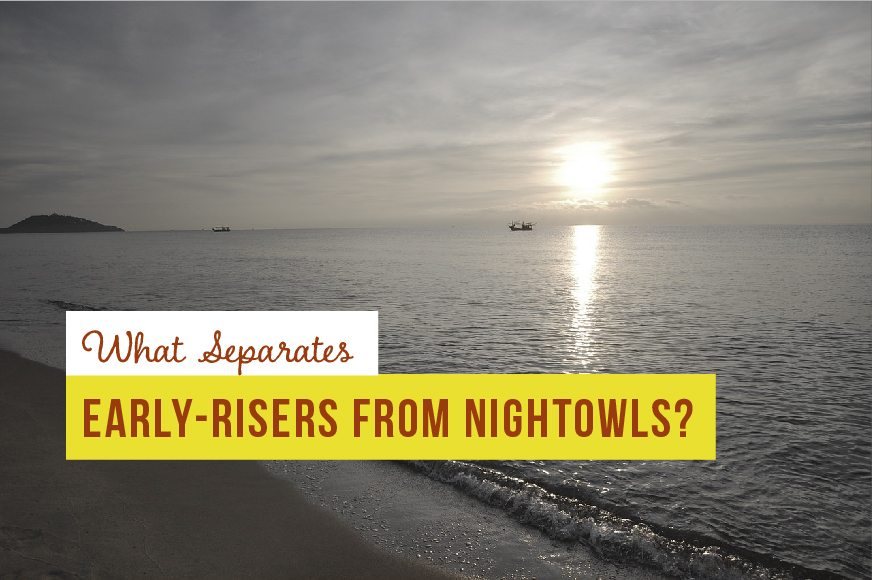 Sleep researchers are finding that the difference between early-risers and nightowls may be more scientific than we once thought. It is believed that chronotypes, or biologically built-in preferences for waking and sleeping, are the primary determinant in whether we rise early or stay up late.

While it’s not always clear cut, most of us have at least a slight preference for late nights or early mornings. Research suggests the majority of us are somewhere in the middle of the spectrum. For some, rising early is habitual and comes naturally, while others consistently struggle to feel awake in the morning. Researchers believe that there’s something more to it than simple motivation or laziness. Genes and biology are now thought to influence sleep cycles and a variety of other overlapping issues.

According to Psychology Today’s report on an Aachen University study, “Different chronotypes are associated with genetic variations, as well as differences in lifestyle and mood disposition, cognitive function, and risks for health problems including sleep disorders and depression.” If this is true, it essentially means that these chronotypes shape our lives.

While sleep schedules may not seem particularly consequential, there seems to be some bad news for nightowls. The Aachen study observed differences in the white matter of nightowl brains- the same differences that are linked to depression. Other studies have suggested that nightowls are more likely to drink, smoke, and overeat when compared to early and moderate risers.

According to a University of Barcelona study, nightowls were said to be more “extravagant, temperamental, impulsive and novelty- seeking, with a higher tendency to explore the unknown.” Not surprisingly, they were said to suffer more insomnia. Staying up late was also associated with ADHD, addictive/anti-social behavior, mental disorders, and even suicide attempts. Male nightowls were found to be more susceptible to mental disorders than their female counterparts.

Fortunately, it’s not all terrible news for nightowls. Surprisingly, other studies have found reason to believe nightowls are more productive and energized throughout the day. Nightowls were also found to be more imaginative, intuitive, and intelligent. They’ve also been shown to have superior analytical/reasoning skills, and more financial/career success.

For those with late-night circadian rhythms, the most obvious problem that arises is how to sync up with society. Most jobs require employees to be up early and out the door. Even for those who work from home or work for themselves, the rest of the world typically operates on an early-riser schedule, making the nightowl’s sleep schedule incompatible.

Researchers have speculated that this “out of sync” issue, commonly referred to as social jet lag, may actually cause even more anxiety and depression (beyond what the nightowl is already prone to.)

The research findings for early-risers are a bit less bleak, suggesting that anecdotes about early birds may actually hold some truth.

However, an equal number of famous names have revealed themselves as nightowls, including the president himself, Barack Obama, scientist Charles Darwin, and musicians Keith Richards and Elvis Presley. Determining who is more successful of the two groups is simply a matter of subjective opinion.

Studies show early risers tend to be happier and healthier because their sleep patterns match the sun’s rising and falling. Early risers were also found to be less likely to take risks.

While staying up late has been linked to mental disorders, early-risers aren’t completely off the hook. One study showed early risers had higher cortisol levels than those who slept in, exposing them to more stress and health conditions. High cortisol levels mean a higher likelihood of exhaustion in the afternoon.

Evolution and the Sexes

A study by professor Dario Maestripieri found that men were more likely to be nightowls and also slept less than women overall. According the Maestripieri, differences in male-female sleep patterns arise during puberty and gradually disappear after women age through menopause.

Maestripieri suggested that nightowls’ association with risk-taking may have something to do with ancient mating strategies.

“From an evolutionary perspective, it has been suggested that the night-owl trait may have evolved to facilitate short-term mating, that is, sexual interactions that occur outside of committed, monogamous relationships,” Maestripieri said. “It is possible that, earlier in our evolutionary history, being active in the evening hours increased the opportunities to engage in social and mating activities, when adults were less burdened by work or child-rearing.”

Supportive of this theory is the fact that nightowls were less likely to be involved in long-term relationships. Male nightowls also reported more sexual partners than early-rising males.

Considering all of this, there doesn’t seem to be a direct answer to the question “which is better: staying up late or rising early?” However, readers can extract the most important details for each type and decide what would benefit them most. For example, if you already suffer mental health problems, staying up late is probably not the wisest decision (and may upset your mental balance). On the other hand, those who work late nights may need the extra time in bed to avoid burnout and high cortisol levels.

This body of research suggests that early risers and nightowls simply have different sets of strengths and weaknesses- likely caused by genetic and biological predispositions.