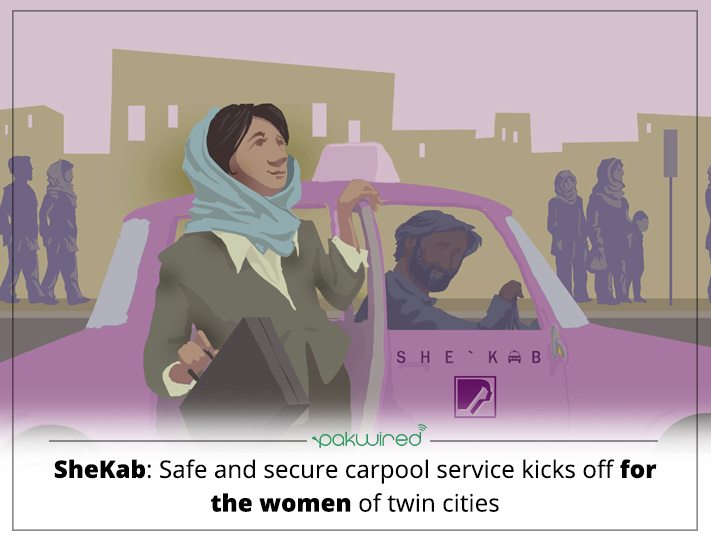 Learning the art of driving was an altogether different and exhilarating experience for 29 year old Ayesha Khan. Subsequently, her passion to drive on the roads of capital of Pakistan has not become a revenue generating source. Ayesha is now an active member of the newly launched carpool service, SheKab as a driver. This service helps her to generate income while travelling to work. The service of Shekab is kicked off from Islamabad and Rawalpindi.

A few years back she practiced driving her father’s car. She commented:

“Being able to drive opens up so many possibilities because you are no longer dependent on other people. Moreover, it also meant that I could even supervise the construction of my house, driving to Rawalpindi Saddar every day to buy materials. It gave me a lot of confidence”

Previously in 2016, she bought her own car which she drove to work at a government ministry in G-5.

SheKab is a ride-sharing service based on subscription. It allows multiple riders to travel together as fellow travelers. Riders subscribe to the SheKab website that provides the estimated costs for different areas. For example, pick and drop service from DHA and Bahria Town to F-7 or nearby is estimated around 8,000 per month.

While sharing her experience, Ayesha stated:

“I first signed up with SheKab as a rider and was impressed by their model and could safely commute to work and sharing a cab with other women meant the cost was divided. I even made some new friends”

Another user of SheKab, Masooma Zehra, a student at the National University of Sciences and Technology said:

“Safety is very important to my parents. If there was no safe way to travel to university, I wouldn’t be allowed to attend. In the past I would use private vans which meant I had to leave the house at 6am even if my first class wasn’t until 9am”

Most of the women in Pakistan think that unsafe and expensive transport leads to unfulfilled educational and employment goals. Additionally, the available transport services are expensive and difficult to approach, due to which many educated women are kept out of the labor force.

While growing up in Islamabad, Hira experienced insecure environment and the availability of inconvenient transport. After achieving her Master degree in the US, she launched the idea of a carpool service exclusively for women. She further explained:

“I began with the idea of women driving women but soon realized that in Pakistan, ideas which are too radical end up failing. Ideas such as the Pink Rickshaw sound great but never pick up because they are too in your face”

Hira thought of utilizing the existing taxi service in the twin cities, hoping to bring a change. She said:

SheKAb came into service in August 2015 initially with five cabs. Now it has 43 drivers including eight women signed up for the service. The regular yellow and black cabs are driven by men, whereas women drive private cars.

SheKab is also planning to lease cars to women drivers in the future. Women can pay monthly installments through their earning from this carpool service.

Hamid Raja, cab driver of SheKab for the last one year voiced that the first priority is to drive women to work. He explained:

“In my experience, women are more punctual and usually go straight home after work, which makes it more convenient for the driver”

Even though he is not very well educated, he feels proud to drive women to work. He said:

“Women are a part of society and we can no longer have them sit at home. It is important that we make it easier for them to work by providing safe transport”

Hira states that majority of the drivers utilize the Punjab government’s taxi scheme to lease their cabs. They pay their monthly installments from what they earn from SheKAb. Even though companies like Careem and Uber are a threat to their living, Hira is determined to continue working with regular cabs as she understands the importance of the additional income her drivers are earning.

She concluded her statement by stating:

“Even when we achieve our original model of women driving women, we will not leave out the hardworking men who drive cabs in our city”

Do you think this initiative is one of the steps in empowering women?