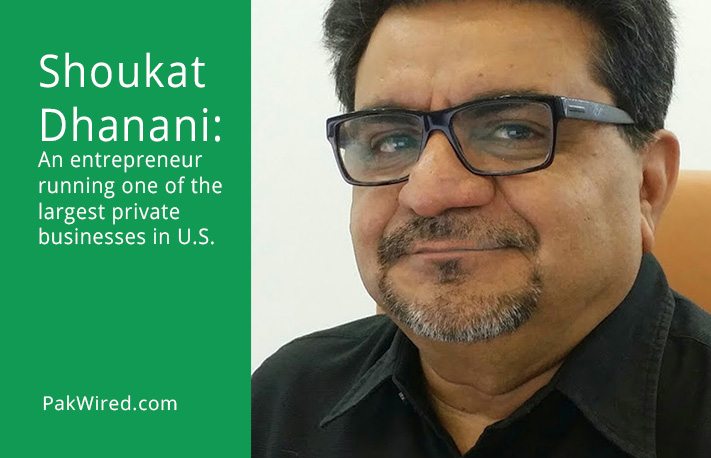 Shoukat Dhanani is one entrepreneur with a vision and a great recipe for success who has kept himself out of the public eye. He is the owner of the Dhanani Group, which has grown exponentially during the last few years.

Dhanani Group is currently the largest franchisee in the Popeyes chain and also a huge player in Burger King franchisee network. This makes him the third largest restaurant franchisee in America. According to Franchise Times, its 2015 revenues stood at $871 million of franchise business alone. The group has spanned its wings in other businesses as well including convenience stores and gas delivery. Mr. Dhanani has quoted, ‘if you add everything up, it would be over $2 billion.’ Thus qualifying this family owned business to reach FORBES’ list of Amercia’s largest private companies.

It is a classic story of long hard work and struggle by a family who built a successful business empire. Their efforts have more significance as they have done it without any injection from venture capitalists or private equity funds.

Hassan Ali Dhanani, the father of Shoukat Dhanani, was gifted with entrepreneurial talent who passed away last year. Hassan Dhanani, started his journey from Pakistan where he started working at the age of 13 by rolling cigarettes and packing them for sale. Mr. Shoukat said:

“He could smell the money everywhere, he saw opportunities and he guided us. He taught us business”

The business started in 1976 with convenience stores, later in 1994 they entered into the franchising business. Dhanani further added:

“In those days, co-branding fast food and convenience stores was just being talked about, and I thought it was a great idea, it was just a corner dedicated to Burger King”

The Dhanani group has grown exponentially

Dhanani empire today owns 130 convenience stores in Houston alone, 502 Burger Kings and 170 Popeyes. The group is completely owned by family without any external financial support. Their business philosophy is, ‘to always believed in staying low-key and under the radar, that’s what their dad taught them.’

By looking at the growth pattern of the group, one can easily say the trend is remarkable. Dhanani group owned 40 Burger Kings in 2010 but since then they adopted an aggressive acquisition strategy. The owner quoted:

“We had a lot of cash. The economy was good. And it was a great time to buy out troubled franchisees. By 2012, the group had roughly doubled in size”

They started purchasing financially troubled restaurants and turning them around. While elaborating the group’s success, he mentioned:

“We consolidated pretty much the whole Houston market, where we are still dominant. We bought those restaurants that were run by franchisees who were not doing well financially for some time. The facilities were old and tired. We remodeled all the restaurants”

While giving financial information he explained they have increased the average sale of each restaurant to $1.35 million as compared to $1 million earlier before acquisition.

They ventured out of Houston in 2012 by purchasing 100 Burger Kings in New England area. He said:

“We doubled our size overnight. We had to put the infrastructure and be ready for what to do when you are managing long distance”

It seemed there was no stopping, as the group further added 255 restaurants from Black Group in 2014, burgeoning by a great leap.

The owner linked his group’s success to Popeyes network, which is also owned by a family member Amin Dhanani. Mr. Shoukat further explained:

Going forward, the group plans to consolidate their restaurant business.

“Our plan is to still continue to grow with Popeyes and Burger King. We are looking at different other opportunities, like fast casual or fine dining” said Mr. Shoukat Dhanani.

However, they don’t seem to make investments hastily, as he said:

“When you have too much money chasing opportunities, the prices keep going higher and I’m not used to paying higher prices or market prices. If we have to wait two years or five years it doesn’t matter”

Despite being one of the biggest private owned companies they are not looking for Wall Street money. Mr. Shoukat Dhanani is still committed to his flair for entrepreneurship as he stated:

“As an entrepreneur, I like the flexibility and the freedom of making my own decisions rather than wondering what Wall Street is going to think”

Let us and the readers know if you have anything to add to this story!