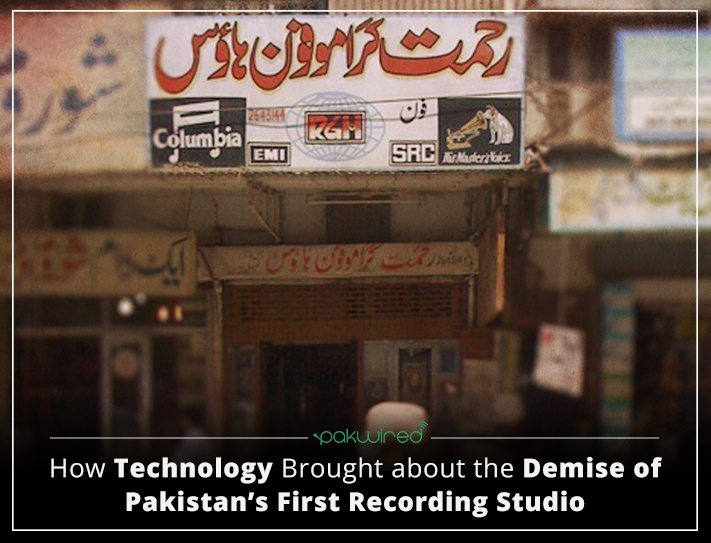 If you’ve ever had a chance to visit and more importantly, roam around in Faisalabad, from the Ghanta Ghar to Kotwali Road, you might have stopped by to snoop around in the Aminpur Bazaar. A chaotic thing of beauty, this bazaar sells everything from food to fabrics.

Just a few yards short of the Ghanta ghar, however, is a monument that used to be all the rage back in the day. If you still haven’t guessed it, we’re talking about none other than The Rehmat Gramophone House.

Even though the RGH, launched in 1949, had a huge collection of gramophone records to its credit, it wasn’t just another run-of-the-mill recording studio. The RGH was home and launching pad to some of the most well-renowned vocalists that Pakistan produced in the early days. From the great Nusrat Fateh Ali Khan to Ataullah Khan Esakhelvi right up until Mansoor Malangi and Aziz Mian Qawwal, many singers and qawwals set out on their journey to stardom through the doors of the Rehmat Gramophone House.

Even before these legends, the likes of Ustad Fateh Ali Khan and Alam Lohar got their recordings made on vinyl at this prestigious studio.

However, it is with a great sadness in our hearts that we report that over a year ago, this prestigious institution faded away quietly, only to be remembered as a fond memory in the pages of time. In its place, today, stands a fabric and curtain shop with no trace of the achievements that had been made in this very building to be found anywhere.

Chaudhary Rehmat Ali, the founder of the RGH himself passed away in the year 2005 but even he had foreseen the signs that had been spelling out the inevitable: the dwindling of business. New and technologically advanced recording studios had slayed the need for vinyl records. His brother, Haji Mohammad Javed, comments that even in 2003 and 2004, the business had seemed bleak. It was only a matter of time that the shop would have to be closed down once and for all. Thus, the recording studio stopped producing music in 2008 and shut down altogether in 2015.

He reported that until the early 2000’s, the shop used to sell between 200,000 to 250,000 cassettes per month. This figure took a blow in the mid of the 2000’s due to various reasons-piracy being one of the biggest. Where the record shop was producing 5,000 original cassettes, pirates would produce and sell 200,000. Despite suing the pirates repeatedly, no action was taken against them and in the end, the RGH would have to take the lawsuits back.

Apart from this, technological advancements also took a toll on the business. When people had free access to music from all around the world, who would be willing to spend time and time again on cassettes, vinyls and the equipment that would be needed to play them?

Even though it has now been closed for some time, the RGH archives are still home to a vast depth of music throughout the ages-including some marvelously rare records.

However, the institution that symbolized the phenomenon that was the Rehmat Gramophone House, is, sadly, no more.