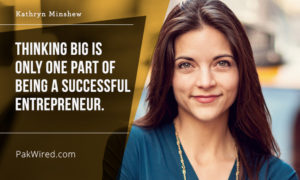 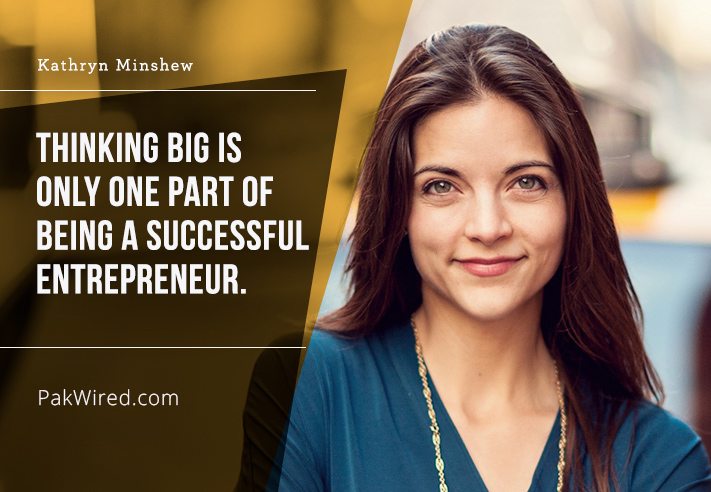 “Like many entrepreneurs, Kathryn Minshew’s first attempt at starting a company ended in failure—not because the idea (a networking site called Pretty Young Professionals) wasn’t good, but because the founders disagreed on how to run the company. But she didn’t give up.

In 2011, she co-founded a new startup, called The Daily Muse (later shortened to The Muse) with $2,710 in funding from Indiegogo. Her new small business caught the attention of The Huffington Post and TechCrunch and had more site visits in its first month than PYP had in its very best month. Due in part to its success, much of the staff of PYP jumped ship to join her. The company was accepted into Y Combinator, Paul Graham’s seed fund/accelerator where the company got money, advice, and even more attention. They haven’t looked back since. Today The Muse has well over three and a half million monthly users and is growing fast.

Before starting The Muse, Ms. Minshew was involved with the Clinton Health Access Initiative (bringing vaccines to Rwanda and Malawi) and was a management consultant an McKinsey.

Throughout her career, Ms. Minshew has spoken on university campuses, has been interviewed by business magazines and has presented at conferences. She’s been named to Forbes’ 30 Under 30 in Media and Inc magazine’s 15 Women to Watch in Tech. And The Muse was one of The Wall Street Journal‘s Startups of the Year in 2013. So it’s no surprise she’s had a lot to say about entrepreneurialism, startups and success. Here are a few things she’s said that we think other small business owners will be inspired by:”

1. Understanding your employee’s perspective can go a long way towards increasing productivity and happiness.

2. Even your most talented employees have room for growth in some area, and you’re doing your employee a disservice if the sum of your review is: ‘You’re great!’ No matter how talented the employee, think of ways he could grow towards the position he might want to hold two, five, or 10 years down the line.

3. The first time you meet someone, they’re a new acquaintance, the second time you have a bit of an understanding, and the third time you meet them, you’re old hats.

4. There were so many lessons I learned the hard way: missing out on a raise because I didn’t know to ask, having colleagues consistently get credit for my ideas because of how I spoke up in meetings. When I looked for a resource that addressed the challenges I was facing, I couldn’t find it. There was nothing.

5. You know, as most entrepreneurs do, that a company is only as good as its people. The hard part is actually building the team that will embody your company’s culture and propel you forward.

6. I had been a veteran of pretty challenging job searches, so I knew firsthand how frustrating, confusing, and demoralizing the job search process can be. Even after you get a job, many people join companies and discover in the first couple weeks that they aren’t a good match with the personality and values of the company.

7. Launching a start-up, you need to get a lot done quickly. Every day is different. Everyone pitches in with everything. It’s easy for the founding team to say, ‘We’re flexible. We all help out with everything!’ But when it comes to making decisions – that flexibility can spell inefficiency and disaster.

8. For those working menial jobs or putting in 100-hour weeks for corporations, the lure of starting your own business can seem like a great way to get more flexibility, upside, and ownership.

9. One of the top causes of startup death – right after cofounder problems – is building something no one wants.

10. Thinking big is only one part of being a successful entrepreneur.

12. Sure, it’s fun to chat with people with interesting backgrounds who seem to have a passion for your company. But a job interview is not a friendly chat. You need to determine whether candidates, can they really do the job. So ask them to prove it.

13. When talking to first-time entrepreneurs, I often ask them: ‘How do you know that people want your product or service?’ As you can expect, the answer is often that they don’t yet, but will know once they launch. And they’re right. That’s why it’s critical to launch as quickly as possible so you can get that feedback.

14. Call it nature or nurture, there are differences in how men and women approach professional conduct, and facing these issues head-on will make us all more equipped to succeed.

15. Done right, a performance review is one of the best opportunities to encourage and support high performers and constructively improve your middle- and lower-tier workers.

16. Get your product in front of actual, living, breathing strangers. Your college roommate’s approval does not mean there’s market demand.

17. The most important thing in startups is getting a product to market, as imperfect as it may be, and then iterating on it and continually making it better. A first rev of a site that has a few typos may not be perfect, but it was the start of something that I deeply believed in.