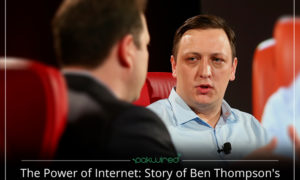 If you’ve been following the media and technology industries for a while, you’ll be familiar with the name Ben Thompson. Ben has built a successful empire for himself just by proving the soundness of his analyses through publishing his thoughts on Stratechery, his blog.

Today, Ben has built a great fan following and his number of paid subscribers is certainly sky-rocketing.

When asked about how and why he did it, Ben said that he felt that he had a lot to say that people would not only find interesting but would also find valuable. Hence, he started talking and not only about products but also technology and business strategy.

Thompson talked about how he used the Internet as his biggest tool to get subscribers. As to when asked about how many subscribers he has, Thompson only replied with a very cryptic, ‘a lot’.

However, he did tell us that he has subscribers in over 30 countries across the world and according to his own word, he had 1,000 subscribers back in 2014 and we can only expect this number to have increased up until now.

As to how Thompson made this all happen, he said that it’s all about owning a niche that you already know about. Thompson said that it was easiest to own a niche about which one had a significant amount of knowledge. He said that he had to work with subscriptions as the only paid model. Speaking to Recode, Thomson said:

To do an ad-based sort of business, you’re just getting backed up behind Facebook and the New York Times like everyone else, and there’s no way to break through.

Thompson said that even if $10 per month or $100 a year was a small amount when looked at upfront individually, it grew by multiples due to thousands of people who were finding it worth it to dish the amount out. The key, however, remained that Thompson’s content was so engaging and sound that the subscribers knew that they were getting to learn so much, and this kept the subscription count climbing higher.

While explaining the business strategy at work for Thompson’s singularly maintained publishing empire, he said:

Certainly I work hard, but the amount of work I’m doing today is the exact same amount of work I was doing three years ago. The only difference is my income is 100 times higher. And it’s because that $10 scales, and it scales very, very well.