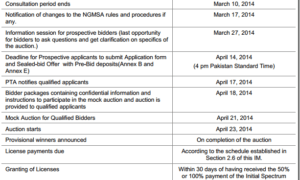 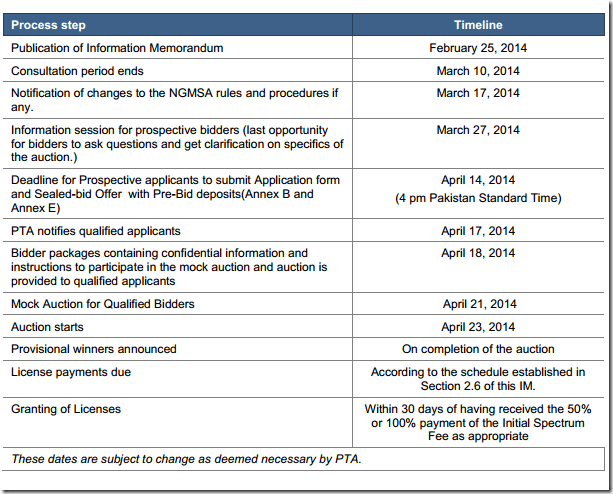 Yesterday, the Pakistan Telecommunication Authority announced the date for the Information Session for prospective bidders. This is the last chance for interested bidders to clarify any questions they might have about the license auction and will be held at the PTA HQ on March 27. The latest IM released detailed a timeline leading up to the auction and issuance of licenses in April, and the fact that the PTA is keeping to the schedule so far bodes well for the auction which is supposed to take place on April 23.

Schedule Leading Up To Auction Date

The next event, after the Information Session, is the deadline for bids, which should clarify which companies will be bidding at the auction. It is popularly assumed that Mobilink, Ufone, Telenor and Zong will all bid for the licenses, but many people are unsure about Warid. The auction is still slated to take place on April 23, 2014.

Telecom Operators Getting Their Networks Ready

With so much riding on the auction, and the ensuing issuance of licenses, the larger telecom operators in the country have started rolling out and testing their 3G networks.

Mobilink just announced that they will complete the rollout of the largest 3G ready network in the country by July 2014. As the largest telecom operator in the country, Mobilink is almost guaranteed to bid for, and win, at least the 3G license. They will have over 9,000 cell sites across the country, and hope to provide their customers with the best possible voice quality and fastest data speeds. Mobilink has invested over USD 4.3 billion in Pakistan in an effort to modernize its network ahead of the license auction, with help from VimpelCom.

According to Bilal Munir Sheikh, Chief Commercial Officer, Mobilink, “Mobilink’s 3G ready network established over Pakistan’s largest cellular footprint sets us apart from our competitors as more than 37 million Pakistanis trust us with their communication needs. I am confident that our improved network will go a long way in providing the best customer experience with seamless connectivity over the most robust and technologically most advanced network of Pakistan.”

Telenor has also recently announced that it is ready to roll out 3G services, with over 7,500 cell sites ready across the country. Unconfirmed reports say that Telenor has also started testing its services in limited parts of the country, but we are waiting to confirm this with the company itself. Telenor is the second largest telecom operator in the country, after Mobilink, and is another operator almost guaranteed to win a license.

We’ll keep updating you with information about the 3G/4G license auctions as and when PTA announces more information. Which telecom operators do you think will win the licenses? Leave us your opinions in the comments.