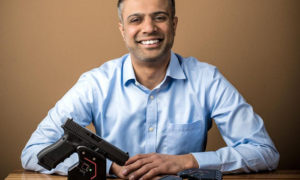 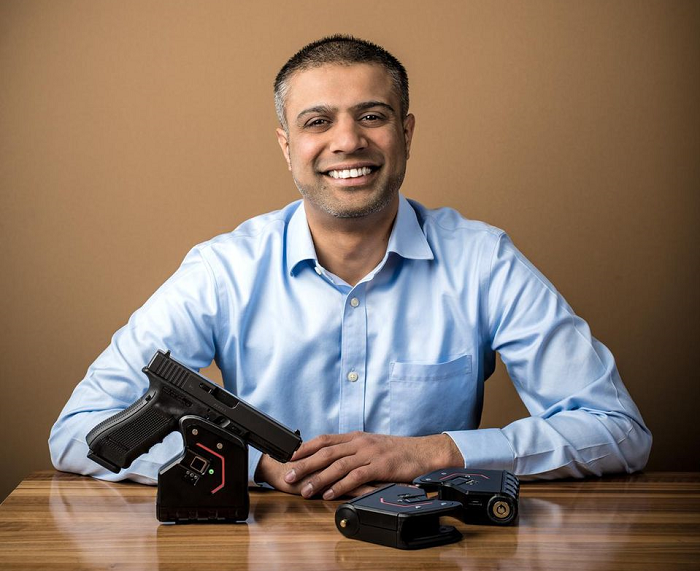 Necessity is the mother of invention, and Omer Kiyani’s gun locks venture has been an embodiment of this age old wisdom. With his start-up Identilocks, Kiyani is creating a dent in the gun control culture in America, one device at a time.
As per the data shared by the Smart Tech Challenges Foundation, resourced from the Bureau of Justice statistics:

There are about 20,000 deaths and injuries from unintentional shootings and young people’s suicides every year, and about 250,000 guns are stolen every year.

An immigrant from Pakistan, Kiyani studied at Purdue University and later landed a job at Bosch, the world leading  multinational in engineering. He worked on airbag technology for a decade, and this is where his expertise were honed. It was during his stay at Bosch that the Sandy Hook Elementary School shooting occurred on December 14, 2012, in Newtown,Connecticut, United States. The 20-year-old shooter in this unfortunate tragedy claimed 28 lives using his mother’s Bushmaster rifle.

A gun owner, and a father of three himself, Kiyani found this incident to be deeply impactful.  And this became the starting point of his journey of building the biometric lock, Identilocks. Despite there being multiple gun locks available in the market, none offered in a pressure-filled situation the security and effectiveness of biometric technology. This technology works via fingerprints without any procedural add-ons. However, here’s the catch: according to the National Shooting Sports Foundation, an integrated biometric technology meant for gun locks is suspected to interfere with a weapon’s functionality.

This is where Kiyani’s experience came to play.

For the next four years he worked on building and perfecting his invention. During the course he applied and secured a sound $100,000 grant from the Smart Tech Challenges Foundation, and also managed to find angel investors and an American manufacturer for his gun locks product.

Next came the stage to evolve from an engineer into a business person. This was when, as demanded by the investors, Kiyani quit his job two years ago. Now, Identilocks became his sole boat.

Riding over a bumpy road, he finally launched the perfected biometric gun lock for sale, in the third quarter of 2017. The design fits handguns, including Glocks, most Smith & Wessons, and some models of Sig Sauers, and allows the locks to be detached within .3 seconds. Currently priced at $199, such that each transaction remains profitable, Identilocks is selling on sites including gunsafe.com, Amazon, Brownells, Cabela’s and glockstore.com. During the first year, Kiyani shared, the company has been able to earn between $800,000 and $1 million in terms of revenue.

Presently picking up a momentum with selling about 500 locks a month and sized at three employees, the engineer from Pakistan expects to turn a profit in 2019. However, he maintains that this gun locks product has always been more than a business idea for him.

“I’ve been a safety engineer all my life. I felt this was a responsibility as a citizen.”

Kiyani is now being approached by commercial manufacturers interested in acquiring the company. For him, though, more than the acquisition, the next big step is to improve upon the product design by introducing more range variants to fit different weapons.