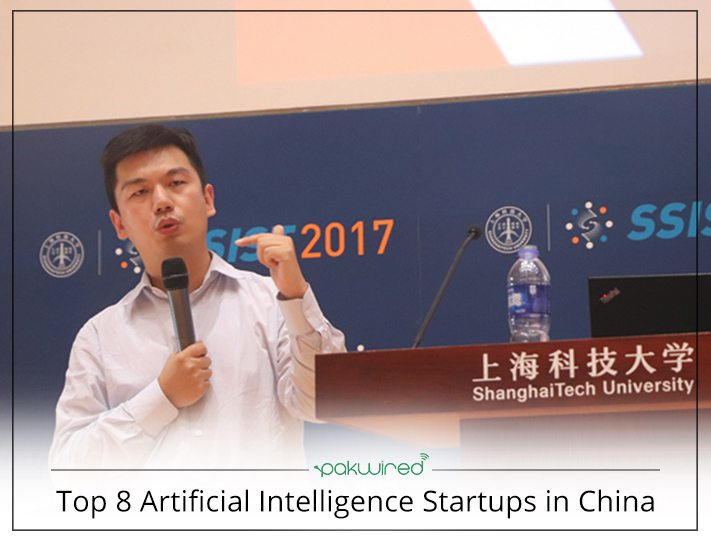 Artificial intelligence is now at the core of the next wave of industrialization. A completely new computing paradigm is rising where machines are starting to comprehend and anticipate what users want to do and will in the future be able to do it.

A new machine learning model known as deep learning enables computers to distinguish between objects and text in video and images. Organizations that have unique access to data and can process new forms like digital images, video, and social media have a competitive advantage in being able to describe real life situations and predict outcomes through AI.

In 2016 alone, 202 Chinese AI startups have been able to raise a whopping local as well as foreign investment. Venture capitals in China have already shifted away from big data to AI. Here are the eight leading Chinese startups:

iCarbonX, a Chinese AI company started in 2015 after receiving $600 million in funding is considered a unicorn – a startup with a current valuation of $1 billion.

Because Chinese have different privacy expectations than the US, iCarbonX would have a competitive advantage in building its digital life ecosystem. With world leading partners, iCarbonX plans to observe, study, guide and care for users’ health from the beginning of life. It will provide individualized health analysis and predict users’ health index through advanced data mining and machine analysis technologies.

Its recently released app, Meum, makes use of users’ biological, psychological, and behavioral data to advise on how to live better and in healthier ways.

Mobvoi, founded in 2012 by former Google research scientists Mike Lei and Zhifei Li, is the only Chinese company offering Chinese voice recognition, semantic analysis, and search technologies on a single platform. It partners with Google’s Android Ware and includes Google and Sequoia Capital among its investors.

In addition Mobvoi has received investments from Google for its Ticwatch smart watches. It has developed Chumen Wenwen, a Chinese version of Siri, and works on voice recognition, natural language processing, and vertical search technology projects. Mobvoi has recently received funding of $180 million from Volkswagen and its newest project is developing AI for VW automobiles.

Face++, founded in 2012, has developed a cloud-based application that anyone can use for facial recognition. Their facial recognition tool is used by Jiayuan, a Chinese dating site where you can search their online database to compare it with a photo of someone you consider attractive.

Face++ also detects and locates bodies in images, detects body outlines, and gets body attributes such as gender, clothing and color. The tool is used by China’s Ministry of Public Security, Lenovo, and Didi Chuxing, China’s largest ride-sharing company.

Face++ is also used by Alipay, Alibaba’s online payment app to scan your face in order to complete transactions. The giant Apple components supplier Foxconn is also an investor and there is speculation whether smiling at your iPhone could one day unlock it.

UBTECH Robotics, with a current valuation of $1 billion was founded in 2012 and wants to create an intelligent AI companion for every home. The company has launched three lines of robots, Alpha, Cruzr, and Jimu, a do-it-yourself robot kit. The cloud-based humanoid Cruzr can be used in customer service, while both the Alpha and Jimu are made for children’s play and learning.

CloudMinds, founded in Silicon Valley in 2015 to support cloud-connected smart machines through an end-to-end ecosystem, has received $131 million from investors like Foxconn and Softbank.

CloudMinds is starting its progression from AI exploration to CI, or cloud intelligence. Its aim is to build robots whose “cloud brains“ will resemble human neural networks. So far, the company has produced a guide helmet called META to help visually impaired people see their surroundings through localization, mapping, visual and voice recognition technology. Another product in the works is a housekeeping robot to be launched in 2025.

Its facial recognition is applied to bank card verification and security systems. Partnering with SenseTime are companies such as China Mobile, NVIDIA, Huawei, UnionPay, Xiaomi, Iflytek, Sina Weibo, and JD.com. SenseTime’s technology is also being used for security technology focusing on text, body shapes, and vehicles.

Roobo, founded in 2014, has so far manufactured smart bone-conduction headphones, an intelligent drone, and a cordless VR headset. It is currently developing a wireless VR headset to compete with Oculus, an AI-powered robot that interacts with your kids to make them smarter, and a drone that follows you around.

Its ROSAI Robot System is an integrated system with hardware components, software operating system, and AI. The Pudding robot, created to be your child’s best friend, tells stories, plays music, teaches vocabulary and facts, and even reminds them to brush their teeth. There’s also a robotic dog named Domgy. Roobo has recently partnered with Nuance Communications to develop intelligent speech and language recognition for its robots.

Unisound, founded in 2012, is the “voice of Siri” for millions of smart Chinese appliances and devices. The company designs voice recognition, language processing, and big data technology for a range of industries including the health industry. The company enables home appliances such as refrigerators and air conditioners to hear consumer voice commands.

About the Author: Josh McAllister is a freelance technology journalist with years of experience in the IT sector. He is passionate about helping small business owners understand how technology can save them time and money. Follow him on Twitter or GooglePlus.