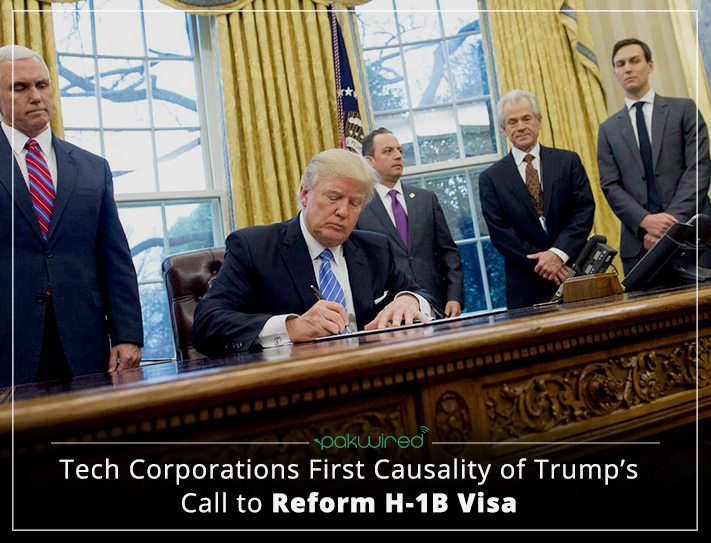 Ever since Donald Trump took over the United States, he has made it a point to always be in the news – positive or negative, does not really matter, in the global community. In a latest news, Trump’s administration is raring for round no. 2 of the Muslim Ban, which is now being officially referred to as Extreme Vetting. The round 2 is to reform the H-1B work visa. Essentially, this move will dent the tech companies greatly.

H-1B is the non-immigrant visa in the USA which empowers the employers in the country to recruit foreign workforce on a temporary or contractual basis. This kind of a visa is generally utilized by technology companies and budding startups who employ the services of talent from outside the country.

The H-1B visa program can accommodate 85,000 foreign employees in a year. This limit of visa has been in place for number of years now and it is said to be oversubscribed. There is a lot of pressure from political quaters (both left and right-wing) for a chief reform in H-1B visa program. However, it is relevant to mention that not everyone would be pleased with the kind of reform the world will possibly be getting from the Trump administration.

According to Bloomberg, following is the draft from the upcoming immigration executive order:

“Our country’s immigration policies should be designed and implemented to serve, first and foremost, the U.S. national interest. Visa programs for foreign workers should be administered in a manner that protects the civil rights of American workers and current lawful residents, and that prioritizes the protection of American workers — our forgotten working people — and the jobs they hold”

The move to reform the H-1B visa will hurt tech companies including Amazon, Apple, Google, Microsoft, and most of the Silicon Valley. No precise strategy or plan has been presented or shaped as of now. Neither there is any news on what alterations will be amended in the visa policy.

Quick Read: Silicon Valley Announces Its Side In The Current Immigration Ban

Knowing Trump’s stance on immigration and his ‘America-first’ policy, there might be some outrage between the President and the tech companies. Before taking the oath for the presidency, Donald Trump was anticipated to bring a lot of hitches for the technology companies.

Some of the people living in USA have used the term ‘constitutional crises‘ for the recent chaos following Trump’s orders of imposing ban on seven Muslim countries.

Pertinent to mention here that Seattle-area tech giants are already rearing for a legal battle against Trump administration. Microsoft, Amazon are collaborating together in suing Trump government over restrictive immigration.