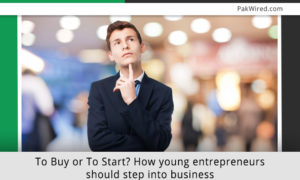 It’s a fact that there are more entrepreneurs in the millennial generation that any that came before them. This generation also has higher levels of career independence than their predecessing generations. However, that is not to say that there haven’t been startups before this generation came into the frame. Startups have been coming and going since long before most can remember and some that started off as mere startups have now established themselves as big companies. And no matter how diverse they may be, every successful startup has one thing in common: A visionary leader.

Should they take the big leap and attempt to build a new business from scratch?

Should they buy into a new business as a franchise, partner or sole owner?

Each choice comes with its own set of rewards and punishments. So when it comes to millennials, which one is more beneficial for them?

To put it short and concise, anyone who starts a new business is usually someone who feels that they can offer a product or a service that someone else isn’t offering to the market, at least not as well or on the scale that they are. Whereas someone who’s interested in buying a business is someone who would likely improve on an existing business model which would be better executed when they buy an existing and established business. The buyer also has the option to get more investment in a previously established business because of any existing good-will or standing in the market.

However, at the end of the day when we look down to it, it’s very unlikely that these choices matter to any millennial who has already started working on what they actually want to do. Because looking at the myriad of startups that have opened up in the past few years, it’s rather hard to pitch an idea that hasn’t already been produced at some level. Similarly, not many millennials might possess the financial safety net it takes to buy or invest in an existing business which is why, in this writer’s opinion, now one of the only things that is left to be pursued is professional autonomy. However, as to how one can reach THAT goal is something that many of us will have to decide for ourselves based on both, our choices and our circumstances.