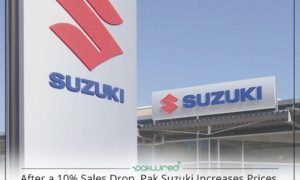 On Saturday (1st April 2017), Pak Suzuki Motor Company Limited (PSMCL) announced increasing the retail prices of its cars without disclosing any special reason. The company issued the statement by means of a letter sent to all the authorized dealers informing them about the price hike.

The increased retail price will include ex-factory product price and the freight charges sustained on vehicle to reach the destination of a specific dealership. It is relevant to state that the price will be exclusive of advance income tax.

Another key point mentioned in the official letter is that Pak Suzuki will refrain from charging the price difference on all pending orders which it received and accepted before 31st March 2017. Moreover, there won’t be any additional or hidden charges for metallic colors.

Pak Suzuki has revised the prices of 5 cars including Bolan, Ciaz, Mehran, Ravi and WagonR. The revised prices of each car is as following:

Read More: With a rise of Rs13 per liter, petrol prices expected to increase up

All the aforementioned variants of Suzuki Mehran got a raise of Rs5,000.

At present, it is unclear as why Pak Suzuki augmented the prices of 5 of its cars. The reason could be anything from declining profits to increased production costs. Nonetheless, one thing is for sure; the price hike is not going to amuse the car enthusiasts. What are your thoughts?