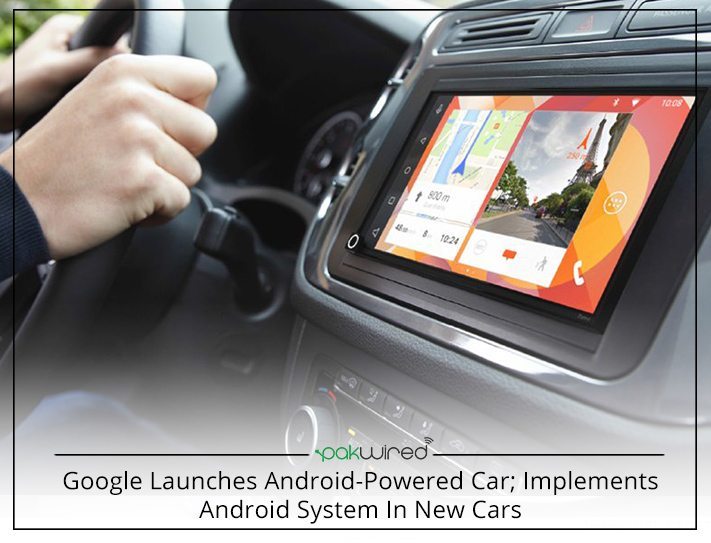 Google’s recent contribution to the automotive industry came in the form an Android-powered car. The Maserati Ghibli was displayed last year at the Google’s I/O Developer Conference. Although the car looked like just a basic sports car to viewers; what peaked their interest was the interior of the car. Despite having the fear of giving too much information to Google, many auto-manufacturers have now decided to invest in the idea.

Reporting on the matter, The Verge quoted Patrick Brady, VP of Engineering for Android saying:

“The traction we’re seeing in the car space is just ridiculous. It’s surprising even to us and has caught us off guard”

Everything gets controlled through Android

Google has taken one step further as it modified the android system to use it in automobiles. From controlling basic operations such as rolling down the windows, heating and cooling, to other complex operations of controlling the infotainment system, all could be handled by a single android system. The functionality of using the whole speedometer panel through android was also added.

A 15-inch touchscreen was fitted in the Maserati Ghibli to give users an idea of what they were going to invest into. This touchscreen provided an interface which contained all the car-related operations the android could perform.

Previously, automakers used to implement their own software in their cars. This took a vast amount of money and years of software development. However, the arrival of android system in cars proved to be a turning point for auto-mobile manufacturers.

From small to big car manufacturers, everyone is considering to implement the android system in their cars. As manufacturers saw the ease of implementing the system, they didn’t bother to develop their own software. Android-powered car was released in 2015. During the same year, Apple launched its own Apple CarPlay. This proved to be a great competitor for Google.

Android Auto is not actually the whole android operating system. However, it is just an interface which runs through Android. On the other hand, android is an operating system that runs on Linux; specifically designed for smartphones and tablets. Jim Hines, research director at Gartner said:

“Android Auto and Apple CarPlay was a way of giving consumers what they wanted without letting Google or Apple through the gate. But now, Android as the operating system, well that’s really the heart of the system”

The first two car-manufacturers to openly announce their interest in Android-powered car were Audi and Volvo. Both companies have partnered with Google ahead of the I/O Developer’s Conference. At the conference, Google will display the implementation of its system in two cars; Audi Q8 and Volvo V90.

According to a spokesman, Volvo is expected to use Android Auto in its cars in a period of two years. However, Audi isn’t thinking the same. According to another spokeswoman, Audi hasn’t given a final decision and is currently thinking about the matter. The implementation of Android in its cars is not finalized.

In the previous years, different car-manufactures such as Honda, Hyundai and GM have used android systems in their cars. Google has also shared its resources with other manufacturers like implementing Google Earth in the default software of different cars. However, this implementation in Audi vehicles took almost a year to be successful. With the availability of the Android Auto, the development time-span will be reduced and it might lower the cost of development for car-manufacturers.

“We’re hoping we see the same kind of pick up and innovation that we saw in smartphones when Android came out. It was the time when people were churning out smartphones at a dizzying rate. We think we’ll see the same thing in automotive, where cars can innovate faster and come to market faster”

“I feel it’s reasonable, where in the future, most of the cars have an infotainment system powered by Android. A car is a pretty important computer that a person interacts with on a daily basis”

He said that a person in the US spends on average 50 plus minutes in their car every day.

“If they’re using Google services in the car, whether it is Google maps or Google Assistant and they have a good experience, they’re more likely to use those services on other devices, where maybe we do have a way to monetize through ads or something else”

Google is also working on its self-driving car project: Waymo. Android Auto received the same hype of interest as did Waymo after its announcement.  With the arrival of Android-powered car, it is expected that both projects will one day merge.

Stating the fact that Google has currently no further plans to work with Waymo, Brady said:

“You do need an infotainment platform even in self-driving cars we think. A modern platform like Android gives you the ability to do more seamlessly integrate with the car. We think there are a lot of opportunities out there”