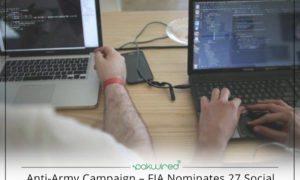 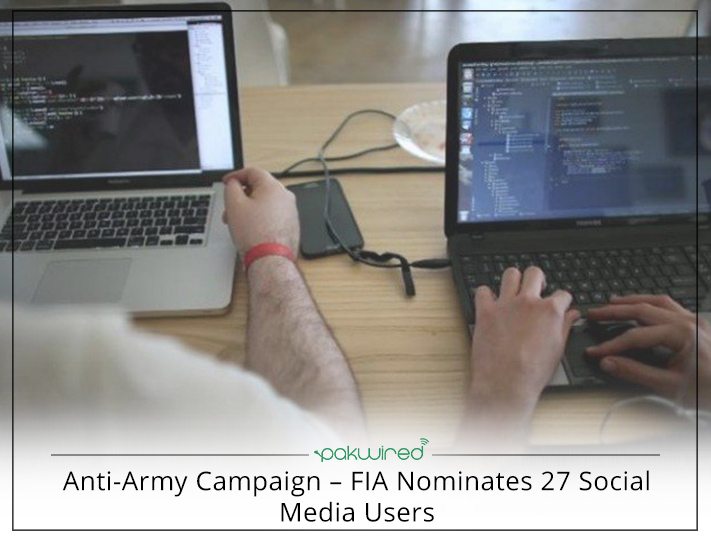 The Federal Investigation Agency (FIA) has nominated 27 people in its ongoing investigation into posts that have been allegedly termed as anti-army. The organization believes that these social media accounts are deliberately promoting anti-army sentiment and have labeled it as ‘a meticulous campaign to malign Pakistan army’. FIA will be submitting a detailed report on the subject matter to interior ministry with in next 14 days.

Initial reports suggest that FIA has primarily identified 27 people who are actively participating in the anti-army campaign. Seven out of these have been called for further investigation and questions. Personal electronic equipment in use has been seized and is now undergoing a detailed forensic analysis. The list of the personal items confiscated includes laptops, smartphones, and tablets.

Only a fortnight ago FIA was involved in the arrest and release of six suspects who were accused of propaganda campaigns. None of the six however were formally charged for alleged propaganda.

A case of Suppressing Political Parties?

FIA has stated that all 27 people under investigation have strong political affiliations and are deeply rooted to political parties. The PMLN government has maintained a strong stance against Social Media and maintains that the move isn’t politically motivated. Only earlier this year the government was involved in a comprehensive action against Social Media accounts that were deemed as spreading blasphemous content on the internet.

PTI has been vocal on social media about its workers being harassed under the guise of a ‘draconian cyber bill’.

The crack-down became a major focal point when the Interior Minister Ch. Nisar highlighted the issue in local media.

Reports are suggesting that FIA cyber-crime wing is leading the investigations while on-ground investigation and apprehensions are being carried out by counter terrorism wing. Security officials have raised reservations against social media accounts which are being operated from foreign soil.